PHOTO: Palmyra and its Roman-era ruins

Ban told a news conference in Amman, Jordan that “the extremist terrorists, they have been not only killing brutally people, they have been destroying human civilizations”.

The UN head said he was encouraged that the Assad regime “will try to not only preserve and protect, but try to restore” the ancient city.

UPDATE 1750 GMT: An AFP reporter says damage in the Roman area of Palmyra is not as great as feared:

The situation in the caravan ancient city of #Palmyra is good beyond expectations. The destruction is partial… pic.twitter.com/7ACJNglUdB

The regime’s head of antiquities, Maamoun Abdulkarim, said, “We were expecting the worst. But the landscape, in general, is in good shape.”

He said that the Roman architecture including the Agora, theater, and walls was lightly damaged. The most significant damage was at Palmyra Castle, amid the ground battles and Russian airstrikes.

During its 10-month occupation of Palmyra, the Islamic State blew up some structures, including two important shrines.

UPDATE 1300 GMT: President Assad has celebrated the capture of Palmyra with a visiting French delegation, according to State news agency SANA.

Assad hailed the advance as “an important achievement and new evidence of the effectiveness of the strategy followed by the Syrian army and its allies in the war against terrorism”. He said this was highlighted in contrast to the US-led coalition with “its lack of seriousness…and the very little it has achieved”.

The President also denounced “wrong policies and inadequate concepts” by governments such as France, including “unfair economic sanctions”.

State media also said that, in a phone call from President Vladimir Putin, Assad thanked him for Russia’s airstrikes which made victory possible.

“Palmyra was demolished more than once through the centuries…and we will restore it anew so it will be a treasure of cultural heritage for the world,” Assad said, according to State TV.

The Kremlin said Putin congratulated Assad and “stressed that, despite the withdrawal of the bulk of Russia’s military contingent from Syria, Russia’s forces will continue to help the Syrian authorities in their anti-terrorist efforts”.

Kremlin spokesman Dmitry Peskov also said, “Assad highly valued the help Russian air forces have provided and underlined that such successes as regaining Palmyra would have been impossible without Russia’s support.”

ORIGINAL ENTRY: Syrian State media reports that pro-Assad forces have captured Palmyra, the Roman-era city in central Syria held by the Islamic State since May 2015.

A “military source” said the army and its “militia allies” — Hezbollah, Iranian Revolutionary Guards, and Iraqi and Afghan militia, enabled by scores of Russian airstrikes — took “complete control over the city of Palmyra”.

The pro-Assad forces have advanced on Palmyra for weeks, finally entering the city on Saturday.

The number of casualties on both sides is unknown. However, on Saturday pro-regime outlets circulated a list of 110 confirmed casualties among regime troops. The majority of the dead were from Tartous, a coastal area on the Mediterranean which is mainly populated by Alawites, the sect to which President Assad and his family belong.

Opposition-Rebel Warning to UN Over Negotiations

The lead opposition-rebel negotiator, Mohammad Alloush, has effectively warned UN envoy Staffan de Mistura that rebels will return to the battlefield if political talks are not satisfactory.

Alloush sent the signal through a message to the commander of the leading rebel faction Ahrar al-Sham, Mohannad al-Masri, calling on him to “unite with others” on the frontlines.

Alloush was responding to the document circulated by de Mistura as discussions were adjourned on Thursday in Geneva. He said to al-Masri that battlefield readiness “is the only language can be understood”.

Our great people had not authorized anyone to sign for their surrender. We did not come out in defense of our people temporarily to save them from the barrel bombs, and to leave them to be killed later under torture in a new version of the current regime within its prisons.

Scene of a car bomb in opposition-held Sarmada in Idlib Province which killed at least five people:

President Assad poses for a selfie with Julien Rochedy, a far-right French politician.

Rochedy, a former head of the National Youth Front, arrived in Damascus on Saturday with a delegation of French activists. 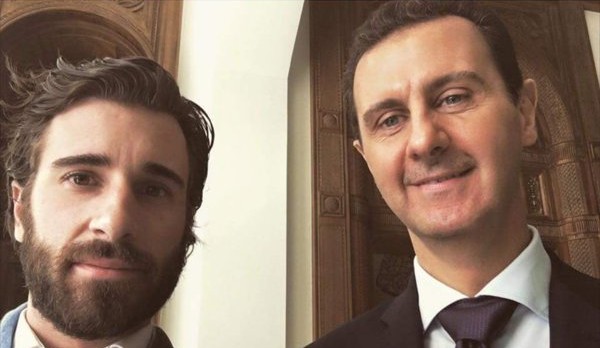