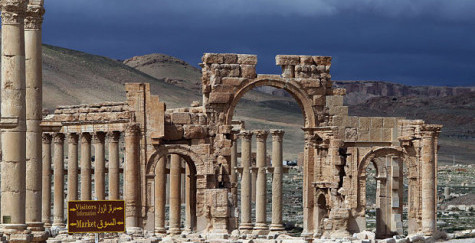 PHOTO: The Roman-era city of Palmyra before its destruction by the Islamic State and the recent Russian-regime offensive

A Russian-regime offensive on the Islamic State in Palmyra has “left entire neighborhoods flattened”, according to a resident who has fled the Roman-era city in central Syria.

“With the regime’s ‘scorched earth’ policy, we are seeing hundreds of rockets and shells a day,” the resident told Syria Direct.

The Syrian army, enabled by Russian bombing, has attacked the area near Palmyra for weeks. Hezbollah units were moved to the front last week, and a pro-regime website said on Sunday that elements of Iran’s Revolutionary Guards have joined the offensive.

The Islamic State moved into Palmyra, famed as an oasis stop on the Silk Road, last May after a rapid advance through eastern Homs Province.

Pro-regime outlets have hailed the capture of hills around the city in the past month. The resident said the assault was from three directions, with the regime forces only 2 km to the west. While he expected the fall of Palmyra, “the desert terrain and sandstorms are posing obstacles” for the offensive.

The extent of casualties on each side is unknown. On Monday at least 17 regime troops were killed, according to the pro-regime Al-Masdar News. However, a pro-regime battlefield correspondent claimed that the detachment of Syrian Marines was struck by a vehicle-borne bomb, posting video:

Palmyra is destroyed….With the regime’s “scorched earth” policy, we are seeing hundreds of rockets and shells a day, either from planes or ground artillery and mortars. This bombardment has flattened entire neighborhoods.

He said most Islamic State troops, including those killed recently, are teenagers from the city, although there are also “there are also some other Arab fighters”.

The resident said of Palmyra’s Roman architecture, including shrines, arches, and columns blown up by the Islamic State after their occupation:

IS destroyed a number of them with explosives, as you know. Russian and regime bombings have also struck them. Say goodbye to Palmyra’s ruins, they’ve been completely disfigured and destroyed.