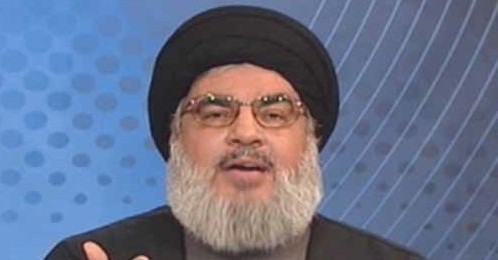 Speaking to Al-Mayadeen TV, Nasrallah said that, in any war with “the Zionists”, Hezbollah would strike all Israeli “petrochemical factories, biological institutes, and nuclear stores”.

He advised Israel’s residents to “ask your government that does not care about you to move the dangerous facilities from the residential areas”.

He hailed Hezbollah’s ability to hit Israel with rockets and pointed to the tactic of kidnapping Israel’s troops, “The Israelis do not abandon the hostages and corpses taken by their enemies; this gives a chance for the Resistance to press the Zionist entity through this factor.”

Nasrallah vigorously defended Hezbollah’s intervention in Syria’s conflict, as well as the military role of Iran and Syria. He said that fighters would remain until there was a favorable political solution: “We will not let the Americans and their allies obtain politically what they failed to get in the battlefield.”

The Hezbollah leader said the Russian launch of airstrikes from September 30, supporting foreign-led regime offensives, was discussed before six months before implementation.

However, he gave an unusual explanation for President Vladimir Putin’s surprise announcement on March 14 of the withdrawal of “most” Russian forces, saying that it was due to a decrease in Russian-Turkish tensions.