PHOTO: President Putin: “Literally, within a few hour, Russia can build up its military”

Trying to hold the political initiative, Russian President Vladimir Putin said on Thursday that Moscow can restore its military presence in Syria within hours.

On Monday, as political talks resumed in Geneva, Putin put out the surprise announcement that Moscow will withdraw “most” of its warplanes and military “advisors”. He declared — even though the supposed focus of Russian operations, the Islamic State, still holds much of Syria — that “general objectives” have been achieved.

At a Kremlin awards ceremony yesterday, Putin said that he hoped that the talks would succeed, but continued:

If necessary, literally within a few hours, Russia can build up its contingent in the region to a size proportionate to the situation developing there and use the entire arsenal of capabilities at our disposal.

He said that Russian operations against “terrorist” groups will continue: “I’m sure that we will see new and serious successes in the near future.” In particular, he noted the Syrian regime’s attempt to regain the Roman-era city of Palmyra, captured by the Islamic State last May.

He also warned other powers that Russia will continue to protect its Hmeimem airbase in western Syria, citing the advanced S-400 air defense system and declaring that he would not hesitate to shoot down “any target” which violated Syrian airspace.

For the first time, Putin gave a cost for the Russian operations — 33 billion rubles ($481.89 million) — with more expenditure to replace ammunition and weapons and to make repairs.

Meanwhile, in an initiative spurred by Russia, the Kurdish Democratic Union Party (PYD) and its allies confirmed their pursuit of a “Federation of North Syria” on Thursday.

About 200 Kurdish representatives attended the two-day meeting in Hasakah Province in eastern Syria.

Russia first broached the idea of a federal system last month, soon after the PYD opened an office in Moscow. The Russians have also pressed for the PYD’s leaders to be accepted in the Geneva talks.

Despite its reliance on Moscow, the Assad regime again rejected the federal initiative on Thursday. The Foreign Ministry said, “Raising the issue of a federation or that of federalization would affect the territorial integrity of Syria, which goes against the Constitution, the national concepts and international resolutions.”

No party or any single component can take such a unilateral decision as the right to do so is owned by Syrian people as a whole. One of the primary goals of the Syrian revolution is to enable the Syrian people to freely decide the shape of their country without influence from any side.

Turkey, which believes the PYD is led by the Turkish Kurdish insurgency PKK, has also criticized the announcement, and the US State Department has expressed caution.

Opposition: Regime Should Replace Its Delegation with “Senior Group”

The opposition-rebel Higher Negotiations Committee has urged the Assad regime to replace its delegation at the Geneva talks with one which “can take decisions in the hot matters” and the application of UN resolutions.

HNC spokesperson Salem al-Muslet said the current delegation, led by UN Ambassador Bashar al-Jaafari, is not “serious enough” to deal with the issues.

UN envoy Staffan de Mistura met the HNC for the third time on Friday, with the opposition-rebel bloc presenting him with a series of questions about a political resolution.

Earlier on Friday, de Mistura had talks with the regime group for 2 1/2 hours. Jaafari declined to answer questions from reporters afterwards.

Fighters from the leading rebel faction Ahrar al-Sham have clashed with the jihadists of Jund al-Aqsa over a memorial for the death of a high-ranking Islamic State official.

The firefight erupted on Thursday night in Sarmin in Idlib Province in northwest Syria, following Jund al-Aqsa’s attempt to set up a mourning tent for Hassan Abboud, the leader of the faction Liwa Dawood.

Abboud died earlier this week of injuries from a roadside bomb near Aleppo. He was accused of leading assassins who targeted rebels in northwest Syria.

Liwa Dawoud defected to ISIS in July 2014, reportedly crossing through regime checkpoints on their way from rebel-controlled Idlib Province to Islamic State territory.

For the third Friday in a row, “Revolution Continues” protests are being held across Syria.

The march in the Damascus suburb of Barzeh: 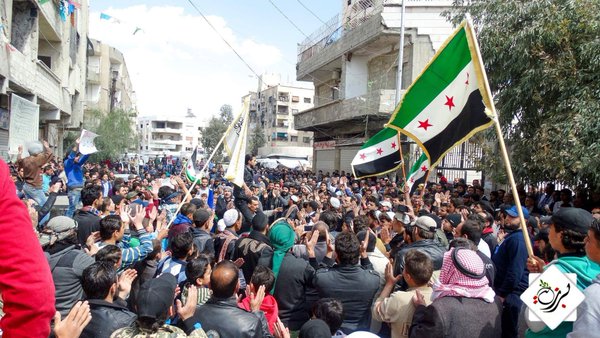 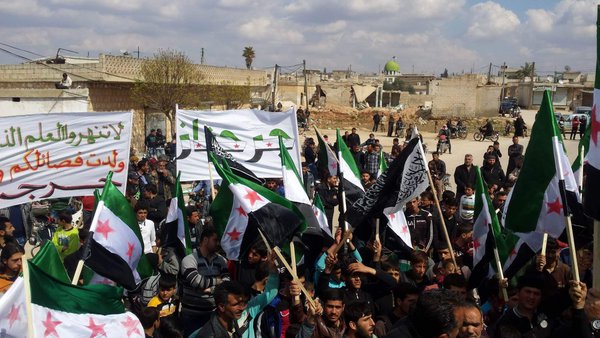 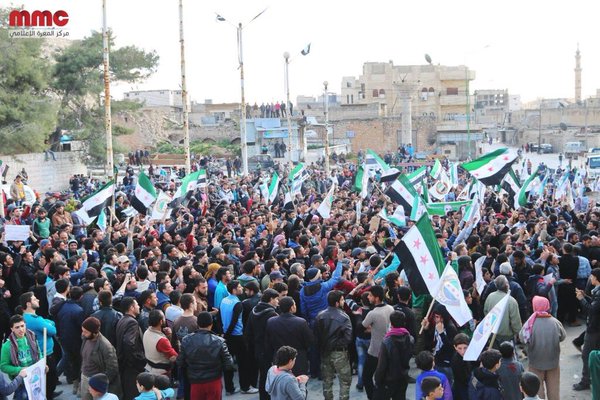 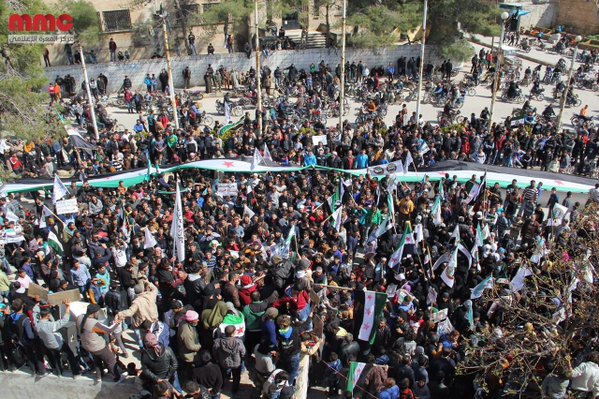 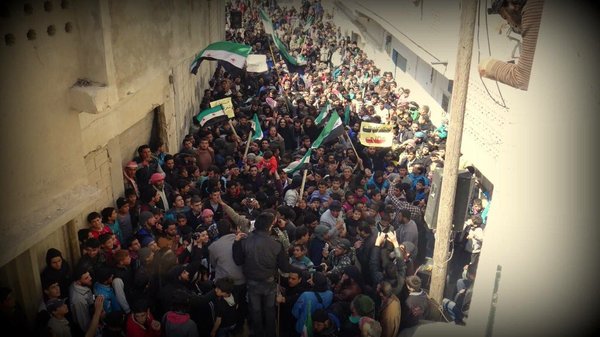 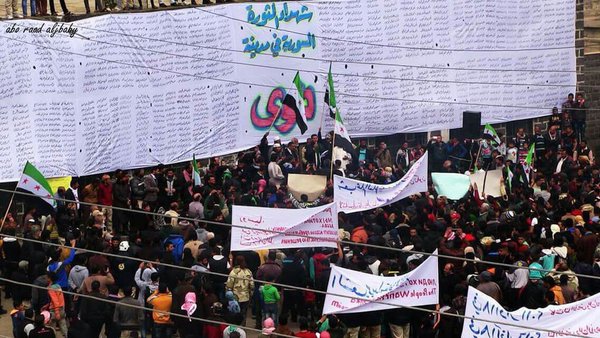