Syria Op-Ed: The US Has No Plan B to Deal with Russia and Iran’s Plan A 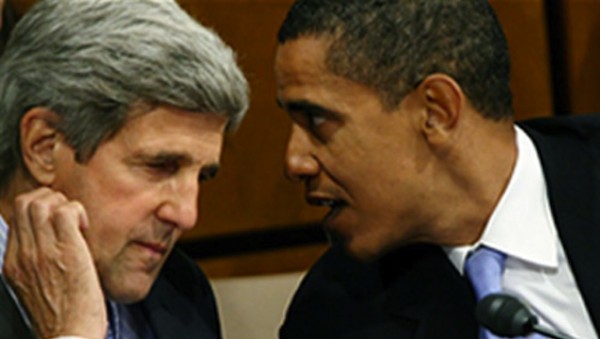 With no more than a smile and a shoeshine, Secretary of State John Kerry seeks to persuade Russia to do the right thing by Syria: to force its client Assad regime to lift sieges on a million helpless civilians; to wind down a Russian Air Force campaign stampeding terrified Syrians in the direction of Turkey; and to support all-Syrian negotiations that can produce a transitional governing body to unify the country against the Islamic State. Perhaps Russian President Vladimir Putin will take pity on Syrians and the United States of America. This is what it will take for Washington’s Syria strategy to work. There is no leverage. There is no Plan B.

Instead, there is a fundamental asymmetry that has been in place since the start of the Syrian crisis in 2011. Russia and Iran have wanted Bashar al-Assad politically alive far more than Washington has wanted him dead. This might have been a manageable state of affairs if what was happening in Syria had only stayed in Syria.

In the summer of 2013 after the red line had been defiantly crossed via a major chemical atrocity, thinking that cruise missile strikes against Assad’s instruments of terror would put him on the slippery slope to invasion and occupation and perhaps alienate Iran, the American President panicked, backed down, and permitted Russia to broker a chemical weapons deal that enabled Assad to double down on mass homicide and make a mockery of a February 2014 Geneva peace conference.

Iran, on the other hand, needed Assad in place to guarantee Syrian support for Hezbollah, its Lebanese militia. In addition to its own Revolutionary Guard Forces on the ground, it brought foreign fighters to Syria from Lebanon, Iraq, and Afghanistan to support a regime it saw as the sole Syrian constituency for subordination to Tehran. Moscow, for its part, identified Syria as the red line beyond which an alleged regime change and democratization jihad by Washington would not pass. When Putin saw Assad losing ground in the summer of 2015, he intervened with his air force and some ground troops. To the extent he measured risk, Washington was not a factor.

Indeed, Putin’s contempt for the West — not just the Obama Administration — is immeasurable. He calculates that some combination of Russian aggression, Western passivity, and winter weather can decisively neutralize the Syrian opposition and produce the Assad-ISIL face-off that would force the United States to hold its nose, work with the premier war criminal of the twenty-first century, and swear off regime change forever.

No doubt Putin perceives Washington’s collaboration with the Kurdish YPG militia — Syria’s branch of the terrorist PKK, working closely also with Russia and the Assad regime — as a dress rehearsal for the biggest show of all: Assad’s army and the American Air Force hand-in-hand against the Islamic State. As Putin sees it, Washington is eager to work with the Syrian affiliate of a terrorist threat to a NATO ally because it so desperately wants to neutralize the Islamic State, but has done nothing at all to configure a professional ground force to confront “Caliph” Abu Bakr al-Baghdadi. All that passes for a ground force is a Kurdish militia. Arab opponents of Assad and ISIL are now being pounded by Russian bombs. From Putin’s perspective, if Washington likes the YPG, it will love Assad’s army.

Forcing Obama to eat his “step aside” words and embrace Assad is Putin’s dream of the ultimate diplomatic triumph: the announcement to the world that Russia is back and in charge. If he is as smart as he thinks he is, he will begin to vector elements of his own air force and Assad’s army in the direction of Islamic State positions, calling on the United States and the anti-ISIL coalition it leads to support the “legitimate Syrian government” in its battle against the false caliph. One can only imagine the agonizing contortions of the White House spin operation if this scenario unfolds. How to explain collaborating with a war criminal who midwifed the Islamic State in Syria and whose atrocities supercharge its ability to recruit? How to explain nearly five years of anti-Assad rhetoric?

In the meantime, however, Putin’s choice is (a) continue to help Assad kill off anyone but ISIL, or (b) facilitate the cessation of hostilities to which he permitted his foreign minister to agree. Putin will be sorely tempted to press home his military momentum, forcing tens of thousands of refugees toward Turkey and ideally toward Western Europe. He sees the impact the refugee crisis is having on the politics of Western Europe and he likes what he sees: the emptying of Syria prompting the rise of crude, nativist Putinesque politicos in European capitals. He may think he can undermine NATO and subvert democratic Europe in ways the Soviet Union could only dream of. One hopes Putin will respond positively to John Kerry’s pleas. One suspects he will not.

Washington is not blind to Putin’s games. The “re-set” with Russia is long gone, perhaps not to return during the lifetime of anyone reading these words. President Obama has mandated the reinvigoration of America’s military posture in Europe, something any mainstream successor is likely to embrace and deepen.

But Syria — unless Russia responds positively to John Kerry’s plea for a tourniquet — will remain an open arterial wound. Putin believes he can behave with impunity. His American counterpart has, along with many of his countrymen, convinced himself that the United States is utterly incapable of doing anything at all right militarily in the Middle East and that it is all or nothing: invade and occupy or sit on the bench. Indeed, the American president transfers his fears to Putin, warning him of a quagmire in Syria. For Barack Obama a 2003 invasion of Iraq undertaken without a civil-military stabilization plan — thereby producing a catastrophic occupation and virulent insurgency — represents all one needs to know about the efficacy of American military power in the Middle East. When it comes to that part of the world Washington might as well be San Marino.

One prays that John Kerry’s logic will carry the day. But what if it doesn’t? Surely there must be a Plan B, and surely it must transcend enhanced talking points. Clearly Syrian civilians will continue to surge toward the exits unless they are afforded protection from air assaults. Does doing so present an unsolvable military riddle? Clearly the Islamic State in Syria must be destroyed by a professional ground force before it commissions more mass murder events abroad, such as Paris, November 13, 2015. Would doing so require an all-American undertaking? Or is an American-led ground force coalition being built?

John Kerry is trying to build a solid edifice without tools. This is an unacceptable state of affairs for all but three parties: Russia, Iran, and the Assad regime. It should be unacceptable to his boss as well.