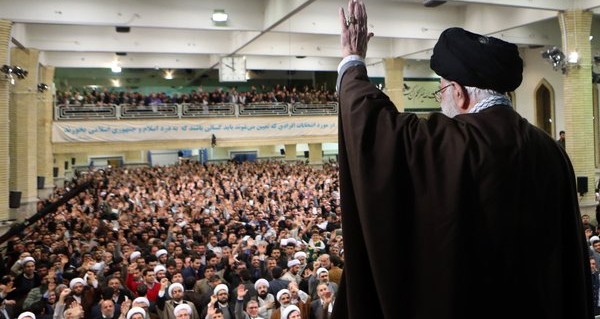 PHOTO: Supreme Leader addresses an audience in Tehran on Wednesday

Hours after the confirmation of a list of candidates for February 26 elections for Parliament, Iran’s Supreme Leader has put out another warning of a foreign-led plot to undermine the vote.

Ayatollah Khamenei’s statement on Wednesday to visitors from the East Azarbaijan Province was the latest declaration of possible “sedition”, as hardliners try to prevent the success of a centrist-reformist bloc in the vote.

Khamenei was specifically defending the Guardian Council. The 12 members of the Council — appointed by the Supreme Leader and the judiciary — which has disqualified almost half of the candidates for the 290-member Majlis and 80% of the applicants for the Assembly of Experts, the 88-member body which chooses the Leader.

The Council has been widely criticized for the purge of candidates. It initially disqualified almost all of the 3,000 reformists standing for Parliament, although some were reinstated after discussions with the Rouhani Government.

Among those barred from standing for the Assembly were Hassan Khomeini, the grandson of the founder of the Islamic Republic; Khomeini’s father-in-law, Mohammad Mousavi-Bojnourdi; and Ayatollah Mahmoud Amjad, a leading scholar on religion and ethics.

Khamenei: US Will Challenge Guardian Council

The Supreme Leader said on Wednesday:

Since the first day of the [Islamic] Revolution, Americans have opposed certain basic organs, including the Guardian Council, but they could not do away with it. Now they want to call into question its decisions. They want to keep the country in a four-year legal vacuum.

Khamenei said the enemy seeks to distract Iranians from its “evil objectives” and called on nation to remain vigilant.

In a further warning against any criticism, the Supreme Leader said most of those who repeat the enemy’s “disparaging remarks” about the Guardian Council are “ignorant” of actions which sabotage the the elections, Parliament, and the legislative process.

Hardliners are hoping to block the emergence of a centrist bloc around President Rouhani and former President Hashemi Rafsanjani, possibly allied from reformists, from the February 26 ballot.

The Guardian Council’s ban on reformist candidates had limited that possibility; however, on Tuesday leading reformist Mohammad Reza Aref said those candidate who had been approved would accompany centrists in a joint election list.