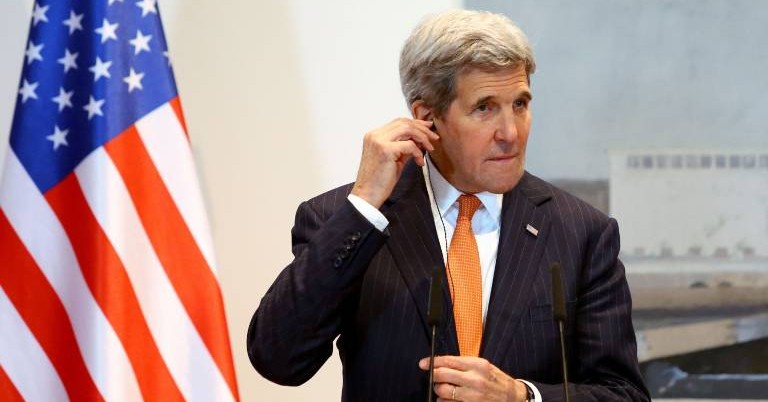 PHOTO: US Secretary of State John Kerry “Groups That Oppose Truce Plan Can Be Targeted”

Less than three weeks after blaming the opposition-rebel bloc for the failure of talks in Geneva, US Secretary of State John Kerry has apparently threatened it with the prospect of attacks if they do not accept a plan for “cessation of hostilities” set out by the International Syria Support Group:

Kerry issued the warning as he said that he and his Russian counterpart Sergei Lavrov “have reached a provisional agreement in principle on the terms of a cessation of hostilities that could begin in the coming days”.

Speaking at a news conference in Amman with Jordanian Foreign Minister Nasser Judeh, Kerry asserted, “We are closer to a ceasefire today than we have been,” said Kerry, who was also to meet King Abdullah.

Kerry refused to go into detail about unresolved issues, saying that parties were “filling out the details”. He cautioned that fighting would continue as the cessation was implemented:

I do not believe that in the next few days, during which time we try to bring this into effect, there is somehow going to be a tipping point with respect to what is happening on the ground….The opposition has made clear their determination to fight back [against foreign-led regime offensives].

The International Syria Support Group said on February 11 that it had reached agreement on pursuit of a “cessation of hostilities”, to begin within seven days. However, there was no sign this weekend of any progress towards ceasefires. There was one set of aid deliveries to besieged areas across Syria, but no confirmation that the blockades would be lifted.

The opposition-rebel High Negotiations Committee has said that ceasefires and an end to sieges must be confirmed before talks with the Assad regime can begin. This weekend, the HNC suggested a temporary ceasefire of two to three weeks with a halt to all bombardment; however, it said that the halt would also have to apply to attacks on the jihadists of Jabhat al-Nusra, who have positions in opposition-held territory.

Talking to aid workers in London on February 4, a day after talks in Geneva were suspended, “Don’t blame me — go and blame your opposition” for the lack of progress.

Kerry said he anticipated three months of Russian and regime bombing during which time “the opposition will be decimated”.

The Secretary of State did say on Sunday that the Syrian President had to leave power: “With Assad there this war cannot and will not end.”