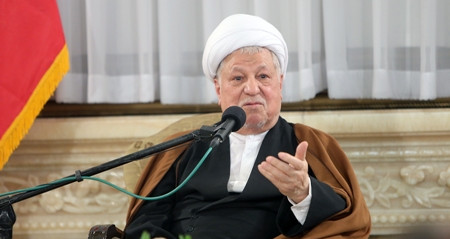 Former President Hashemi Rafsanjani has challenged the latest attempt to discredit Iran’s centrist-reformist bloc for February 26 elections, rejecting allegations that Britain is behind certain candidates on the bloc’s joint list.

“Such interpretations regarding a British list are an insult to Iranian people’s wisdom,” Rafsanjani said in a meeting with candidates.

He said that, far from being a conspiracy, a political coalition was a common approach in many parts of the world.

Hardline and some conservative politicians, military commanders, and clerics — including the Supreme Leader — have spent the past week proclaiming the danger of the US and Britain undermining the elections for Parliament and the Assembly of Experts.

Britain has received particular attention because of the coverage of BBC Persian, with Friday Prayer leaders declaring London’s plans.

On Saturday, the head of the armed forces, General Hassan Firouzabadi said, “Such interference is [part of] aggressive strategies adopted by the US and Britain toward the Iranian nation, and the country’s officials should not underestimate it.”

The military followed with criticism of the Foreign Ministry — led by the centrist Mohammad Javad Zarif — of “silence” over Britain’s “Satanic voice”. The Ministry responded later in the day by denouncing any British intervention and proclaiming the Iranian people’s vigilance.

Last month, the Guardian Council — appointed by the Supreme Leader and the judiciary — tried to check the centrist-reformist movement as it disqualified thousands of candidates for the 290-seat Parliament and the 88-member Assembly, which chooses the Supreme Leader.

The purges almost guarantee that the Assembly will not move to the center, and that Rafsanjani will fail to regain the chair that he held from 2007 to 2011. However, hardline and conservative concerns over Parliament persist as the centrists and the 90 approved reformists put together lists to ensure competition in the ballot.

Rafsanjani again protested the disqualifications on Monday, noting that 500 “knowledgeable theologians and seminarians” — including the grandson of the Islamic Republic’s founder, Ayatollah Khomeini — as well as university instructors were banned.

Filmmaker Karimi Given 1 Year in Prison and 223 Lashes

Keyvan Karimi, an Iranian Kurdish documentary filmmaker, has been given a 1-year prison sentence, 223 lashes, and a fine of 1 million rials (about $700) for “insulting the sacred”.

Karimi’s initial six-year prison sentence, handed down in October, was reduced by an Appeals Court to 12 months and a five-year suspended prison term.

The filmmaker will be forced to endure 223 lashes because the Appeals Court upheld the charge of “having illegitimate relations by kissing the face and shaking hands” with a woman who is not a relative.

Karimi’s prosecution was prompted by his film, Neveshtan Rooy-e Shahr (Writing on the City), about graffiti in Tehran. Some of the scenes refer to the protests after the disputed 2009 Presidential election, mentioning the Green Movement that led the movement for reform and rights.

The documentary was refused release even though it was produced by Tehran University and had footage from the archives of regime institutions such as the Martyrs Foundation, the Islamic Revolution Foundation, and the Center for Islamic Studies.

Karimi argued in court that his film was never screened nor distributed so, if no one saw it, there were no grounds for the charge of insult.