Iran Special: Regime In-Fighting and the “Spontaneous” Attack on the Saudi Embassy 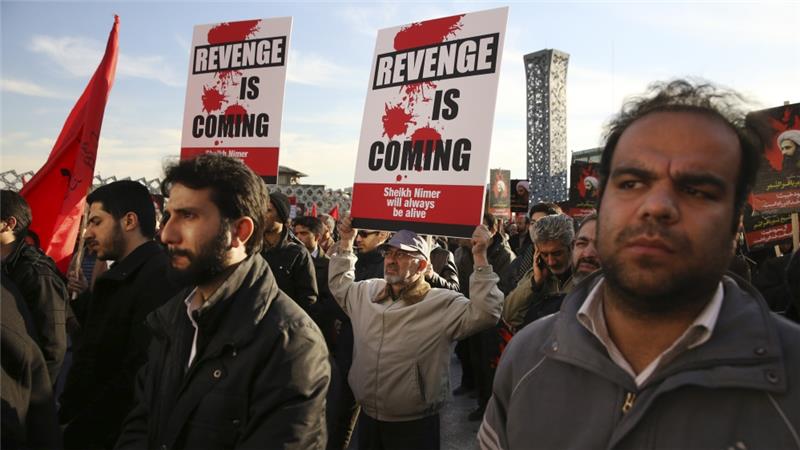 PHOTO: A demonstration in Tehran against Saudi Arabia’s execution of a Shia cleric (AP)

The answer to that mystery could be significant for Saudi-Iranian relations. But it is probably even more important for the in-fighting that is escalating within Iran’s regime, less than two months before elections for Parliament and the Assembly of Experts.

While the Islamic Republic tries to present a united face to the world, leading officials recognize this. President Rouhani denounced the attack only hours after it occurred — and now he has been joined by senior clerics, MPs, and even members of the Revolutionary Guards.

Of course, the official story from the regime is that the late-night protest that burned and ransacked an annex of the Saudi Embassy was solely the idea of the demonstrators. As a sign of their responsibility, more than 50 people were eventually arrested.

However, the chronology of Saturday’s events, as set out by IranWire, defies that explanation.

In the morning, Saudi Arabia executed 47 detainees, including prominent Shia cleric Sheikh Nimr Baqr al-Nimr. Iranian officials immediately denounced the killings and said protests would take place on Sunday. Hardliners’ website issued their own announcements, such as the one-line posting by “Officers of the Soft War”: “At 15:00 on Sunday all gather in front of the Al-Zion Stable [the Saudi Embassy] in Tehran.”

Yet, even as the notices appeared, protesters were gathering in front of the Embassy, calling the Saudi monarchy “jackals of the Zionists”. By 5 p.m., at least three layers of Diplomatic Police were protecting the complex. Some even began to paint over the anti-Saudi graffiti on the walls.

The demonstrators dispersed. But then, curiously, so did the Diplomatic Police. At the same time — and in contrast to the supposed calm — the Saudis evacuated the Embassy, either as a precautionary measure or because they anticipated what was about to happen.

By 10 p.m., another crowd had gathered. Some of the men were armed with stones or bows and arrows, and had covered their faces with keffiyehs — the patterned cloths often associated with Palestinian protesters.

Soon Molotov cocktails were being thrown, setting the Embassy alight. The Diplomatic Police had appeared, but did not intervene. A policeman was quoted on social media saying, “We have been told not to obstruct them too much.”

At 11 p.m., the protesters broke through the compound gates and entered the embassy. While some took pictures of documents and others took souvenir selfies, offices were ransacked.

An hour after pictures of the attack began to circulate online, Diplomatic Police forced attackers to leave the Embassy. About 30 minutes after that, the Tehran Police commander announced that some had been arrested and would be charged. 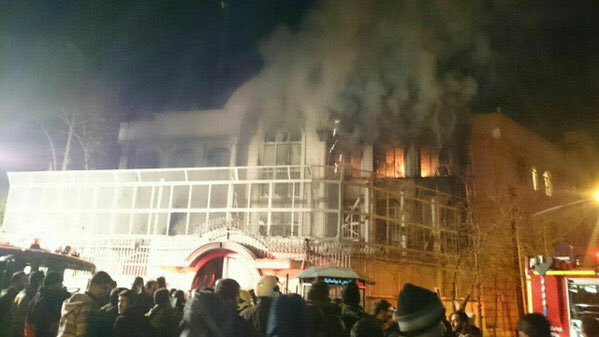 Who Organized the Protests?

The initial line of Iranian authorities was that the demonstrations were spontaneous, with no organization or direction by any faction. A member of Parliament’s National Security Committee, Ahmad Shohani, set out the line:

What happened at the Saudi embassy wasn’t pre-meditated. The people were emotional after the execution of Al-Nimr, a Shiite cleric, and so certain individuals decided to take a stand, which the government confronted.

However, with questions and even criticism arising inside Iran over the attack, officials have stepped back. Even the Revolutionary Guards, while insisting that there had been no involvement of “faithful forces”, called the demonstrations “completely organized” and said they were the responsibility of an unnamed person or group.

There is no shortage of suspects. Iran’s Basij paramilitary organization, with millions of volunteers, has the capability to create protests at short notice. Elements of the Revolutionary Guards, opposing both any development of links with Saudi Arabia and President Rouhani’s policies, may have had incentive to stir some unrest. Supporters of former President Mahmoud Ahmadinejad, who have a track record of “spontaneous” appearances including the harassment of other Iranian politicians and clerics, may have acted. Other hardline factions, with their opposition to the Rouhani Government, may have seen the possibility of making a point through “soft war”.

None of this is to deny widespread anger amongst Iranians over the Saudi executions and the desire to protest the killings. The question here, however, is who might have seized political advantage by using that anger and organizing a public show aimed not only at Saudi Arabia but at others inside Iran. 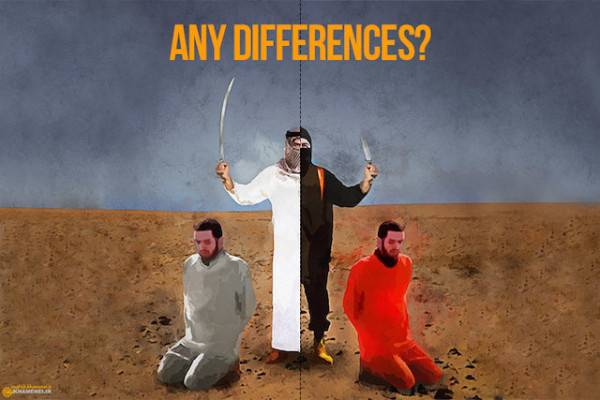 It is unlikely that any culprits behind Saturday night’s attacks — beyond about 50 individuals who were detained to show a belated response over the violence — will be identified. Instead, it is the ripples from the event that will grow in significance, given the in-fighting ahead of February’s key elections for Parliament and the Assembly of Experts.

Throughout Sunday, the regime maintained the offensive against Saudi Arabia. The Supreme Leader promised that “divine vengeance will befall Saudi politicians”.

The wave of rhetoric threatened to wash away President Rouhani. Having advocated engagement with Saudi Arabia since he took office in August 2013 and amid his fight with Iran’s hardliners, Rouhani tried to salvage his position with the denunciation of “the action by a number of extremist people” and the call for them to be identified and prosecuted.

But the President was soon overtaken by the Saudi decision to cut relations with Iran. Head of judiciary Sadegh Larijani accused Riyadh of “the most evil plots” on behalf of hegemonic powers and colonialists, serving “the interests of Israel and the US”. Iranian State media heralded more protests — in this case, non-violent — in front of the Saudi Embassy.

Then on Monday, the tone in Tehran began to shift. Some MPs turned their criticism on the protests. The Deputy Speaker of Parliament, Hassan Aboutorabi Fard, promised that “perpetrators” …will be seriously dealt with” and said the Interior Ministry “must monitor these types of issues and take appropriate actions… to prevent the outbreak of such issues”.

An editorial in Alef News — linked to MP Ahmad Tavakoli, a cousin of Speaker of Parliament Ali Larijani and head of judiciary Sadegh Larijani — said the episode had shown the negligence of law enforcement. Without naming those who might have supported the attack, it noted that this had not been approved by the Supreme Leader, “unlike [the protesters] entering the English embassy” in 2011.

Perhaps most significantly, a leading conservative cleric, Grand Ayatollah Nasser Makarem Shirazi called the sacking “unpleasant”. Hinting at the responsibility of others within the regime, he urged “friends to be in control of their nerves”.

Bolstered by the turn in commentary, the Government pressed the President’s initial line against “extremists”. Spokesman Mohammad Bagher Nobakht reiterated disapproval of the attack. The Interior Ministry called the events “regrettable” and said orders had been given to police and security services “to adopt the necessary measures…to prevent actions potentially caused by hurt feelings”.

The reassessment has less to do with second thoughts about Saudi Arabia — heated criticism of Riyadh is continuing — and more to do with the regime’s concerns about political and economic repercussions at a critical moment inside Iran.

With the economy still crippled by sanctions and mismanagement, the Rouhani Government is hoping for relief this month. Verification of Iran’s compliance with the terms of the July 14 nuclear deal would begin the process of lifting US and European restrictions, with the hope of unfrozen assets, a recovery in oil exports, and an influx of foreign investment.

But that verification is not guaranteed. Last week, before the Embassy attack, a dispute with the US surged over Iran’s ballistic missile program and the possibility of new American sanctions. Now the Saudi affair could over the plans for the International Atomic Energy Agency’s all-clear.

Using the Supreme Leader’s slogan of the “Resistance Economy”, hardliners have said that Iran will cope if the deal does not proceed and sanctions continue. The Revolutionary Guards, with extensive economic interests, are wary of a recovery that comes with foreign investment and competition. However, those groups may be shaken with the prospect that persistent — and worsening — economic hardship may become reality.

Then there is the bitter political contest that has taken shape since the autumn, with the hardliners and some conservatives challenging the Government. Concerned about a possible bloc around Rouhani and former President Hashemi Rafsanjani in the elections, the critics — including the commander of the Revolutionary Guards, senior clerics, head of judiciary Larijani, and prominent MPs — have accused political rivals such as Rafsanjani of trying to foster “sedition” and said Government officials are appeasing efforts which could undermine the Islamic Republic.

While the Saudi affair has destroyed what was left of Rouhani’s foreign policy of “engagement”, it is also threatening to overtake that hardline message. On Sunday, the Supreme Leader accused the US of seeking to influence the February elections in pursuit of regime change. The speech was soon pushed aside, however, by the Saudi breaking of relations and the regime’s response.

Of course, the hardliners could try to weld the messages together: rhetoric about “US-Zionist-Saudi” conspiracies is far from new. But doing so, they could risk the support of Iranians who have suffered the economic and political damage from years of confrontation. And if enough of those Iranians reject the lines and vote for a “moderate” alternative, even the manipulations of the Islamic Republic’s system might not be able to stop them, as Rouhani’s election in 2013 demonstrated.

On Tuesday, acknowledgement of the domestic political situation came from an unusual outlet, Foreign Ministry spokesman Hossein Jabari Ansari, as he wrote in an editorial:

There are speculations that certain groups at home who are opposed to the Joint Comprehensive Plan of Action [the nuclear deal] resort to such approaches in a bid to create obstacles in the way of the government’s diplomacy.

But we should bear in mind that foreign policy issues are like national and sovereignty-related questions. These questions — either JCPOA or relations with regional and international powers — are national issues which should be excluded from partisan and factional bickering.

For now, the safest course for Rouhani’s opponents in that battle is to join the criticism of Saturday’s attack. They can tut-tut that those responsible should be punished, knowing that any regime faction which was involved will not be exposed.

The Iranian-Saudi dispute will continue on the diplomatic stage, with each side seeking advantage in regional crises such as Syria and Yemen as well in the broader arena of international opinion. But inside Iran, the consensus will now be to push last weekend’s events into the background — even as that consensus is only to re-establish the ground for the political battles between hardliners, the Revolutionary Guards, and the Rouhani Government.