US Special: How Trump Went from Professional Wrestling to Presidential Campaign 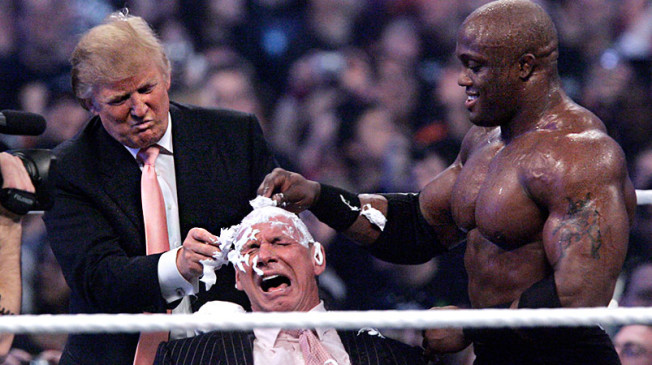 Donald Trump enters with a swagger into the arena. He shouts at his opponent, “I’m taller than you. I’m better-looking than you. I think I’m stronger than you.” He boasts, “I don’t know if you’ve seen the latest poll. I saw the other night — John Travolta, he prefers Trump. I see others prefer Trump.”

But this is not Donald Trump at a Republican Presidential debate in December 2015.

This is Donald Trump as a World Wrestling Entertainment star in 2007.

Before Barack Obama stepped foot in the White House, Trump’s foe was WWE owner Vince McMahon — the husband of Linda McMahon, Connecticut’s Republican candidate for the US Senate in 2010:

The Donald isn’t just mouth, of course. He’s ready to put his hair and his body on the line in a match at Wrestlemania, telling McMahon, “I will kick your ass.” McMahon — no doubt, in Trump’s view, because he is a wimp just like Jeb Bush in 2015 — declines. Instead, each man will have a proxy in the ring, and the loser will have his head shaved:

In a 22-minute show, the two men confirm “The Battle of The Billionaires”, with McMahon getting all Marco Rubio on The Donald: “This is one deal that Donald Trump is going to be really sorry that he is going to sign.” Is Trump worried? Of course not, as he strolls to the arena to the tune of “Money” with two lovely women by his side (5:20 mark):

Trump eventually got the best of McMahon on the business side, forcing Vince to concede, “You’re smarter than me.” But — just like the Republican primaries are only a step towards the White House — that’s not the end of the story: The Donald has even rougher tactics up his sleeve (0:55 mark):

Professional wrestling has always been a soap opera for Americans to see themselves and the world — think of villains like the Japanese Mr Fuji and Tojo Yamamoto, the Soviet Nikolai Volkoff, the traitorous Sergeant Slaughter and his Iraqi managers General Adnan and Colonel Mustafa during the 1991 Gulf War.

But could it be more? Could Donald Trump — now a member of the WWE Hall of Fame — have appreciated that it is a very real platform to clothesline his opponents and win over the American people (as long as they are not Muslim) in 2016?