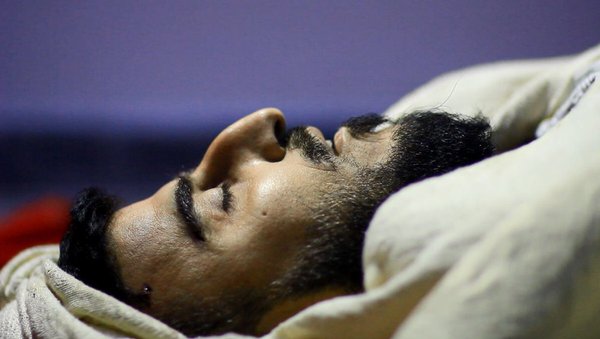 PHOTO: Zahran Alloush, leader of the rebel faction Jaish al-Islam, after he was killed by an airstrike on Friday

Zahran Alloush, the former leader of Jaish al-Islam who was killed by Russian air strikes on Friday evening near Damascus, was more widely mourned than any other opposition figure since the start of the Syrian conflict. He has also been condemned for having made sectarian statements alluding to the extermination of Shia in Syria.

Sectarian statements are unjustifiable because they stoke tensions in an already polarised landscape. Jaish al-Islam was guilty of playing a cynical game of religious one-upmanship against extremist groups, especially at the height of religious polarisation in late 2013, during the Hezbollah-led offensive inside Syria. But it is a mistake to equate the group with extremist organisations, especially since such statements by no means reflect the group’s intentions or actions.

People who met Alloush and members of his faction, including members of Syria’s religious minorities, challenged such perceived views. Bassam Malouf, a Christian dissident, for example, recalled a meeting he had with Alloush, in which the former warned against targeting Christian churches in the suburbs of Damascus where the faction operated. Alloush replied, according to Mr Malouf, referring to Christians, by saying: “You are part of us and we are part of you. We will not allow anybody to violate the sanctity of homes, churches or people. Even Alawites, they are not our enemies, they are victims of the regime.”

Mr Malouf added: “His religious discourse was meant to encourage young people living under siege to join Jaish al-Islam and pull them away from ISIL [the Islamic State].”

Alloush was one of the earliest, if not the earliest, rebel leader to unequivocally and consistently combat ISIL. Unlike other forces that reluctantly or intermittently fought ISIL, Jaish Al Islam can be credited for single-handedly preventing ISIL from establishing a foothold for itself in the areas it controlled near Damascus. If ISIL is a minor player at the outskirts of Damascus, it is because of Jaish Al Islam.

The fact that Jaish al-Islam was led by a religious cleric often confuses observers. The organisation represents the conservative religious strand that existed in the Ghouta region many decades before the rise of the Baath party in Syria. It is part of the social character of that area.

Alloush was a student of one of the icons of modern Salafism, Nassereddin al-Albani, a Syrian cleric of Albanian descent, and a known critic of the Muslim Brotherhood and so-called jihadists. The tensions that often surface between Jaish al-Islam and other military factions reflect existing social tensions in those towns. Jaish al-Islam broadly subscribes to traditional Salafi norms widely observed in the Ghouta, while another group, Ajnad al-Sham, represents the Sufi movement that has also existed in that region for nearly a century, known as Jamaat Zayd, or Zayd Group.

While the two factions often cooperate on the battlefield, perhaps more consistently than anywhere else in the country, they are still rivals. Any deviation from the two established strands is temporary and driven by the unimaginable suffering that residents of the Damascus suburbs go through on a daily basis, which has sometimes included chemical weapons.

The two strands represent century-old organic movements and thus cannot be simply dismissed. This reality was one of the key factors behind the regime’s inability to subdue these towns despite an unparalleled campaign of starvation, siege, shelling, and bombardment, and despite the fact that some of the government’s most elite forces operate not far from those territories. That reality will also ensure the survival of such forces, including Jaish al-Islam.

The choice of Issam al-Buwaydani as the group’s new leader will help it recover quickly: Buwaydani was a founding leader of the first incarnation of Jaish Al Islam, Siriyyat al-Islam, or the Islam Brigade, and was a field commander since its inception. Besides his military credentials, he too comes from a well-established Damascus family who received religious training under local clerics.

The widespread mourning of the former leader — including by his foremost rivals, with the exception of ISIL, which cheered his death — might deflate existing tensions. It will also probably increase military cooperation, which was recently undermined by disagreements, rivalry and measured hostility. More importantly, Alloush had in principle accepted a proposed ceasefire with the regime but was targeted shortly after. That might bring closer different positions on how to deal with the regime, a sentiment already expressed by Syrians who mourned his death.

Polarised views about Alloush’s legacy befit the status of such an influential rebel leader whose death also marks the end of a chapter in the conflict and the beginning of a new – and uncertain – one. Regardless of how he is perceived by parochial observers of the conflict, his legacy is already being judged by those he fought for.