France Analysis: To Defeat ISIS, Paris Must Change Its Strategy from Syria to Iran to Israel 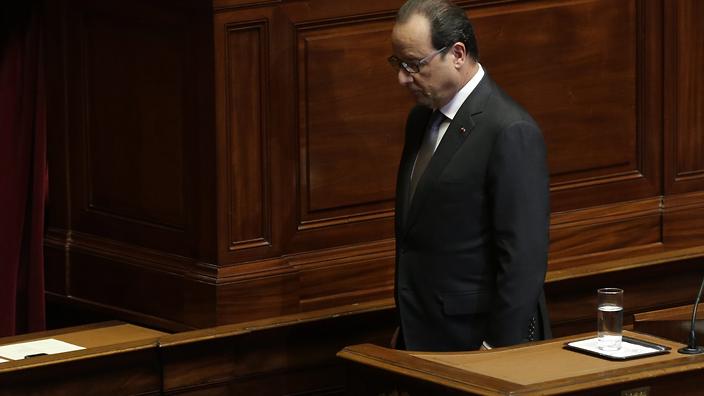 PHOTO: French President Francois Hollande at his address to the Congress, November 16

In the second part of his analysis, Makinsky turns to the changes in regional strategy that are needed to meet the threat of ISIS:

The Islamic State’s attacks in Paris on November 13 have changed French politics and society. We no longer face an internal threat with an effective counter-terrorism strategy frustrated by inadequate or counter-productive domestic policies and structures such as an outdated criminal code, insufficient resources for marginalized communities, and prisons that foster radicalization.

This is a strategic change, with the Islamic State opening a front inside our borders. As soon as France joined the air campaign against ISIS in Iraq, Paris was included in the camp of the enemy which has to be eliminated. It took its place in an Islamic State reorientation in which, last year, Abu Bakr al-Baghdadi had called on his “brothers” to go beyond their current territory and should fight abroad. Europe is no longer a “secondary” battlefield.

France has to respond with an appreciation of the political, economic, and social challenge within, as I noted in Part 1 of this analysis. But if the Islamic State has come to Europe, France — and others — also have to go abroad in their strategic approach. We have to rethink long-held assumptions about Iran, Syria, Iraq, and the wider Middle East.

Western countries have to promptly revise strategy with regards to both the Syrian and Iraqi crises. We have no choice but to build cooperation with Iran.

Despite the Supreme Leader’s stated opposition to any further cooperation with the US beyond the nuclear deal, it is pretty clear that Iran will seek some paths towards a dialogue, as shown with the Iraqi-mediated agreement on procedures to ensure against accidents between US and Iranian aircraft and the entry of Iran –– over Saudi objections –– into multilateral talks on Syria’s future.

There are already quiet exchanges of views on Syria between US and Iran diplomats. Even Iran’s Revolutionary Guards, deeply engaged against the Islamic State on both the Syrian and Iraqi fronts, may well be interested in exploring ways of discreetly enhancing cooperation, possibly sharing intelligence related to attacks contemplated by the Islamic State in Europe and elsewhere.

We should rid ourselves of the myth of “reasonable” or “moderate” Islamists who are considered by some in the US and France as Bashar al-Assad’s valuable foes, while democratic opponents lack credibility because of the weakness of more secular, Western-minded opposition forces. In this myth, “moderate” Islamists should be (and sometimes were) supplied with weapons and various other kinds of support, but as soon as the aid was received, it has been transferred to Al-Qa’eda’s Syrian branch, Jabhat al-Nusra, or the Islamic State in exchange for money, prisoners, or safe passage. The so-called border between “respectable” Islamists and radical jihadists has been untenable in practice.

While working on a politically inclusive settlement to Syria’s civil war, Washington and the Europeans must be very clear about who poses the great threat to security — the Islamic State — and who is most capable of fighting against it.

In Baghdad a joint intelligence center including Russia, Iran, Iraq, and Syria has been set up to upgrade the accuracy of air and ground operations. But regional actors’ capabilities are limited: to compensate for the weakness of regular armed forces, Iran’s Revolutionary Guards have relied on Shia militias which are efficient on the ground but sectarian, brutal, and unprofessional.This makes it very difficult to persuade Sunni groups to fight ISIS, especially when these factions complain that they did not receive weapons from the Iraqi government.

This problem may be overcome hopefully with the help of competent advisors, including those from Western countries, and a combination of pressure — including for improvement of governance, tribal openness, and anti-corruption policy — and support.

Washington has decided to increase its assistance with more special forces, but this can only be a part of wider address of the challenge by the US and Europeans.

Saudi Arabia and the Gulf States

Saudi Arabia should be advised to make a genuine choice: fight ISIS and Al Qa’eda or be officially treated as their ally in the kingdom’s regional rivalry with Iran.

Washington has already taken an important step by persuading Riyadh to join the Vienna conferences on Syria. But this is only a beginning. Sensing a risk of isolation, and suffering a tarnished image following the Mecca stampede, the Kingdom is trying to show that it is not only a “warrior” State but also a regional actor capable of diplomatic strategy. Saudi Arabia has said it will set up a conference which will gather all components of the Syrian opposition by mid-December. The credibility of such an initiative remains to be seen.

Meanwhile, the Kingdom’s intervention in Yemen is a strategic error, as the vacuums created by the Saudi-led campaign have been filled in important ways by ISIS and Al Qa’eda. That result is not compatible with Western interests, and with the security of other regional actors. The West must make that message clear.

We should also assess whether other Gulf States — notably Kuwait, the United Arab Emirates, Bahrain and Qatar, are committed as well to an effort against the Islamic State. All were supposed to fight ISIS, but with the exception of Oman, they are taking part in the Saudi-led coalition in Yemen. So, despite their initial participation in the air war against ISIS in Iraq, the Gulf States now appear to be far less engaged, if at all involved.

The West must also determine their commitment to destroying ISIS. One lever might be economic: Qatar and the UAE,in spite of their involvement in the Yemen coalition, nevertheless wish to keep good relations with Iran because shared interests in trade and energy resources.

Turkey should also be asked to make a clear choice. This will not be easy given President Recep Tayyip Erdogan’s recent electoral victory and the likelihood that he will resist any change in his strategic objectives, especially his priority that the Kurds do not benefit further from the wars in both Iraq and Syria.

In spite of having won his Parliamentary majority, Erdogan still faces serious challenges, including a lagging economy and ISIS cells within Turkey that are an ever-larger threat to the country’s internal stability. In the face of that threat,the West should insist at the very least on a serious crackdown on oil smuggling from ISIS-controlled wells into Turkey, as well as tighter enforcement of borders. There are also financial measures to be taken: ISIS has built a banking network which is mainly relying upon finance sources in Gulf States, but the Turkish banking system is not immune of flows of money linked to illicit trade of oil, weapons, and antiquities.

What to do with Hezbollah? If a political solution is reached in Syria, the group’s forces could be moved to the Iraqi front, joining Iran-controlled forces. This would bring another advantage: while fighting ISIS, Hezbollah could show that it is, as it claims, a genuine “Lebanese force” contributing to the country’s security. The recent suicide bombings in Beirut, carrying out by the Islamic State, is an incentive for Hezbollah to make this revision in strategy.

Prime Minister Benjamin Netanyahu’s strategy in Syria remains unclear: is the threat posed by Hezbollah greater than that posed by the Islamic State?

That question might be addressed by some adaptation of strategic choices. Although they give vocal support to the Syrian President, both Iran and Russia quietly acknowledge that Assad’s departure is no longer a taboo. Meanwhile, if Islamist forces gain control of Syria, Israel’s security may be put at risk. Keeping a unified Syrian State would ensure better protection for Israel than a territory under the reign of the Islamists.

In the past, Israel has been tempted to play a dangerous game to weaken only for weakening its old enemy, for example, in its tactical alliance with Saudi Arabia amid the nuclear dispute with Iran. But now, with the Islamic State becoming more of a threat to Israel’s security, and if Hezbollah shows more restraint that unpredictable Islamist factions, israel may adapt its posture to the new context.

For France, Israel’s ambiguous connection with Riyadh has generated new concern after the Paris attacks. The French Government may thus reconsider strategic relations with both countries: beyond some highly publicized arms contracts — whose actual amounts, execution, and future payment remain uncertain === what strategic advantages has France gained from its courtship of the Saudis?

Reassessment is already underway. Surprisingly, allies of former President Nicolas Sarkozy — once a fervent advocate of Bashar al-Assad’s removal, a hard-liner on Iran, and a stalwart defender of Israel and Saudi Arabia —began voicing a sudden interest in Syria’s stabilization, with Assad’s immediate departure no longer their priority. Subsequently President François Hollande accepted — officially in the context of the July 14 nuclear deal with Iran — Tehran’s participation in the Syria talks, even though Paris maintained its line that the Syrian President must depart during a political transition.

Hollande is now forced to adapt France’s posture to the fast-evolving landscape. On 16 November, during a speech about the Paris attacks to French Deputes and Senators, he announced the u-turn in French doctrine: “In Syria, our enemy is Daesh [the Islamic State].” Building a large, unified coalition against ISIS is now necessary.

With its bombing of a Russian passenger jet over Egypt’s Sinai Peninsula and the Paris attacks, ISIS may have made a strategic miscalculation leading two powers, previously in deep disagreement, to join forces. Russian President Vladimir Putin, pointing out that his French “friends” endlessly promoted Assad’s removal, wondered whether this “has protected Paris from the terrorist attack”. But the mockery did not prevent France from coordinating military operations with Moscow, with Rafale warplanes from the aircraft carrier Charles de Gaulle striking ISIS after communication channels were set up with Russian military authorities.

There are still disagreements between Hollande and Putin, as seen during their meeting last week in Moscow. Assad’s future still has to be decided, as does the process for a political solution and the militias who are acceptable allies against the Islamic State in Syria. Turkey’s downing of a Russian warplane has complicated disucssions.

But France is signalling indications of its strategic change. On November 27, the chair of Parliament’s Foreign Affairs Commission, Elisabeth Guigou, said, “French diplomacy has evolved with realism and Bashar El-Assad’s departure is no longer a prerequisite.” Foreign Minister Laurent Fabius then stated for the first time that the Syrian army could join other forces fighting the Islamic State. He later amended the position to say this must take place in the context of a political transition, but the message had already spread: destroying the regime would be a mistake.

At this point, these steps — while significant — do not come from a strategic assessment of the regional balance of power. Acquiring that strategic vision should be an urgent task. The central arena may be Syria but, in the essential task of defeating the Islamic State, long-standing relations with Iran, Saudi Arabia, and Israel all must be considered.