Syria Feature: Assad “It’s My Right To Run in Elections — If They Happen” 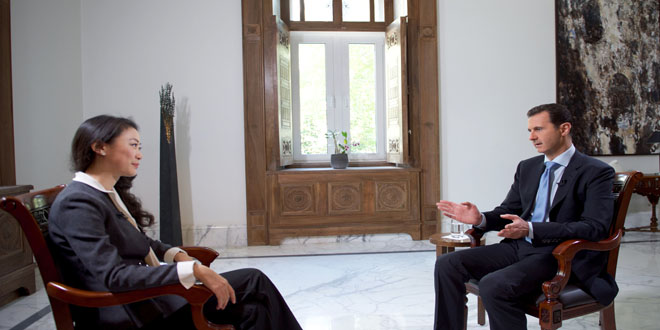 Continuing his PR offensive through interviews with foreign media, Syria’s Bashar al-Assad has pushed back the international proposal for early Presidential elections.

Assad told a Chinese TV channel that it was his “right” to run in new elections but it was “too early” to say if he would:

[That’s my right, but it’s too early to say “yes, I’m going to run” or not. That depends on how my feeling is regarding the Syrian people. I mean, do they want me or not? I might accept it or not. So, you cannot talk about something that’s going to happen maybe in the next few years.

It’s too early. Sometimes you can define it only a few months before that, but I wouldn’t say no, I wouldn’t run if I feel that.

Two sets of international discussions in Vienna, convened after political and military pressure by Assad’s ally Russia, concluded on November 14 with a declaration of an 18-month transition including ceasefires, regime-opposition talks, a new Constitution, and Presidential and Parliamentary elections. However, it did not state whether or not Assad or members of his inner circle could stand in the vote, maintaining their hold on power.

Since that declaration, Assad has used interviews with Italian and French outlets to distance himself from an early ballot, even though this was pushed by Russia and his other main ally, Iran.

See also Syria Transcript: Assad Interview — “Between Damascus and Iraq, There is Only Empty Space”

Assad said the transition could not begin before “terrorism” was defeated: “If you want to talk about after that, you can talk about a maximum of two years of implementing everything, because when you talk about dialogue, then you’re going to talk about the constitution, you need to make a referendum.”

Casting further doubt on the process, the President said there is “no tangible ‘opposition group'”, although he said there were some individuals who had “stood against the terrorists and supported their government, although they are opposition”.

Denying that there is a civil war, Assad maintained that “the [Syrian] army is making advancement in nearly every front…in many different directions and areas on the Syrian ground”.

The President’s statement reflects his relief after Russian intervention, including airstrikes on thousands of targets, began on September 30. Both in the spring and summer, Assad had shown concern over defeats at the hands of rebels and shortages of manpower for the Syrian military.

Despite his renewed optimism, the Syrian army’s offensives — supported by the Russian attacks and by Iranian commanders and fighters, Hezbollah units, and Iraqi, Pakistani, and Afghan militias — have made a significant advance only to the east and south of Aleppo city, although there are signs in recent days that the Syrian military is taking ground in northeast Latakia Province.

Asked if he had made any mistakes during the 56-month conflict, Assad said the regime’s “methodology and strategy” were correct. He said there had been tactical mistakes, giving this example: