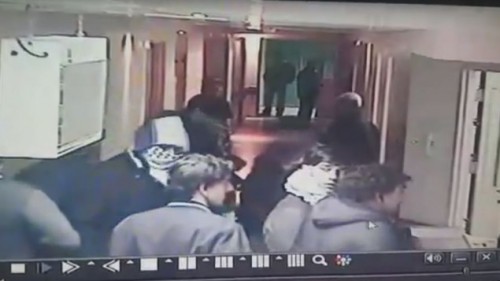 Undercover Israeli forces killed a Palestinian during a raid on a hospital in the West Bank city of Hebron on Thursday.

Azzam Ezzat Shalaldah was shot by an Israeli settler last month after he reportedly stabbed the man.

Witnesses said about 20 undercover Israeli personnel entered the hospital at 3:00 a.m. The director of the hospital said they pretended to escort a pregnant woman through the maternity ward to avoid suspicion.

According to the witnesses, the soldiers and police tied up Azzam Ezzat Shalaldah. His cousin Abdullah entered the room and was shot.

The undercover forces then left the hospital with Azzam Ezzat Shalaldah in custody.

Claimed video of the raid:

An Israeli army spokesperson said only that Abdullah Ezzat Shalaldeh was shot and injured. He said a combined army and police unit entered the hospital to detain Azzam Ezzat Shalaldah, when an “additional suspect attacked the forces”.

The spokesperson said Azzam Ezzat Shalaldah “stabbed an Israeli in the chest in [the Israeli settlement of] Gush Etzion” on October 25. The seriously-wounded Israeli shot Shalaldah as he fled the scene.

The spokesperson added that the Shalaldah family are “known Hamas operatives”.

Palestinian witnesses claim that the attacker fled the scene unharmed and that Shalaldah was working in agricultural fields when he was shot.

Abdullah Ezzat Shalaldah is the 80th Palestinian killed by Israeli forces since October. Most have been shot dead
during claimed attacks on Israeli military and civilians.

Ten Israelis have been slain by Palestinian assailants, mainly by stabbings, since the start of October.