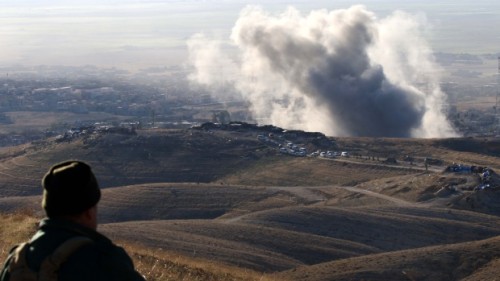 Witnesses are reporting that Kurdish peshmerga have recaptured the town of Sinjar in northwestern Iraq from the Islamic State.

Just back from an hour+ in Sinjar town. No ISIS on the streets—not even corpses. They left total destruction behind: pic.twitter.com/eR4GBQLmoq

Supported by US airstrikes, about 7,500 peshmerga launched the offensive on Thursday to retake Sinjar, seized by ISIS in August 2014.

By 7 a.m. local time on Friday, witnesses were reporting peshmerga in the center of Sinjar, raising the flags of Iraqi Kurdistan, the Kurdistan Democratic Part, and the Patriotic Union of Kurdistan

Commander Aşti Kocer confirmed the takeover and said his forces were looking for any remaining Islamic State fighters in the town.

The Kurdish military said that ISIS units had tried to counter-attack just after midnight but were hindered by US bombing.

The Islamic State’s capture of Sinjar last year forced thousands of civilians — most of them from the Yazidi religious community — to Mount Sinjar. Men were detained and executed, women enslaved, and the displaced faced thirst and starvation until they were evacuated from the mountain.

The ISIS advance in the area was a catalyst for US airdrops of aid and then bombing of the Islamic State.