Iran Daily, Nov 13: Rouhani — US Should Apologize to Tehran 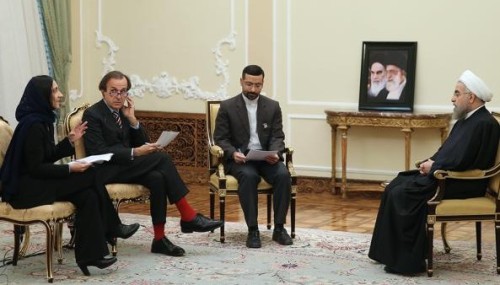 Amid in-fighting among Iran’s regime over US-supported “sedition”, President Rouhani has called on Washington to apologize again to Tehran for past actions.

In an interview with the Italian newspaper Corriere della Sera in Tehran, Rouhani said that the apology was necessary if the US wants to restore diplomatic relations with Iran:

One day these embassies will re-open but what counts is behavior and the Americans hold the key to this.

If they modify their policies, correct errors committed in these 37 years and apologize to the Iranian people, the situation will change and good things can happen.

In 2000, discussing grievances on both sides, Secretary of State Madeline Albright acknowledged the US “significant role” in the 1953 overthrow of Iran’s elected government and the American support of the Shah as he “brutally repressed political dissent”. She continued:

As President Clinton has said, the United States must bear its fair share of responsibility for the problems that have arisen in U.S.-Iranian relations. Even in more recent years, aspects of U.S. policy towards Iraq, during its conflict with Iran appear now to have been regrettably shortsighted, especially in light of our subsequent experiences with Saddam Hussein.

The President said the July 14 nuclear deal between Iran and the 5+1 Powers was a good starting point, but cautioned that the US must adhere to the terms:

If [the agreement] is well applied it can lay the foundation for fewer tensions with the United States, creating the conditions to open a new era. But if the Americans don’t respect their part of the nuclear accord, then surely our relationship will remain as it has been in the past.

Rouhani will see Italian Prime Minister Matteo Renzi, and business leaders in Rome on Saturday and Sunday as well as meeting Pope Francis in the Vatican. He then travels to Paris for discussions on Monday and Tuesday.

The President has been under pressure from Iranian hardliners over his foreign policy of “engagement” and in an escalating battle with other factions ahead of February elections for Parliament and the Assembly of Experts.

Last week the head of the Revolutionary Guards, General Mohammad Ali Jafari, warned of a “fourth sedition” and implicitly attacked the Government for its attitutes towards “the West and liberalism”. The Supreme Leader has repeatedly warned that the nuclear deal will not lead to further negotiations with the US.

The Guards have reinforced their stance on “sedition” with the arrests of journalists and businessmen.

Khosrowtaj told Russian State outlet RIA Novosti, “The loan would be applied to purveyors from Russia and buyers in Iran for the realization of projects….Now it’s the work of the banks to agree on the technical details of work in this scheme.”

Novak said Russia’s State Vnesheconombank and Iran’s Central Bank are in talks on a $2.1 billion loan, while the two countries are discussing a $5 billion intergovernmental loan.

The Russian Minister had earlier said that the $5 billion will be used for infrastructure projects, such as electrical power generation and the development of railways.

Iran’s Communications Minister Mahmoud Vaezi, in Moscow at the head of a delegation of 70 traders, discussed the loans with Russian Finance Minister Anton Siluanov and the head of the Russian Central Bank, Elvira Nabiullina.

Jannati made the remarks in a meeting with the representative of Iraqi Grand Ayatollah Ali Sistani on Thursday. The Minister insisted that Assad’s removal would lead to “Libya-like conditions” and the “disintegration” of Syria. (Alef)