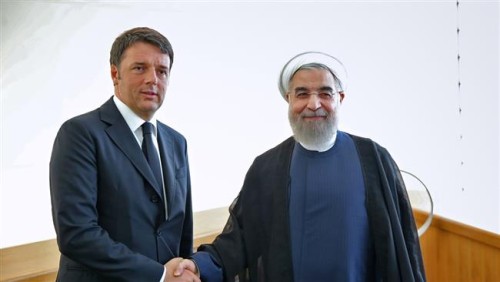 Italian Prime Minister Matteo Renzi will show off the glory of Imperial Rome to Iranian President Hassan Rouhani as he seeks to spearhead a conquest of his own: a huge share of new business in the Islamic Republic.

Rouhani’s trip is his first to the European Union since his election in 2013. He has chosen to start it in Rome, and the Italians, once Iran’s biggest European trading partners, will court him assiduously as the country returns to the international fold after the nuclear deal signed in July.

On Saturday, Renzi will escort Rouhani on a tour of frescoed halls, statues and mosaics in the Capitoline Museums that overlook the Roman Forum, heart of the ancient empire. Rouhani will also meet President Sergio Mattarella and executives of leading companies, and call on Pope Francis.

“We had a strong presence in Iran before sanctions and we aim to go back, at least, to the trade volume of that time,” Marco Simoni, economic adviser to Renzi, said in an interview. “We’re seeing contacts in many sectors like energy, infrastructure, manufacturing, machinery and food.”

Italy aims to boost trade with the Middle East’s second-biggest economy to more than the 7.2 billion-euro ($7.8 billion) peak reached before sanctions were tightened in 2011. At the time, Italy led Spain, Germany and France, according to Eurostat. Italy-Iran trade slumped to 1.2 billion euros in 2013, with Italy behind Germany. 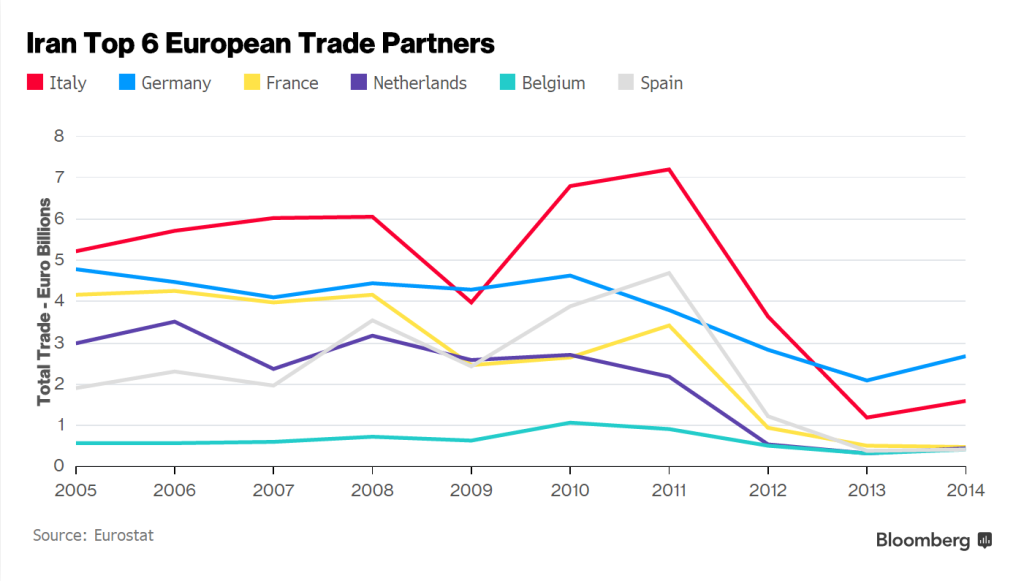 Rouhani himself struck an encouraging note on the eve of his visit.
“On international and political issues, Italian leaders have always had a moderate attitude towards us,” he told the Milan newspaper Corriere della Sera on Thursday. “Under the new conditions, Italy can be one of the most important partners for us.”

Firm Line Up To Do Business

Rouhani and his ministers for industry, infrastructure and agriculture will meet firms keen on Iran’s $415 billion economy, second only to Saudi Arabia in the Middle East.

Eni declined to comment this week on a report by the Italian news agency ANSA that it had signed a draft memorandum of understanding with the National Iranian Drilling Company to increase cooperation in the drilling sector. Iran boasts the world’s fourth-biggest oil reserves.

“It’s a question of who can get in there first and strike when the political moment is right,” said Scott Lucas, an Iran analyst and professor of international politics at Birmingham University. “The Europeans are trying to get into pole position but many have to be wary of the fact that if they have links to the United States and move too quickly, the U.S. could slap fines on them.”