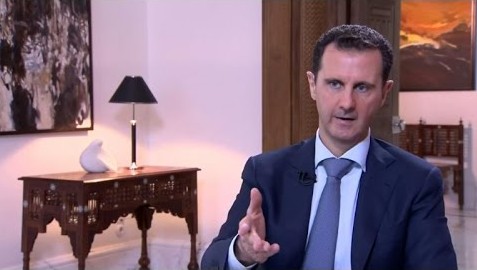 Taking a far tougher line following the launch of Russia’s airstrikes, President Assad said in a Sunday broadcast that there will be no reforms or negotiations until “terrorism” is defeated:

The only option for us now is to destroy terrorism, because implementing any solution or any political ideas that might be agreed on will need a state of stability. Otherwise it has no value.

Consequently, destroying terrorism is the foundation of any action in Syria. Political ideas can be implemented later.

Speaking to Iran’s Khabar TV, Assad denounced the opposition as driven by foreign agendas and said they cannot be part of the solution to Syria’s crisis. Paralleling Moscow’s line that rebels and the Islamic State are all “terrorists”, he said:

He hailed the Russian airstrikes, which began on Wednesday and have mainly targeted rebels, saying the success of the campaign by Moscow and his regime is “vital to save the Middle East from destruction”.

Meanwhile, the President said the policies of Western countries have failed because their officials are lost, confused, and not clear what they want.

In statements in May and July, Assad had indicated that his regime was in military trouble, pointing to difficulties in obtaining manpower for the fight. He acknowledged rebel advances that had taken much of northwest Syria and parts of the south.

In contrast, Assad made no reference to any military difficulties in Sunday’s broadcast.