Syria Daily, Oct 3: Obama Warns Russia — But What Will He Do? 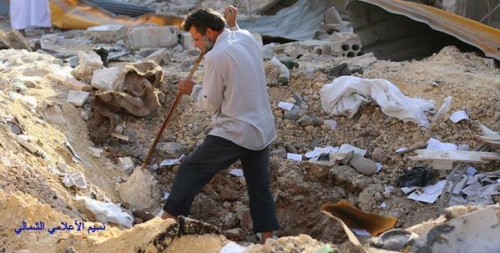 UPDATE 2010 GMT: Russia’s military said on Saturday that it has carried out more than 60 sorties over 50 Islamic State targets in three days.

“We have managed to undermine material and technical resources of the terrorists and significantly reduce their combat potential,” Colonel General Andrei Kartapolov of the Russian General Staff said. “We will not only continue the strikes by our air force but also will increase their intensity.

Kartapolov did not explain why almost all of the documented Russian airstrikes have been in areas held by Syria’s rebels, rather than ISIS.

Instead, he declared that Russia had managed to destroy ISIS command posts, warehouses with ammunition and explosives, communication hubs, training camps, and “mini-factories that made weapons for suicide bombers”.

The General said the Russian airstrikes have caused “panic”, forcing about 600 militants to abandon their positions and head to Europe.

He said Russia recommended that Washington pull out “those valuable employees who were trained at the expense of American taxpayers”, in a reference to the handful of Syrian rebels trained and equipped to fight the Islamic State, and continued, “By the way, during these contacts Americans informed us that no one but terrorists are present in this region.”

First, the Russian Defense Ministry situated the attack in Latameneh, the site of a Free Syrian Army brigade. Later, perhaps realizing that they should be upholding their claim of attacking the Islamic State, they changed the location to the IS center of Raqqa city.

However, Syrian State news agency SANA could not even get that right. They renamed the site as Jisr al-Shughour, the city near the Turkish border which is firmly under opposition control and distant from any Islamic State forces:

Russia bombs non-ISIS Lataminah, claims it's ISIS, then bombs it again and calls it Raqqa, but SANA calls it Jisr pic.twitter.com/eGJ1r1lnU5

UPDATE 1230 GMT: The White Helmets say one of its civil defense teams was hit by a Russian “double tap” airstrike on Saturday as it rescued civilians from an attack moments earlier in Ihsem in Idlib Province. At least one rescuer was killed. 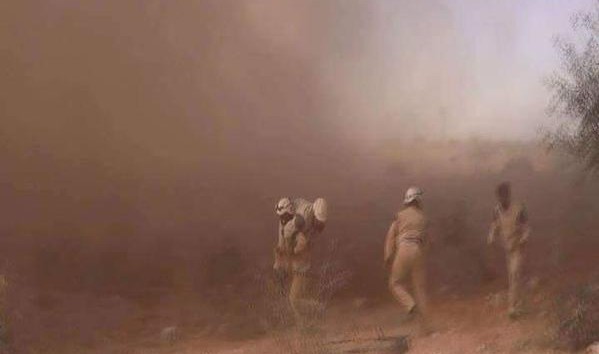 The moment of the second strike:

Footage from a helmet-mounted camera of the scene:

"Double tap"–repeat bombing–suggests that whatever Russia's initial target, it also wanted to kill the rescuers. https://t.co/WeoTFwcyXJ

ORIGINAL ENTRY: US President Barack Obama has warned Russia that its airstrikes supporting Syria’s Assad regime will draw Moscow into a quagmire — but has given no indication of American action to avert further catastrophe in the country.

The President said Moscow was failing to distinguish between the Islamic State and rebels in Syria in its attacks.

“An attempt by Russia and Iran to prop up Assad and try to pacify the population is just going to get them stuck in a quagmire and it won’t work,” Obama told a White House news conference. “From their perspective, they’re all terrorists. And that’s a recipe for disaster.”

However, the President implied that Washington would make no response, other than preventing accidental clashes between US and Russian warplanes. He said he would not turn the Syrian civil war into a “proxy war”: “This is not some superpower chessboard contest.”

Obama said President Assad was “the problem” in Syria but contended that “no amount of U.S. military engagement will solve political problems”.

He assured journalists that Russian President Vladimir Putin had to go into Syria out of “weakness” and that the U.S. has “the rest of the world” on its side.

As Russia finally took its campaign into territory held by the Islamic State — the nominal enemy for its intervention — more than 100 people were reportedly killed in eastern Aleppo Province on Friday.

The Local Coordination Committees reported confirmation of 128 deaths across the province. Opposition sites said at least 80 people died in al-Bab, held by IS since early 2014, when a marketplace was hit amid six airstrikes and eight barrel bombs. Another 20 perished in three airstrikes on Deir Hafer.

Unconfirmed reports said 12 people were killed in the city of Raqqa, the Islamic State’s central position in northern Syria.

Russia also continued its aerial assault on rebel-held territory across Homs, Hama, and Idlib Provinces in the northwest.

Moscow’s attacks, which began on Wednesday, had concentrated on opposition areas until Friday, with strikes on Free Syrian Army positions and bombing of civilian areas.

The Russian Defense Ministry did not speak about Friday’s toll in Aleppo Province. Instead, it continued to put out reports falsely claiming airstrikes on rebel-held areas as attacks on the Islamic State.

There are no Islamic State positions near Maarat al-Nu’man, which has been controlled by the opposition since autumn 2012.

Konashenkov said there were 14 sorties by Su-25 and Su-34 jet fighters on six Islamic State facilities yesterday. He also cited an attack on Latameneh in Hama Province “at a buried command center of the militants”.

Latameneh is the site of a training camp of a Free Syrian Army brigade, attacked by Russia on Wednesday.

The Assad regime has denounced the Palestinian organization Hamas — with whom it once had close links — through a “terrorist confession” on State TV.

A Palestinian-Jordanian man, Bishr Yousef Ali al-Janoudi, said in a broadcast on Thursday night that Hamas wanted to build a “Muslim Brotherhood base” through training in refugee camps and other areas in Syria.

Janoudi said that worked directly under Hamas leader Khaled Meshaal in Jordan until the organization’s offices were closed by the Jordanian authorities and it moved to Qatar. He said he was placed within Syria in early 2001.

The detainee claimed that a two-day meeting of the Muslim Brotherhood and Hamas in July 2011 inside Syria decided to support the uprising against the Assad regime, with Hamas leaders leaving Damascus.

Janoudi said training including leading rebel factions such as Ahrar al-Sham and Liwa al-Jawhid in Idlib Province from 2012. Camps were also established in East Ghouta near Damascus and in Daraa Province.

Syrian authorities raided Hamas offices in November 2012, ten months after Meshaal and other officials left the country. Hamas’s political leadership settled in Damascus in 1999 after being deported from Amman by Jordan’s newly-crowned King Abdullah II.

Rebels are claiming an advance in their offensive from southwest Syria towards the Damascus area, taking the hill of Tal al-Ahmar (see map).

The rebels launched the offensive last month, hoping to connect their lines in Quneitra Province with opposition-held areas in West Ghouta near Damascus. Success would threaten the encirclement of the capital, as the rebel faction Jaish al-Islam pursues another offensive on the northeastern side.

The Kurdish militia YPG has evacuated a headquarters in Hasakah Province in northeastern Syria as the Islamic State renews its attacks on the city.

ISIS launched an offensive on the security headquarters near Mount Abdulaziz on Friday.

“The terror group has first conducted three car bomb attacks in the vicinity of the YPG security centers in the area, then launched dozens of mortar shells on the YPG-held villages of Jafar and Dawoodiyah,” a YPG spokesman said.

The spokesman said at least six Kurdish fighters were killed and at least ten wounded.

“Our (YPG) forces have subsequently evacuated several centers to avoid the intensive fire by the ISIS terrorists,” the source said, describing the evacuation as a “tactical withdrawal”.

Kurdish forces regained Mount Abdulaziz from the Islamic State in May. The Kurds also pushed back an Islamic State offensive on Hasakah city this summer after ISIS moved into regime-controlled areas.

The protesters of Kafranbel in northwest Syria send a message to the Russian Orthdox Church, whose priests have blessed the bombing by Moscow’s warplanes: 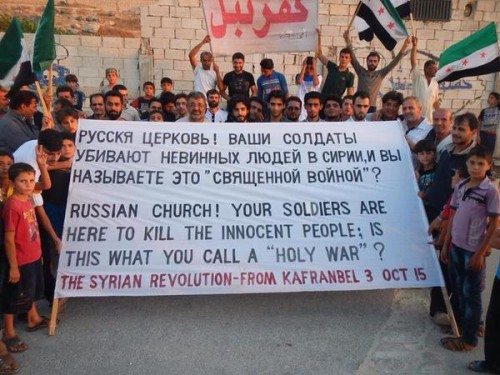 There is a comment on President Vladimir Putin’s deceptive propaganda:

Putin attacks the civilians and the FSA taking them to be ISIS while ISIS is 100 km away from us. #Syria #Kafranbel pic.twitter.com/NcuZPh3aYu

And President Obama also gets a mention:

The Syrian air force is continuing its bombardment of Douma, the town near Damascus where hundreds were killed this summer:

The Assad regime has tried for years to break rebels — including Jaish al-Islam, based in the town — and civilians through bombing and siege.

The United Nations has suspended planned humanitarian operations in Syria because of a “surge of military activity”, a spokeswoman for UN envoy Staffan de Mistura said on Friday.

The suspension including arrangements under last month’s ceasefire agreement for Zabadani in Damascus Province, after a 12-week Hezbollah-regime offensive, and for two rebel enclaves in Idlib Province in northwestern Syria.

The deal included evacuation of rebel fighters and remaining civilians in Zabadani and women, children, and men over 50 in the enclaves of al-Fu’ah and Kafraya.

“The U.N. calls on all concerned parties to fulfill their responsibilities in the protection of civilians and reach the necessary understandings in order to implement this agreement as soon as possible,” De Mistura’s office said in a statement. It did not refer to Russia’s bombing campaign.

A UN source said the Russian airstrikes hit the Homs-Hama highway, forcing the withdrawal of a U.N. team who were due to monitor the truce.

“There are now very, very serious doubts about whether the deal will happen,” the source said.

Dibeh Fakhr, a spokeswoman for the Red Cross, said attempts to evacuate the wounded had been suspended but might resume in coming days if the situation on the ground allowed.

Following Russian airstrikes, the Syrian military is preparing for an offensive northwest of Homs city, according to activists.

He said that the order applied to the villages of Jawalek, Sneisil and Al-Mahatta, which are between rebel-controlled territory in northern Homs Province and regime-controlled areas around the city.

The villages have free from clashes since a ceasefire in autumn 2014.

The opposition outlet Syrian Mirror reported an “unprecedented mobilization” of regime forces in the nearby villages of Rafeen and Khirbet al-Soda as well as the water facility near the Qazhal Bridge.

The villages are close to a road linking Homs Province and the regime’s heartland on the Mediterranean, as well as leading to the Al-Waer district of Homs, the last pocket or rebel territory in the city.

Russian and regime airstrikes targeted rebel positions in towns north of Homs city, including Talbiseh and Ghanto, near the area of the planning offensive.