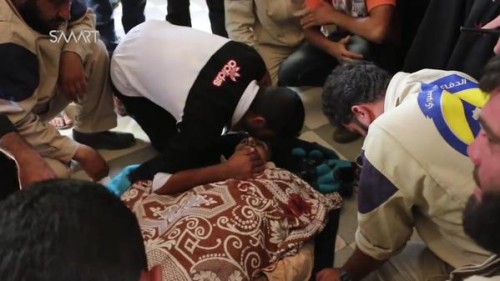 PHOTO: Men say farewell to one of the civil defense workers killed in Saturday’s Russian bombing

EA’s Political WorldView Podcast: The Pope and Putin Edition
Audio Analysis: How is Russia Presenting The Bombing Campaign to Its Own People?

UPDATE 1835 GMT: An opposition activist in Hama city claims that Russian forces have established a military center in an equestrian camp in the city.

Abu Khaled said the Syrian Army’s 4th Division handed over the camp to the Russians last week, with Moscow’s officers, specialists, and troops entering in a procession of dozens of cars and armored vehicles at night.

Activists asserted that there are more than 1050 Russians in Hama city, with 200 inside the equestrian center, and more Russians in the Syrian Army’s Regiment 45 base near Hama’s military airport.

UPDATE 1815 GMT: Rebels say hospitals in northwest Syria are being evacuated for fear of Russian bombing.

Ali al-Hafawi, a spokesperson for Ahrar al-Sham, said the Barnas Hospital in Latakia Province near the Turkish Border was closed after the bombing of another hospital 20 km (13 miles) away, as well as an airstrike on a nearby area.

Physicians for Human Rights said last month that the Assad regime carried out “an unprecedented number of attacks on medical facilities” during August, including airstrikes on nine medical facilities in Idlib Province in a four-day period.

Since the conflict started in March 2011, PHR has recorded a total of 307 attacks on 225 medical facilities, killing 670 personnel. The regime is responsible for more than 90% of the attacks.

UPDATE 1115 GMT: Russia has carried out more airstrikes on Sunday on opposition-held areas of Homs and Idlib Provinces.

The claims fit with the declaration of pro-regime websites that the Syrian military has begun its ground offensive on the Rastan Plain.

The latest attack on Talbiseh, where 50 people were reportedly killed on the first day of Russian bombing:

The Russian Ministry of Defense says bombing missions were carried out against eight targets near Jisr al-Shughour in Idlib Province on the Turkish border, converting the opposition-held area into “Islamic State” positions.

Jisr al-Shughour was captured by rebels in late April. The Islamic State has no positions within 110 km (68 miles) from the city.

ORIGINAL ENTRY: The fourth day of Russia’s bombing inside Syria was marked by more civilian deaths in opposition-held areas.

In one of the deadliest incidents, a “double tap” airstrike killed nine members of a family and two civil defense workers in Ihsem in Idlib Province, according to activists.

The Russian warplanes dropped several bombs, including on a poultry farm.. The rescuers died as a bomb struck moments after the previous attack. 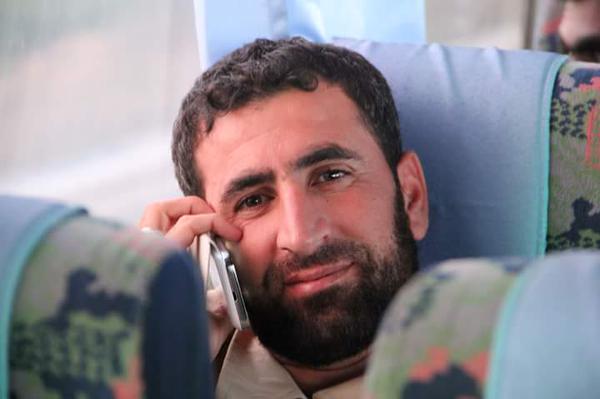 However, the Russian military continued to maintain that it was hitting only Islamic State positions, with more than 60 sorties over 50 ISIS targets since Wednesday.

“We have managed to undermine material and technical resources of the terrorists and significantly reduce their combat potential,” Colonel General Andrei Kartapolov of the Russian General Staff said. “We will not only continue the strikes by our air force but also will increase their intensity.”

The General declared that the Russian airstrikes have caused “panic”, forcing about 600 militants to abandon their positions and head to Europe.

However, despite the Russian aerial attacks, rebels made a significant advance on Saturday, capturing a strategic hill in their offensive in Quneitra Province in southwest Syria.

The rebels took the hill Tal al-Ahmar, seizing weapons and ammunition and putting more pressure on nearby regime-held villages.

The offensive, begun last month, is hoping to link rebel lines in Quneitra Province with opposition-controlled parts of West Ghouta near Damascus.

In the northeast, the Islamic State forced the Kurdish militia YPG to abandon a headquarters in Hasakah Province. The Kurds withdrew after ISIS attacked the security headquarters near Mount Abdulaziz with car bombs and mortars on Friday.

Assad: Russian Airstrikes “Vital to Save Middle East from Destruction”

In an interview with Iran’s Khabar TV, President Assad has hailed the Russian airstrikes, saying the success of the campaign by Moscow and his regime is “vital to save the Middle East from destruction”.

Assad denounced Western countries, saying their policies have failed because their officials are lost, confused, and not clear what they want.

Footage of the town of Zabadani, northwest of Damascus, after almost three months of airstrikes and a Hezbollah-regime offensive:

The Hezbollah-regime assault sought a quick victory because of rebel resistance. Last month, a ceasefire was agreed after rebels threatened to overrun the regime enclaves of al-Fu’ah and Kafraya in Idlib Province in northwest Syria.

Under the deal, rebels and remaining civilians are to be evacuated from Zabadani. However, the arrangements have been threatened by the Russian intervention that began on Wednesday.

The opposition Idlib News Network has accused the Syrian Observatory for Human Rights — often the primary or sole source for news about Syria in mainstream Western media — of paying large sums of money to informants who are actually working for the Assad regime.

The Network said in a statement that the Observatory — a British-based Syrian expatriate named Rami Abdul Rahman — had given coordinates of rebel positions that Russia bombed in its campaign starting Wednesday.

INN said that the arrangement was “no secret” to rebel factions in northern Syria. It called on rebels to “hold [the informants] accountable judicially”, exposing their identity.

Local sources say informants provided rebel positions to the regime through the SOHR’s “news” — some in good faith, some deliberately as part of their work for President Assad’s security services.

The sources said a similar situation arose in the Ghouta area near Damascus. Some informants were dealt with through “education”, but others were found to be security service agents and were detained. SOHR’s claims from the area subsequently diminished.

The Homs Liberation Movement said in a statement:

We have put all our strengths, means, and expertise at the disposal of a unified operations room to confront the Russian and Iranian occupation and to clean Syria up from the abomination of criminal Bashar [President Assad] and his cronies.

We will not stop our march until we reach our victory or martyrdom.

Russia has blocked Free Syrian Army positions in northern Homs Province, reportedly to pave the way for a ground offensive by the Syrian military.