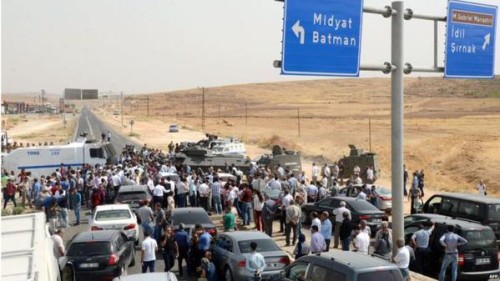 PHOTO: Residents of Cizre in southeastern Turkey are blocked by a military checkpoint

Turkey’s pro-Kurdish Peoples’ Democratic Party (HDP) warned on Thursday that the country is “increasingly drifting into a civil war”, amid Ankara’s conflict with the Kurdish insurgency PKK and a crackdown by Turkish forces on eastern and southeastern provinces.

The HDP said, “Severe clashes have taken place in many Kurdish cities such as Silopi, Lice, Şemdinli, Silvan, Yüksekova, and Cizre where the civilian population has been targeted by state forces. Tens of civilians, guerrillas and members of state security forces have died in the ensuing clashes.”

Since the end of a 19-month ceasefire in late July, fighting between the Turkish military and the PKK has escalated, as the Turkish air force bombs PKK camps in neighboring Iraq

Earlier this week, the PKK killed at least 15 Turkish soldiers with a roadside bomb in southeastern Turkey against a military convoy. Thousands of people turned out for funerals on Thursday, with top Government officials and military commanders at one of the services.

Turkish forces have responded with an effective state of emergency on eastern and southeastern provinces, preventing movement and carrying out raids. Activists says a number of civilians have been killed.

The HDP said on Thursday that all communications had been cut and the press had been blocked to prevent news about the situation. It claimed that in the district of Cizre, where a curfew is in place, 21 civilians have been killed and there are shortages of food, water, and medical care because of an effective siege by the Turkish military.

Ankara says that its forces are confronting PKK fighters in the area.

An HDP delegation — including party leader Selahattin Demirtaş, two Government ministers, and dozens of lawmakers — was prevented by security forces from marching towards Cizre both on Wednesday and Thursday.

The HDP added that its headquarters in Ankara was attacked on Tuesday, with severe damage from a fire, and that many of its other buildings have been damaged.

The Istanbul headquarters of the leading daily Hürriyet was also attacked on Sunday,

The chairwoman of Hürriyet’s board, Vuslat Doğan Sabancı, said on Thursday that journalists will not be intimidated by “primitive attempts” to suppress independent media.

The assault on the newspaper came after calls by supporters of President Recep Tayyip Erdoğan and his party AKP for a demonstration against Hürriyet, claiming that it is supporting the PKK.

Seventeen suspects in the attack have been released after questioning by police.

The US Embassy expressed its concern on Wednesday:

We are concerned by reports of violent demonstrations in Turkey; we condemn, particularly attacks against political parties or ethnic groups.

We urge Turkish citizens to adhere to democratic ideals by supporting free speech and engaging only in peaceful protests.

The Council of Europe called for access by independent observers to Cizre.

I have received reports that public life, including essential services such as healthcare, and means of communication have been severely disrupted as a result [of the curfew], and that entry and exit from the city have been barred. More disturbingly, I have also received serious allegations of disproportionate use of force by security forces against civilians.

The escalation in violence began in late July, days after the Islamic State killed 33 young activists with a suicide bomb in Suruc, close to the Syrian border. The PKK killed two policemen, accusing them of links to the Islamic State, and attacked military outposts.

The Turkish military responded with the airstrikes on PKK camps in northern Iraq, as President Erdoğan said that the “peace process” with the PKK, including a December 2013 ceasefire, was over.