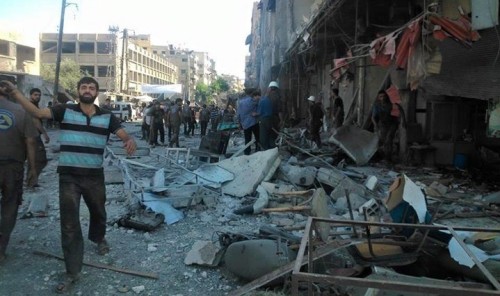 PHOTO: Destruction from a Monday airstrike on Ain Tarma near Damascus

The Local Coordination Committees reports that 63 people were killed across Syria on Monday amid continuing regime airstrikes, particularly near Damascus and in Idlib Province in the northwest.

Many of the deaths came in Ain Tarma, the Damascus suburb where hundreds were killed in the regime’s August 2013 chemical attacks. Witnesses said the strikes were with “vacuum bombs”, which use oxygen from surrounding air to generate an intense, high-temperature explosion.

The LCC said 32 people were killed in and near Damascus yesterday. Hundreds of people died in August in attacks as the Syrian military tries with sieges and airstrikes to break rebel and civilian resistance.

Another 17 people died in Idlib Province, almost all of which was captured by rebels this spring.

Among Monday’s deaths were 13 children and seven women.

Jaish al-Islam, the leading rebel faction near Damascus, has executed the leader of another group.

Citizen journalist Abdurahman Harkoush said that Abu Ali Khebbia, the head of Jaish al-Umma, and four members have been killed.

Jaish al-Islam detained Khebbia and the fighters in January on charges of corruption, drug dealing, and collaboration with the Islamic State.

The Electricity Ministry has raised prices for the poorest Syrian households.

The Ministry announced a new system on Monday combining the pricing tiers for the households using the least amount of electricity. The changes effectively double the price for those residents.

The Ministry maintained, “This measure is not classified as a price hike, but rather is merely a reform of the tier system for household consumption of electricity.”

Located in southeast Syria near the Jordanian border, Suweida has a large Druze population. The area has largely avoided the Syrian conflict; however, both rebels and the Islamic State have closed on its borders in recent months.

Claims are circulating of a second Islamic State chemical attack in northern Aleppo Province, near the Turkish border.

The militants are continuing their assault on the town of Mare’, on the frontline of fighting with rebels since January 2014.

Photos from activists show a dark, oily liquid leaking from shells. The liquid resembles that from mustard agent, which the Islamic State used in an attack on Mare’ almost two weeks ago, according to doctors and witnesses.

At least 20 people have been injured by the shelling. Some were sent to Turkey for treatment.

Airstrikes by the US-led coalition on the Islamic State have also been reported.

#Syria: victims of the #Daesh chemical attack on Mare' being treated in a local hospital. #Aleppo pic.twitter.com/zpykwtHIfB

Civil defense workers distribute thin masks — the only available protection — to people in the town:

A civil defense worker with a victim of the attack: 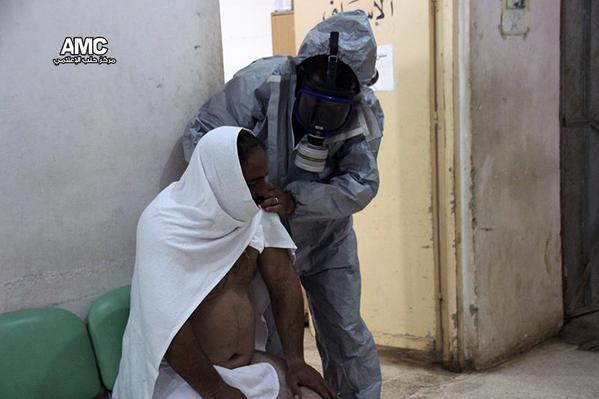 Stepping back from recent Russian initiatives for a political resolution in Syria, Foreign Minister Sergei Lavrov has declared that President Assad is a legitimate ruler despite the claims of Western politicians.

Lavrov told students and lecturers of the International State Institute of International Relations on Tuesday, “Now they are trying like previously for eliminating Saddam Hussein and Muammar Gaddafi to give the top priority on Syria to the resignation of Bashar Assad saying he is illegitimate. But he is very legitimate.”

A Russian-Iranian initiative for high-level political talks was blocked three weeks ago when Saudi Arabian Foreign Minister Adel al-Jubeir — following a meeting with Lavrov in Moscow — told a joint press conference that Assad must depart at the outset of negotiations for a transitional government.

The demand for Assad’s resignation as a precondition for the struggle against terrorism is completely unrealistic and counterproductive.

This demand is currently present in the position of a whole range of our partners. We will be able to work efficiently should this demand be lifted.

Evidence has mounted that Russia has stepped up the supply of advanced military equipment and advisors to the Assad regime in recent weeks.

The UN says that satellite images confirm the destruction by the Islamic State of a Roman-era temple in Palmyra in central Syria.

“We can confirm destruction of the main building of the Temple of Bel as well as a row of columns in its immediate vicinity,” the UN training and research agency UNITAR said on Monday.

Reports circulated over the weekend that the Islamic State had detonated 30 tons of explosives at the temple, one the largest Roman-era structure in Palmyra.

Khaled al-Homsi, a member of the Association for the Protection of Syrian Archaeology (APSA), said on Monday, “The eastern part of the temple site was destroyed, including the temple sanctuary and the sacrificial site: the principal and most important structure of the temple.”

The Temple of Bel was first dedicated in AD 32 to a triumvirate of Mesopotamian gods in Palmyra, a caravan hub and trading center for the Roman Empire.

Last week, it was confirmed that the Islamic State had damaged the nearby Temple of Baal Shamin.

A photo (left) showing the Temple of Bel on August 27, and one (right) on Monday showing the absence of the main structure: 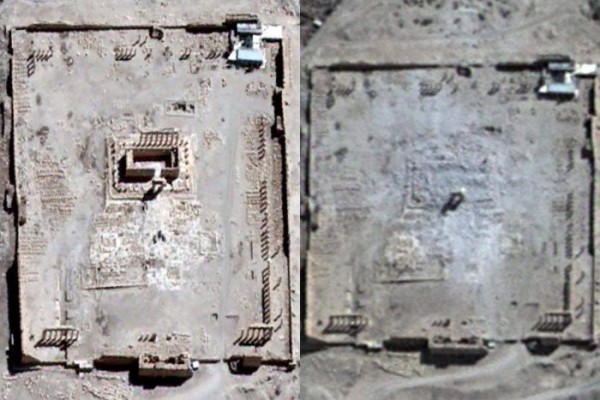