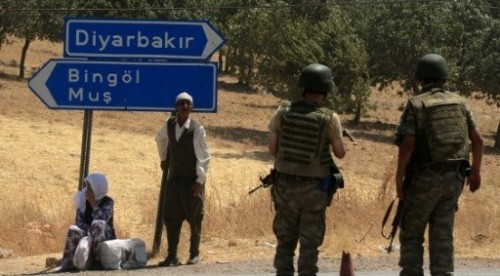 PHOTO: Turkish soldiers at a road checkpoint in southeastern Turkey

In the latest escalation of violence between the Kurdish insurgency PKK and Turkish security forces, eight soldiers have been killed by a bomb on a road in southeast Turkey.

Ankara launched airstrikes on PKK camps in northern Iraq on July 24, two days after the PKK killed two police officers, accusing them of links with the Islamic State. President Recep Tayyip declared that the “peace process”, launched in late 2013 after more than three decades of conflict with the PKK, was over.

Earlier this week, four members of the Turkish security forces were killed in clashes with the PKK in Diyarbakir Province.