Syria Interview: Refugees and the Humanitarian Crisis in Lebanon 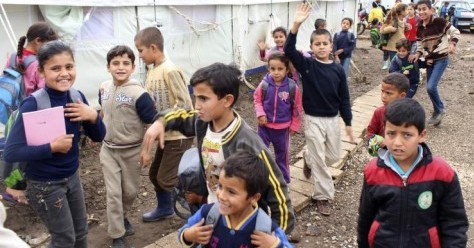 PHOTO: Syrian children at a refugee camp in Lebanon

Fabrizio Carboni, the head of the Red Cross Delegation in Lebanon, speaks with Deutsche Welle about the critical situation for Syrian refugees:

How is the situation for refugees in Lebanon?

The situation is very difficult. In the last three or four years Lebanon has received something like 1.2 million refugees, as registered by the [UN’s refugee agency] UNHCR. Even before the arrival of these refugees, health, water, energy — the whole list of public services — were all in bad shape. Now the situation is unbearable.

One sees that donors are not following anymore because there are so many crises in the world. This year we had — in addition to Syria and Iraq — Yemen, Nepal, and ebola. This year, there is not enough money to meet the needs. The UN agencies have started cutting food assistance, which is dramatic.

What does that mean?

They give food vouchers to the refugees. It was US$27 per person per month before, now it is US$13.5, which is just unmanageable. Add to this the situation with shelters. In the beginning the refugees that arrived in Lebanon had some savings, now these savings are gone. You see people moving from apartments to informal settlements to shelters, which are just unfinished buildings.

How does that affect Lebanese society?

Society is affected in different ways. First of all, you see 1.2 million refugees arriving in a country of 4 million people — that changes everything. You walk in the street and the street is different because you see different people, even in the two years since I have been in Lebanon. You see kids begging in the streets — so demographics, public services, health have all changed. Health services in Lebanon are privatized — people just cannot afford to pay for health services. The list is so long. You have 400,000 children in Lebanon and 300,000 children don’t go to school. Only 100,000 children have access to some kind of education, but not all is certified education.

These figures can not really present the human misery they represent. Most refugees are not allowed to work so they are just waiting for assistance. If the assistance doesn’t come, they go to negative coping mechanisms [like] prostitution, taking kids from school and putting them to work. They are abused because their rights are not respected. So you see the spiral downward and you don’t know where it stops.

What kind of work does the International Committee of the Red Cross (ICRC) do in Lebanon at the moment?

No organization can face and manage such an overwhelming situation alone. We focus on areas where we feel we have some legitimacy and expertise or where we can do things in a cheaper way.

For instance, we visit all places of detention and prisons. Prisons obviously are affected by overcrowding. We work inside the prisons with the authorities to find ways to make overcrowding bearable. That means encouraging them to find strategies to reduce the number of people in prison. Prisons are also very old so we work on renovating the prisons.

We also work in clinics on the ventilation and sanitation system and with water. The other field is health. In Lebanon, we run a service for weapon-wounded. The service goes from fresh-wound treatment but we also go into reconstructive surgery, physiotherapy and, if needed, we help them with prostheses. We provide psychological support, too.

In addition, we also want to transfer knowledge to our colleagues in Lebanon with the hope of creating a center of expertise.

Is it difficult to do this kind of work because, as you were mentioning, there are not enough donations and donors?

We try to focus, and health is priority number one. Why is it a priority? Because it is the only place in the region where the ICRC allowed to have its own staff carry out surgical operations. In Lebanon, because of our long history and presence, they allow us to operate with our own facilities. So we want to take advantage of this privileged position and invest in this. We want to have an impact and we can do this in health.

I can’t put it on a scale. Today, I see no solution for this massive human misery. The majority of people crossing by boat from Libya or Syria to Europe, all around the Mediterranean. These people are all Syrians. They know that they are risking their lives and the lives of their kids — nevertheless they take these risks. Its because the situation for them, if they have to go back to Syria, is just unbearable. Often refugees will tell you: “I prefer a brutal and quick death rather than agony in Syria.” I believe the whole region has reached such levels of violence and the scale of humanitarian need is overwhelming.

Do you see an end in this?

You know as a humanitarian institution we just buy time, but it’s up to politicians to propose solutions. I assume we will be in this situation for another four to five years, even if a peace agreement is signed today, because the destruction is such that it will take years to recover.