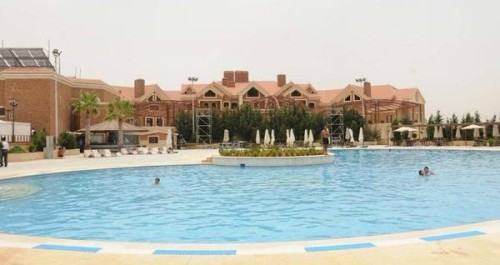 War might be raging across Syria. More than 300,000 people might be dead and half the population displaced. The President might be clinging to power and admitting that partition of the country is a possible outcome.

But why focus on that when there is good news to be enjoyed? The Tourism Ministry and State news agency SANA come to the rescue this week:

Wadi al-Nasara is north of the Lebanese border, about 40 km (19 miles) west of Homs City. That’s good because if it were 40 kilometers to the east of Homs, even the optimistic SANA might be worried, as the Syrian Army is trying to hold back the Islamic State — last week the militants took the town of Qurayteen.

But what if — because of minor impediments like a civil war and the Islamic State — you can’t make it to Wadi al-Nasara? No problem: life is still fun, fun, fun in the capital:

From pool parties to art workshops to nights out, #Syria Event Calendar has your guide to today's events in #Damascus pic.twitter.com/f1b5yfNGhN