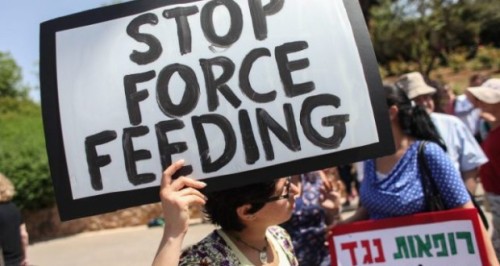 PHOTO: A protester in Jerusalem demonstrates against forced feeding of Palestinian prisoners, June 16, 2014

Israel’s authorities are preparing the first force-feeding of a Palestinian detainee since the practice was legalized last month.

Lawyer Mohammed Allan has been held without charge under administrative detention since last November. More than 50 days ago, he began a hunger strike in protest.

According to Jamil al-Khatib, Allan’s attorney, Israeli judicial officials say they plan to force feed Allan as a test case for the new law.

Physicians for Human Rights-Israel has objected, “Force-feeding violates medical ethics as it administers forceful treatment to a patient against his will, and is considered a form of torture.”

According to Israeli human rights group B’Tselem, the number of Palestinians held under administrative detention had reached 370 in June 2015.

Israel’s parliament has passed a controversial law allowing for the force-feeding of prisoners, to fierce opposition from inside and outside the country.

The measure was first proposed in 2012 in response to prolonged hunger strikes by Palestinian prisoners in administrative detention – another way of saying detention without trial or indictment.

It was revived last month by Gilad Erdan, the public security minister, and was passed on Thursday July 30 after an all-night session by a vote of 46-40.

Hunger strikes have been used as political protests by detainees and prisoners in conflicts around the world for more than a century, including suffragettes in Britain, republican prisoners in Northern Ireland, and anti-apartheid detainees in South Africa.

In the Palestinian territories they date back to the early 1970s. Most recently Palestinian administrative detainee Khader Adnan was released in July after a 56-day strike – his second after a 66-day strike in 2011-12.

Hunger strikers aim to push the prison administration or government in question to negotiate certain rights or terms of release. They depend on the fact that states are obliged under international law to maintain the health of prisoners. The state will often be caught between not wanting to negotiate and not wanting prisoners dying in custody, whether for security, public relations or humanitarian reasons. It may view force-feeding as the least worst option.

The measure has been recognised by courts in some US states as permissible, including Connecticut in 2009. The European Court of Human Rights found in favour of it in Switzerland in 2005 (but against in Ukraine and Moldova in 2007 and 2013). Courts have also recognised its permissibility in Australia and Austria. To my knowledge, however, Israel is the first state to formalise its use via legislation.

The United Nations has condemned force-feeding as cruel, inhumane and degrading – even when intended for the benefit of detainees. This is echoed by human rights groups such as Physicians for Human Rights, which maintains that force-feeding can at times be considered torture. It typically consists of imposing multiple-point restraints on a prisoner’s body while a 110cm tube is passed through the nose to the stomach.

The law passed by Israel’s parliament attempts to overcome some of the criticisms of force-feeding by authorising it only as a last resort following a strict process for obtaining permission. As the Times of Israel reports:

According to the new law, in the case of a hunger strike, a representative from the prison service, with the approval of the attorney general, can request permission from the district court to give medical assistance to a prisoner. They must prove that, according to a doctor, the health of the prisoner will be in serious danger within a short period of time because of the hunger strike….Before the treatment can be given, the law requires, every effort must be made to receive the permission of the prisoner.

It is unclear how these attempts to secure the “permission of the prisoner” would occur in practice. The requirement to show that a prisoner’s health will be in “serious danger” in a “short period of time” is largely subjective. Likewise, the “minimal amount of medical treatment necessary” is open to interpretation. Thus far, other governments have had very little to say in response to the Israeli law.

A Violation of Medical Ethics

There is one area where the measure is not ambiguous. The new law, which requires medical professionals to participate in the authorisation process, violates national and international medical ethic codes as a procedure that takes place without the consent and against the will of the patient. The World Medical Association’s 2006 Malta Declaration states that “forcible feeding is never ethically acceptable”, a view echoed by the International Committee of the Red Cross.

The Israeli Medical Association asserted last year that “forced feeding is equivalent to torture and every physician has the right to refuse to force-feed a hunger striker against his or her will”. It has issued statements against the bill and said that Israeli medical professionals will not comply. It also intends to challenge the law in the country’s Supreme Court.

Israel’s new law has implications in other contexts as well. It could lend extra legitimacy to the practice in other countries, making it more widespread and more difficult for medical personnel to refuse. The implications are particularly troubling for somewhere like Guantanamo Bay, where military doctors and nurses are ordered to force-feed detainees on hunger strike.

Though in Israel the medics will have the right to refuse, moving the Guantanamo regime a step closer to the norm risks making it respectable. As medical professionals who visited detainees in Guantanamo wrote afterwards, “Physicians at Guantanamo cannot permit the military to use them and their medical skills for political purposes and still comply with their ethical obligations”. In their view Guantanamo was increasingly becoming a “medical ethics-free zone”.

Whatever one’s perceptions of hunger strikes as a tactic, and whatever one’s views on the broader Israel-Palestine conflict, the medical community’s clear stance on this issue is very striking. It helps challenge the notion that force-feeding may be rational in extreme situations to save lives.

It underlines why this Israeli move is severely misguided and needs to be strongly confronted both by individuals and their governments around the world. Israel needs to be dissuaded from normalising force-feeding before other governments are tempted to follow suit.