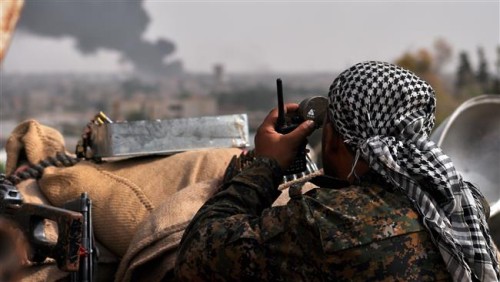 In a twist on the three-way fight for control of Hasakah in northeast Syria, the Kurdish military is accusing the Assad regime of covertly assisting the Islamic State — even as the Syrian military says that it has been repelling an IS offensive over the past month.

The Assad forces and the Kurdish YPG militia are nominally on the same side against the Islamic State, which has repeatedly tried to enter the mainly-Kurdish city this year. State media says that, after the Islamic State took parts of southern Hasakah this month, the Syrian military and YPG have coordinated a response to push back the militants. It says that Assad troops and Kurdish fighters have each taken designated areas of Hasakah in the defense of the city.

However, other reports have not been so positive about the supposed cooperation. Some pro-Assad outlets have accused the Kurds of letting the Syrian military face the Islamic State alone. Kurdish media and activists have said that Damascus effectively handed out parts of Hasakah to the YPG because they could not mount a defense against the Islamic State’s threat.

Now Redur Khalil, the YPG spokesman, has accused the Assad regime and the National Defense Forces militia of betraying the Kurds.

Khalil told a Kurdish website that Assad’s Baath Party and the NDF had “contributed to the entry” of the Islamic State into Hasakah, allowing the militants to establish “sleeper” cells for their attacks.

The spokesman maintained that the Kurds now held about 75% of Hasakah. He said that the YPG had always been responsible for security in northern sections, but that it had to act in the south and after the regime’s “defenses collapsed completely”, making a confrontation between the Kurds and the Islamic State “inevitable”.

He asserted that Kurdish units now controlled “all the entrances and exits” of Hasakah, with the Islamic State surrounded in the sections of the city — such as the Ghweiran neighborhood in the south — where it remained.

Khalil said the Kurds, sometimes in alliance with the rebels of the Free Syrian Army, confronted the Islamic State along a 400-km (250-mile) front in northern and eastern Syria. He claimed that the Islamic State had used chlorine gas in chemical attacks on Kurdish fighters.

A pro-opposition website asserts that fighting broke out on Thursday between Kurdish militia and Assad forces near a checkpoint and an Assyrian church in Hasakah.

Both pro-opposition and pro-Assad activists report that rebels have renewed their “Southern Storm” offensive against regime-held areas of Daraa city in southern Syria.

Rebels announced the offensive in late June. They initially took some checkpoints and briefly held buildings such as the National Hospital and the State security branch; however, the advance stalled with continued fighting.

Tanks firing on the city:

Daraa, near the Jordanian border, was the location of the first protests in the Syrian uprising March 2011. It has long been split between the regime and rebels.

Rebel have exploded a vehicle bomb as they maintain their attacks on two regime enclaves north of Idlib city in northwest Syria.

One bomb, remotely controlled by the rebel faction Ahrar al-Sham, was used on a checkpoint near Fu’ah and Kafraya, which have been surrounded by rebels for months. The checkpoint was subsequently captured. Claims are circulating that the Islamist faction Jabhat al-Nusra also attacked a checkpoint with a vehicle bomb, although it is unclear if these are actually referring to Ahrar al-Sham’s operation.

The rebel coalition Jaish al-Fateh announced last week that it was launching rockets and mortars on the fortified enclaves in retaliation for the Hezbollah-regime offensive against Zabadani in Damascus Province. Rebels have also moved on the ground, raising the prospect that they may finally try to take over the villages.

Rebels are using new 200-mm mortars and “elephant rockets” in the attacks.

Jaish al-Fateh has put out a further statement explaining the rationale for the attacks. The coalition said the assault was a response to the “systematic genocide” committed by the Assad regime while “the international community turns a blind eye”. It said there are about 4,000 Syrian troops and militia in the enclaves with heavy weapons “used to target civilians in nearby towns”, and it claimed that the rebels’ policy “towards the protection of civilians from all sides is very clear”.

An airbase in southern Turkey is expected to be opened to aircraft of the US-led coalition against the Islamic State, following a phone call between the Turkish and US Presidents.

The two sides agreed in principle about the use of the İncirlik base in Adana during talks on July 7-8. The deal was confirmed in a discussion between President Obama and Turkish counterpart Recep Tayyip Erdoğan on Wednesday, according a White House statement.

Before the conversation, a US State Department official said that the İncirlik base was expected to open in early August to the coalition aircraft, which began attacks against the Islamic State in Iraq and Syria last summer.

Turkey has been pressing for safe havens and a no-fly zone inside Syria as part of the agreement. Asked on Wednesday if the options were still on the table, Deputy Prime Minister Bülent Arınç said, “Turkey is doing its part in the coalition to support it. However, in order to achieve a result, it also wants the realization of a no-fly zone, security zone and other elements.”

However, speaking at the Aspen Security Conference on Thursday, President Obama’s envoy General John Allen categorically ruled out the options:

Military officials from Turkey and the U.S. agreed to deploy armed drones at the İncirlik air base in March, but waited for almost three months for political consent from Ankara.

İncirlik is about 400 km (250 miles) from Raqqa, the Islamic State’s center in Syria. The US-led coalition has been relying on bases in the Gulf, flying almost 2,000 km (1,240 miles) a day to reach their targets.

US Official: 60 US-Trained Rebels Could Call in Airstrikes — But Are Not Authorized to Do So

An American official has said that the 60 rebels trained by the US in a $500 million program to challenge the Islamic State have the equipment and the training to call in airstrikes; however, they are not authorized to do so.

“We have real time communication, the ability to track friendly locations, everything,” said the official.

The train-and-equip program was authorized by Washington last autumn but has been beset by bureaucratic and logistic problems and disputes over the missions, with Syria’s rebels setting the priority of removing the Assad regime. Earlier this month, US Defense Secretary Ashton Carter said 60 fighters were now ready to go into the field, and subsequent reports said they had entered northern Syria.

The official said rebels — vetted for reliability — could radio coordinates and the enemy’s location to teams in the region set up to coordinate with U.S. and coalition aircraft. The targeting information would be corroborated through additional “backdrops” — a reference to other intelligence assets — before a strike could be approved.

The official confirmed that Kurdish fighters have used similar methods while fighting in the town of Kobane against the Islamic State.

A pro-Assad website claims that the regime has sentenced five leading opponents of the regime to death in absentia.

All five men are based outside the country. Habash is a moderate Islamic scholar who was in the People’s Assembly before defecting. Arour is a cleric from Hama who is now a popular TV figure in Saudi Arabia. Qassem is an influential Al Jazeera host from Suweida. Kilo is an intellectual and human rights activist who hails from Latakia. Qaradawi, an Egyptian, is a Muslim Brotherhood-affiliated intellectual who hosts the Sharia and Life program on Al Jazeera.

The verdict was not published by State media, but Syria Steps said that it had “obtained copies of a number of verdicts issued by the Court for Cases of Terrorism that order the execution of people who have incited, and taken part in, the letting of Syrian blood”.

Islamic State fighters killed one Turkish soldier and wounded two in a cross-border attack on Thursday.

The military wing of Turkey’s Kurdistan Workers’ Party (PKK) has claimed responsibility for a Wednesday attack killing two police officers, as another police officer died from gunfire on Thursday.

The PKK says Wednesday’s shootings were retaliation for Monday’s suicide bombing by the Islamic State that killed 32 young activists and wounded more than 100 in Suruc in southeastern Turkey, across the border from the Syrian Kurdish center of Kobane.

The PKK said the police officers were killed for their links to the Islamic State.

On Thursday, masked assailants shot at two traffic policemen in the city of Diyarbakır. Both were wounded seriously and one of them died later in hospital.