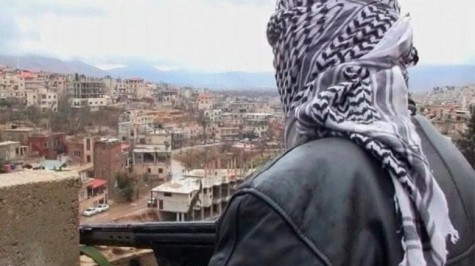 Within days of the initial attacks, pro-Assad outlets were proclaiming that victory was near, with the Hezbollah-regime advance only 200 meters from the center of the town. They have repeated the same declaration on numerous occasions since then: on Friday, al-Masdar News assured that it was “Zero Hour” for conquest, and this morning it proclaims that a Hezbollah ambush killed more than 40 rebels on a Zabadani street.

Rebels maintain that they are holding out against the assault, despite being surrounded on all sides, and that they have even broken out of the town to counter-attack regime and Hezbollah checkpoints, inflicting significant casualties.

The Syrian air force continue to bombard Zabadani, using hundreds of barrel bombs and missiles in the past three weeks.

See also Syria Daily, July 10: Rebels in Zabadani — “We Will Not Kneel to the Regime”

About 30 km (19 miles) from Damascus, Zabadani was the first town captured by the Free Syrian Army in the rebellion against President Assad, falling to the rebels in January 2012.

At least four children and two elderly people were reportedly among those killed.

Dangerous – Suspected #IS attacks on pro-revolution Islamists in #Idlib continuing; at least 6 attacks in 2 weeks: pic.twitter.com/briFowJKhN

In the deadliest attack, Islamic State suicide bombers killed more than 30 people — including Jabhat al-Nusra fighters — in a mosque in Ariha, south of Idlib, on July 3.

Sources also confirm Lister’s assertion that the Islamic State cells are operating within Jund al-Aqsa, an Islamist group who split from Jabhat al-Nusra and whose ideology — despite its battlefield alliance with rebels — is close to that of the Islamic State.

Photo of Day: A Ferris Wheel for Eid in Devastated Aleppo

Amid the rubble in Aleppo, Syria’s largest city, children ride on a makeshift ferris wheel during the Eid celebrations at the end of the holy month of Ramadan: 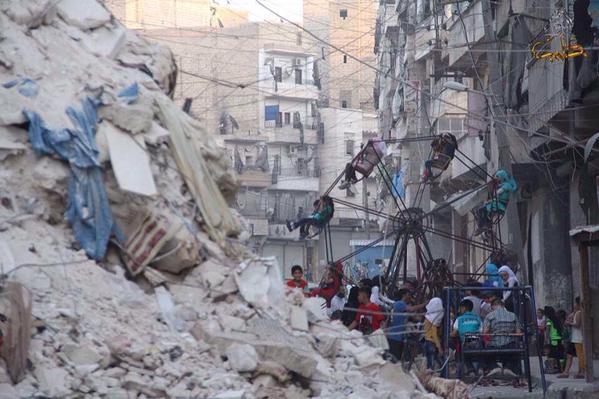 Aleppo has been divided since rebels took over parts of the city in July 2012.

Reports are circulating that the Kurdish militia YPG have taken on much of the fighting against the Islamic State in Hasakah city in northeast Syria. They say the Kurds have encircled Islamic State fighters who are still inside the city after the latest offensive that began in late June.

#Hasakah City Map. #YPG offensive has encircled and trapped #ISIS around the perimeter of the city core. Closeup crop pic.twitter.com/u7v3v2boYG

Some reports assert that the Syrian military has handed over entire sections of Hasakah to the Kurdish force, effectively grantly the Kurds long-term control. Pro-Assad outlets maintain that the counter-attack against the Islamic State is a coordinated response, with the Syrian army closing from the north and east and the YPG from the west and south.

Near the Iraqi and Turkish borders, Hasakah is a predominantly Kurdish city with a mixed population of Kurds and Arabs, as well as a significant minority of Assyrians and a smaller number of Armenians. The Islamic State has threatened the city since an advance through northeastern Syria in summer 2014.