Iran Analysis: France Wants to Do Business With Tehran 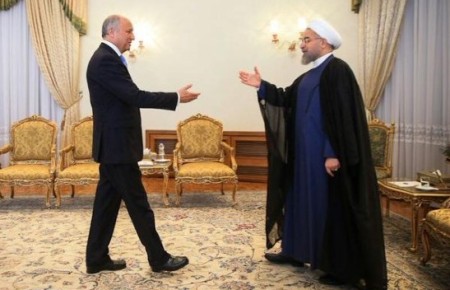 Foreign Minister Laurent Fabius, the first top French diplomat to visit Tehran in more than a decade, sought to repair frayed political and economic ties as Iran uses this month’s nuclear deal to rebuild after years of sanctions.

“We should make up for lost time to expand cooperation,” Fabius told Rouhani, according to a report of their meeting carried by the state-run Iranian Students News Agency in Farsi. “In the coming days, we will witness a stronger presence from large French companies when it comes to Iran investments,” the report cited Fabius as saying.

Iran reached an agreement this month with six global powers, including France, to curb the Islamic Republic’s nuclear program in return for the lifting of economic sanctions. France had traditionally maintained cordial ties with Iran, and its companies are well placed to benefit from warmer relations.

“It’s quite clear that it’s not only a politically important trip, but also an economically important one,” said Scott Lucas, an Iran analyst and professor of international relations at Birmingham University in the U.K. “Beyond oil and gas, France was extensively involved in Iran’s manufacturing sector” until sanctions became tighter, he said.

France is “trying to build on that position of strength,” Lucas said.

A delegation of French companies is set to visit Iran in September, Fabius said at a joint press conference with his counterpart Zarif in Tehran.

In Paris, PSA Peugeot Citroen Chief Executive Carlos Tavares said Wednesday the company had reached an agreement with a local partner to sell its DS models in Iran. Both Peugeot and Renault SA were key companies in Iran’s automotive industry before sanctions took hold.

Closer business ties will probably happen faster than the “relations based on trust” referred to by Mogherini, Lucas at Birmingham University said.

“We’re going to see a loosening of isolation, particularly on the economic front,” he said. “It’s going to take much longer to get the type of political cooperation that Mogherini was talking about.”

If Rouhani goes to France, it would be the first official visit by an Iranian president since Mohammad Khatami in 2005.
“In our relations with France we want to look into the future,” ISNA cited Rouhani as saying. The nuclear agreement “can be a foundation for various bilateral agreements and also for cooperation between Iran and the EU.”

Iranian authorities boosted security as Fabius arrived, with plain-clothed agents and riot policemen deployed around the French embassy in downtown Tehran. His visit was opposed by some Iranian hardliners due to France’s perceived tough stance in the nuclear negotiations.

France’s position allowed for a “strong” agreement, Fabius said in the press conference.