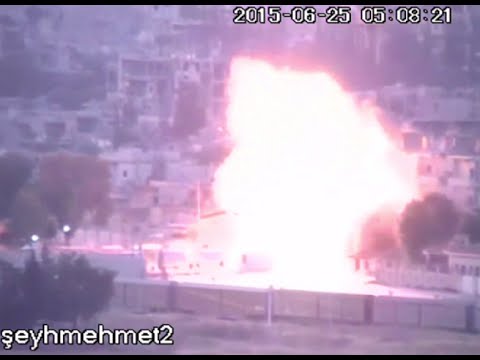 Kurdish activists report that more than 140 people were killed in Thursday’s assault by the Islamic State in and near the Kurdish center of Kobane, in northern Syria close to the Turkish border.

The violence is continuing today, with Islamic State fighters holding 50 hostages as they try to evade being captured or killed by Kurdish forces.

The Kurdish outlet Rudaw says the death toll is 142, with 183 injured, when the Islamic State launched its sudden attack on Kobane with a suicide bombing and gunfire. More than 30 people were reportedly executed in the village of Bakha Botan, 20 km (12 miles) from Kobane.

Mishta Nur Hospital, in the south of Kobani, and a several buildings and a mosque in the north are still held by the Islamic State, according to a local official.

The Free Syrian Army’s Raqqa Brigade said its leader Abu_Issa was targeted by the Islamic State inside his house in #Kobane. The Brigade said he was unarmed, but his wife and others were injured.

The explosion of the suicide bomb on Thursday: