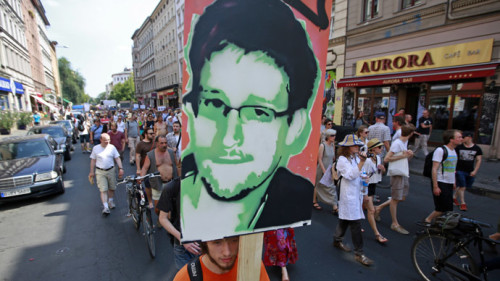 PHOTO: A marcher with a placard of former US National Security Agency employee Edward Snowden

Technical issues delayed the posting of Episode 2 of “Political WorldView”, the podcast from the University of Birmingham with my colleagues Adam Quinn and Christalla Yakinthou. However, a lot of the discussion should still provoke debate and ideas, given the topics:

1. What does the continuing agitation and spin over the case of Edward Snowden and the recent passage of the “Freedom Act” in the US say about the state of surveillance — in the US, Britain, and beyond — of our communications and daily lives?

2. What did Turkey’s elections this month, beyond the setback for President Recep Tayyip Erdoğan and the ruling AKP, say about the possibility of political space — from the expansion of rights to the “Kurdish issue” — in Turkey?

3. And the introduction of our “Number of the Week” feature….