Syria Daily, June 15: Are Kurds and Rebels About to Defeat Islamic State in Tel Abyad? 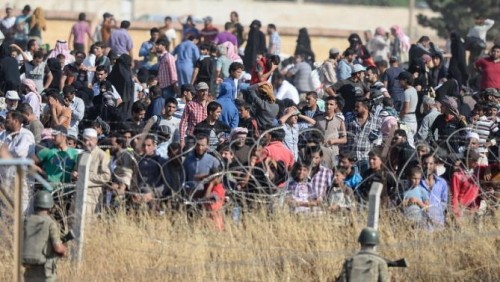 UPDATE 1930 GMT: Kurdish fighters and allied rebels have taken parts of Tel Abyad from the Islamic State, after surrounding the town near the Turkish border.

A spokesman for the Kurdish YPG militia, Redur Khalil, said the group entered Tal Abyad from the east and was advancing toward the west amid fierce clashes with pockets of Islamic State resistance.

“We expect to have full control over Tal Abyad within a few hours,” he said.

Khalil suggested that some Islamic State fighters have now fled toward Turkey, after earlier saying that he believed hundred to still be in Tel Abyad.

Tel Abyad Mayor İbrahim Bellud said the militants ransacked the town, stripping a hospital of all its equipment and moving it to the Islamic State’s center of Raqqa, along with 40,000 sacks of wheat.

Mohammad Kefr Zeyta, the commander of the Free Syrian Army’s Liwa Tahrir, said there were a few militants left in Tel Abyad, hiding in houses. He said more time is needed to take full control of the town because militants have planted mines in and around the urban area.

The Kurdish-rebel force has also seized the nearby border crossing from the Islamic State.

ORIGINAL ENTRY: Kurdish and allied rebel forces, moving rapidly across northern Syria near the Turkish border, are on the outskirts of the Islamic State-controlled town of Tel Abyad.

An offensive which began last month, hoping to cover a 90-km (56-mile) gap between the Kurdish Kobane and Cezire cantons has gained pace in recent days. The Kurdish YPG militia announced the capture of dozens of villages and farms on Sunday. Some reports said they had moved into Tel Abyad from the southeast.

Kurdish outlets also said the offensive was close to cutting the Islamic State’s supply route to Raqqa city, their central position in Syria.

Tal Abyad is close to an Islamic State-controlled border crossing of the same name which has been important for the movement of men and supplies.

Kurdish forces at the al-Jalab bridge:

While the Kurdish-rebel force was moving on Tal Abyad, thousands of fleeing civilians were trying to get across the border into Turkey. Turkish authorities said they had lifted a ban on movement, imposed Saturday, but blamed the Islamic State for continuing to block displaced Syrians from crossing.

Al Jazeera later reported that Islamic State fighters were determining if there were any “wanted” civilians among those exiting the country; however, Turkey managed to devise and implement a “more organised and effective way” for entry.

Turkey had allowed about 13,000 civilians to enter in the 10 days up to Saturday; however, Turkish forces were photographed using water cannon and warning shots to prevent any further influx.

State Media: 23 Killed and 100+ Wounded by Rebel Rockets in Aleppo

Syrian State news agency SANA says 23 people have been killed and more than 100 injured by rebel rockets on regime-held areas of Aleppo city.

An unnamed source said the rockets came from the Bani Zeid neighborhood.

Claiming that most of the casualties are children, SANA posts a series of photographs with the story: 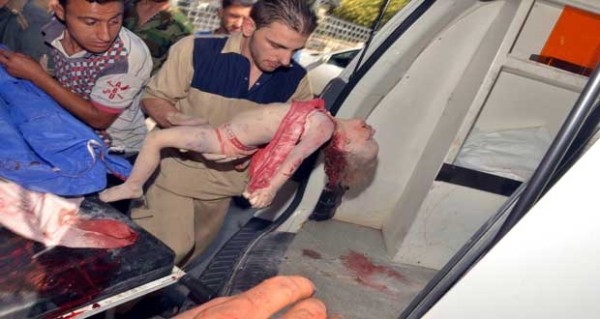 The factions claim the PYD and YPG have moved out Sunni and Turkmen communities in western Hasakah Province and near Tel Abyad, as the offensive pushed back the Islamic State. The statement says the removal of population is part of a “terrorist scheme” by the Turkish Kurdish movement PKK, and demands that PYD and YPG also be designated as “terrorist” by the international community.

At the same time, the factions appeal to Syria’s Kurds by insisting that they are “an integral part of revolution and society”.

The PYD and YPG have denied allegations that the homes of Arab residents were burned as the Kurdish militia reclaimed territory from the Islamic State this spring.

The rebel coalition attacked a series of regime checkpoints in northern Hama over the weekend, furthering the possibilities of an offensive moving south from Idlib Province.

Syrian forces have held back a rebel offensive seeking to remove the last significant regime positions in Idlib Province in northwest Syria.

The Jaish al-Fatah rebel coalition launched attacks on Sunday, seeking to move on Frikka, the last major town held by Assad troops. However, they faced resistance at the Sheikh Khattab mountain and near the Zayzoun Dam.

Rebels hold more than 95% of the province, having claimed the provincial capital Idlib and other cities and towns this spring.