Iran’s lead nuclear negotiator has indicated that Tehran is prepared an extension to a June 30 deadline for a comprehensive agreement.

Speaking on Tuesday, Deputy Foreign Minister Abbas Araqchi (pictured) said no deadline would prevent Iran from reaching a “good and favorable” deal with the 5+1 Powers (US, Britain, France, Germany, China, and Russia): “A specific date is not sacred to us.”

Political deputies of Iran and the 5+1 renew discussions in Vienna today on the final draft of the agreement.

Araqchi said that “relatively good but slow progress” was made during the latest round of talks from last Wednesday to Sunday. Technical teams have remained in Vienna for talks over the last 72 hours.

In a notable shift, Araqchi indicated that Iran will not expect sanctions to be lifted immediately on signature of the comprehensive agreement. He said that, due to “some technical and legal procedures”, the restrictions will be removed “on the possible agreement’s implementation date”.

The US said after the announcement of a nuclear framework on April 2 that UN, European Union, and US sanctions would be removed or suspended as soon as the International Atomic Energy Agency verified Iranian compliance with the terms of the final agreement.

Iranian Foreign Minister Mohammad Javad Zarif initially accepted that interpretation, but Iranian officials — including the Supreme Leader — insisted that the removal of sanctions must occur immediately.

A well-known Kurdish political prisoner has been executed, without any notice to his family.

Mansour Arvand was sentenced in 2011 for the capital crime of “moharebeh”, enmity towards God. He was also accused of collaboration with the Kurdistan Democratic Party of Iran.

Last month, Arvand was transferred from another Prison without explanation, according to opposition reports. On Monday, Arvand’s family was called into the prison and informed that their son was hanged the previous day.

Resuming the political fight after the recent 10-year prison sentence on his son, former President Hashemi Rafsanjani has challenged hardliners over sanctions and the nuclear talks with the 5+1 Powers.

The hardliners, including Friday Prayer Leaders in Mashhad and Tehran, have claimed the Rouhani Government is exaggerating the effect of US-led sanctions and thus showing weakness in the pursuit of a nuclear agreement.

Rafsanjani used the launch of his book, a history of Iran, to declare that the sanctions have been “tough” and that an agreement will help the Islamic Republic in its recovery from the economic problems and mismanagement of President Rouhani’s predecessor, Mahmoud Ahmadinejad.

Mohsen Mirdamadi, Secretary General of the reformist Islamic Iran Participation Front, has been released after 6 years in prison.

Mirdamadi, who was an MP from 2002 to 2004, was detained within days of the disputed 2009 Presidential election and held in solitary confinement for 110 days.

Mirdamadi (right) with his wife after his release: 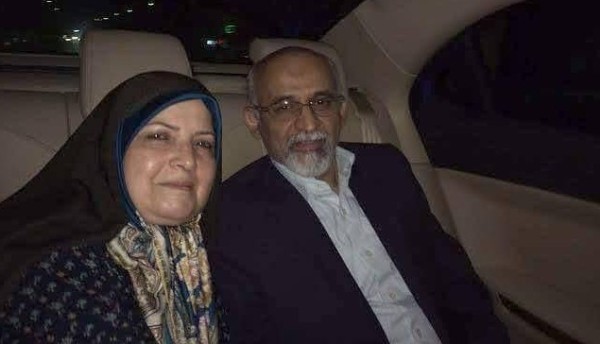 Funeral for Iranian General Killed in Southern Syria in April

Kajbaf was killed on April 19 as rebels captured Busra al-Harir in Daraa Province in southern Syria. He was reportedly one of the first Iranian commanders to fight in Syria, with operations in Daraa, Quneitra, and Damascus Provinces.

Iran lost several high-ranking officers this spring amid rebel advances and failed regime offensives in both northwest and southern Syria. Iranian fighters, as well as Afghans recruited by Iran and Iraqi militias, were also slain.