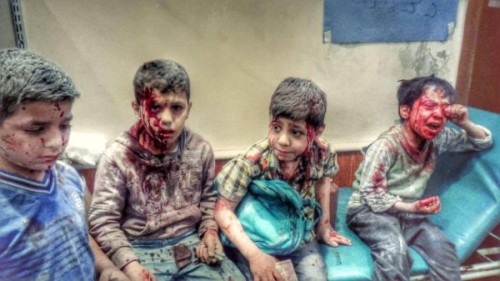 PHOTO: Boys wounded in a regime airstrike on an Aleppo school last weekend

On Tuesday, Amnesty International published a 61-page report, summarizing the toll in Syria’s largest city Aleppo from attacks between January 2014 and March 2015.

Most of the report is about regime aerial assaults, notably with barrel bombs, and shelling which killed 3,124 civilians — and only 35 rebels — in 15 months. It notes “hundreds of cases” of arbitrary detention, enforced disappearance, and torture of civilians by regime forces and officials in and near Aleppo.

While the bulk of the report is about possible war crimes by the Assad regime, Amnesty also considers civilian deaths from “imprecise” mortars and abductions and torture by “non-state armed groups” that could also be prosecuted. It cites an interview with the head of a British-based “monitoring group”, in which he claims 672 civilians were killed by rebel shelling in 2014, and details eight incidents including attacks on schools and a mosque.

“As a backdrop to these grave violations”, Amnesty details “appalling conditions” with lack of basic services and shortages in both regime- and rebel-head areas. It records the statements of agencies that they face “significant challenges to providing aid, not least of which is the government forces’ continual targeting of the road that serves as the primary access route for humanitarian assistance to the city”.

Amnesty International conducted research on violations committed by the Syrian government and non-state armed groups in Aleppo city and its closest suburbs since January 2014. For this report, researchers interviewed 78 current or former residents of Aleppo and 29 professionals working in or on Aleppo. These interviews, which were conducted either in person or by phone, email or virtual means, were carried out in Turkey in December 2014 and January 2015 and in Lebanon in February and March 2015. Amnesty International also reviewed extensive photo and video materials and crosschecked them with witness accounts. In March 2015, Amnesty International contacted the Syrian authorities to share its preliminary findings, request a response to these findings and seek clarifications and additional details on incidents examines in this report, but had received no response as of 23 April 2015.

Based on this research, our conclusions are clear and incontrovertible: civilians in Aleppo are suffering unthinkable atrocities. Our assessment is that the violations committed by the Syrian government and many armed opposition groups in Aleppo not only violate UN Security Council Resolution 2139, which was unanimously adopted more than one year ago, but are also war crimes. In some cases, the actions of the Syrian government amounted to crimes against humanity.

Civilians in opposition-controlled areas of Aleppo have been bombarded in their homes, hospitals, schools, public markets and places of worship in air attacks launched by government forces. The majority of attacks in this campaign have involved the use of “barrel bombs” — large, improvised explosive devices, which are delivered from helicopters and consist of oil barrels, fuel tanks or gas cylinders that have been packed with explosives, fuel and metal fragments to increase their lethal effect.

From January 2014 to March 2015, government forces launched continual attacks using barrel bombs and other imprecise explosive weapons on areas populated with civilians, including at least 14 public markets, 12 transportation hubs and 23 mosques, and on civilian objects, including at least 17 hospitals and medical centres and three schools.

Meanwhile, the Syrian government has failed to acknowledge that its aerial bombardment campaign in Aleppo has resulted in a single civilian casualty and has insisted that air attacks have targeted only “terrorists”.

These and other factors examined in this report suggest that the aerial bombardment campaign conducted by government forces in Aleppo city deliberately targeted civilians and civilian objects. It is a war crime to intentionally make civilian objects and civilians who are not directly participating in hostilities the target of attacks. Such a systematic attack on the civilian population, when carried out as part of government policy as appears to have been the case in Aleppo, would also constitute a crime against humanity.

Amnesty International and other monitoring groups have also documented attacks by armed opposition groups on residential neighbourhoods in government-held areas of Aleppo. These attacks often involved the use of imprecise explosive weapons such as mortars, which should never be used in the vicinity of concentrations of civilians. Given the nature of the weapons used, many of these attacks are likely to constitute indiscriminate attacks which, when they kill or injure civilians, are war crimes. Some of these attacks may have also constituted deliberate attacks on civilians or civilian objects, which are also war crimes.

Amnesty International and other monitoring groups have documented hundreds of cases since January 2014 involving the arbitrary detention and enforced disappearance, as well as the torture and other ill-treatment, of civilians by the Syrian government in Aleppo city and its closest suburbs. These violations have taken place within the context of thousands of similar cases that have been documented across Syria since 2011. In so far as torture and enforced disappearances in Aleppo appear to have been perpetrated as part of a systematic and widespread attack on the civilian population by the Syrian government, these violations may amount to crimes against humanity.

Amnesty International has also concluded, based on cases examined in this report and prior work, that many non-state armed groups have engaged in abductions and hostage-taking, as well as the arbitrary detention, torture, and other mistreatment of prisoners in Aleppo. Such acts would constitute war crimes.

As a backdrop to these grave violations, residents of Aleppo city live in appalling conditions. Residents in both opposition-held and government-held areas lack basic services such as water and electricity, and suffer shortages in food, medicine and gas to heat their homes. Humanitarian workers told Amnesty International that they are generally able to reach areas controlled by residents in all areas of the city. Yet those providing assistance to opposition-controlled areas discussed significant challenges to providing aid, not least of which is the government forces’ continual targeting of the road that serves as the primary access route for humanitarian assistance to the city.

The rate of air attacks by government forces on opposition-held areas in Aleppo city appeared to decrease between September 2014 and March 2015, but has recently risen again drastically; they continue to occur on a daily basis. Furthermore, civilians are being arbitrarily detained, tortured and disappeared, and the threat of a siege is ever present.

Amnesty International therefore calls on all parties to the Syrian conflict to end deliberate attacks on civilians and civilian objects such as hospitals and schools; to end the indiscriminate use of explosive weapons such as barrel bombs and mortars in populated areas; to end arbitrary arrests, enforced disappearances, abduction and torture and other illtreatment; and to allow unimpeded humanitarian access to the UN and its implementing partners in Aleppo and in Syria as a whole. Ultimately, the success of initiatives like the Special Envoy’s “freeze” should be measured by the commitment of all warring parties to halt the human rights abuses, war crimes and crimes against humanity that are being committed in Aleppo and across Syria.