Iran Daily, May 6: Supreme Leader to US “How Dare You Threaten Us Militarily?” 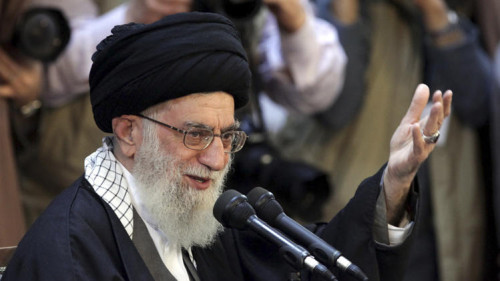 Speaking to teachers on Wednesday, the Supreme Leader stepped up his rhetoric against the US, with Iran’s nuclear talks with the 5+1 Powers at a critical stage:

How dare US officials threaten #Iran militarily? In 2007 I said that hit-and-run attacks are no longer possible; you will get involved.

Ayatollah Khamenei asserted, “Recently two US officials threatened to take military action against Iran,” and connected the claim to the nuclear discussions, which are drafting the final text of a comprehensive agreement to be reached by a June 30 deadline: “What does negotiation mean under ghost of a threat?”

US need for the #talks–if not more- is not less than #Iran's. Negotiators should observe red lines& tolerate no burden, humiliation &threat.

The Supreme Leader did not name the US officials, but Defense Secretary Ashton Carter said in a Congressional hearing last month, “We have the capability to shut down, set back and destroy the Iranian nuclear program and I believe the Iranians know that and understand that.”

Carter referred to the US military’s most powerful ground-penetrating “bunker-buster” bomb, the Massive Ordinance Penetrator.

Iran’s drafting of the nuclear text with the European Union’s Helga Schmid adjourned on Tuesday in New York after six days. Discussions between Tehran and the 5+1 Powers (US, Britain, France, Germany, China, and Russia) resume on May 12 in Vienna.

Claiming that other nations admire Iranian “resistance”, the Supreme Leader also denounced the US over the crisis in Yemen:

US has been disgraced. Supporting those who attack #women & #children in Yemen& destroy #Yemen’s infrastructure ruin US image in the region.

In an intervention on social media on Tuesday, the Supreme Leader’s office invoked Northern Irish hunger striker Bobby Sands, who died in 1981, to criticize Britain and “global domineering empires”.

A member of the Irish Republican Army, Sands passed away after 66 days without food, in a protest over prison conditions with the demand to be labelled a prisoner of war.

Ayatollah Khamenei’s office marked the 34th anniversary of Sands’ death with a series of tweets:

We perceived the message of #BobbySands’ silent lips &strongly believe in it.It heralds the fall of superpowers &global domineering empires.

I address all sisters &brothers in the world who've stood up against oppression &comrades of #BobbySands that #victory is for the oppressed.

#Iran &Muslims endorse all those who struggle against arrogants. We feel #BobbySands’ sufferings, since we've gone through the same.5/8/1981

Amid Iran’s nuclear talks with Britain, the US, and other powers and conflicts in the Middle East, Khamenei’s offered no specific political reason for the Twitter blast. Instead, it appeared to be part of an annual ritual, repeating the message from 2014:

The Iranian regime has regularly denounced Britain as an ally of Tehran’s American foe. However, the Islamic Republic has also been in talks with London to reopen Embassies in each other’s countries.

The British Embassy in Tehran was shut after the complex was overrun by a crowd in November 2011. Britain responded by ordering the closure of the Iranian Embassy and the departure of all diplomats.

Iranian Navy: We Shooed Away US Warship and Planes from Gulf of Aden

In the latest shadow-boxing over naval presence in the Persian Gulf and along the coast of the Arabian Peninsula, Iran’s military is declaring that it forced a US warship and military planes to retreat in the Gulf of Aden.

Fars News, linked to the Revolutionary Guards, says the US destroyer and two reconnasissance planes changed its direction after it came close to Iranian ships and was warned to move away.

“Checking foreign warships in the international waters and surveilling potential threats to Iran’s national interests is our essential responsibility,” the commander of the Iranian flotilla, Commodore Mostafa Tajeddini, said.

The US said last month that it was positioning warships in the area to prevent Iran from supplying weapons to Yemen’s Ansar Allah (Houthi) movement, which is facing a Saudi-led aerial intervention as it challenges other Yemeni factions.

Tehran has insisted that its ships did not withdraw, saying that they are conducting “anit-piracy patrols” in the Gulf and the Bab al-Mandab Strait.

Meanwhile, the commander of the Iranian navy said that a US-owned ship and its 34-member crew, forced by patrol boats into the southern Iran port of Bandar Abbas last week, will be freed after its owner pays debts to Iran’s Ports and Maritime Organization.

Rear Admiral Habibollah Sayyari said, “According to the court ruling issued in the case involving this ship, it will be released after paying the compensation money to the Islamic Republic of Iran.”

Iranian officials say that the Maersk Line Shipping Company, based in Denmark, owes more than $10 million to an Iranian oil products company for undelivered containers.