Syria Daily, May 23: Assad Regime Tries To Turn Another Defeat Into “Victory” 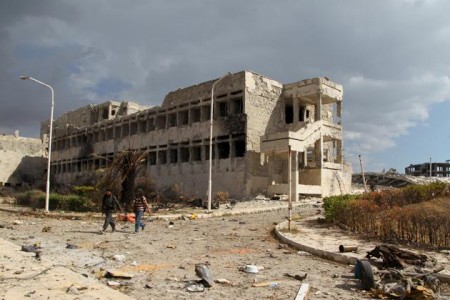 PHOTO: National Hospital in Jisr al-Shughour in northwest Syria, after the flight of more than 200 regime troops

Analysis: “The Absence of the Obama Administration in Protecting Civilians”

UPDATE 1845 GMT: State media is featuring the statement of Colonel Mahmoud Sabha, the “commander of a group of Syrian Arab Army soldiers” who fled the National Hospital in Jisr al-Shughour on Friday.

Sabha implicitly supported the claim of rebels that their psychological warfare pushed more than 200 Syrian troops to make a break for regime lines 2.5 km (1.5 miles) away:

When the terrorists failed to break into the hospital, the Colonel said, they intended to dig tunnels beneath it so as to blow it up completely….

That was when we had to try to leave the hospital in fear for the lives of the heroes who stood firm for about a month.

Rebels said on Friday that they had circulated video of a tunnel being dug under the hospital and a Twitter message that their leading engineer in tunnel construction was in Jisr al-Shughour, hoping to force out the Syrian troops.

Sabha said, “We fought ferocious battles over 14 hours” in the effort to flee the rebels trying to capture or kill them. He did not refer to the number of casualties suffered, or of those who made it out of Jisr al-Shughour. 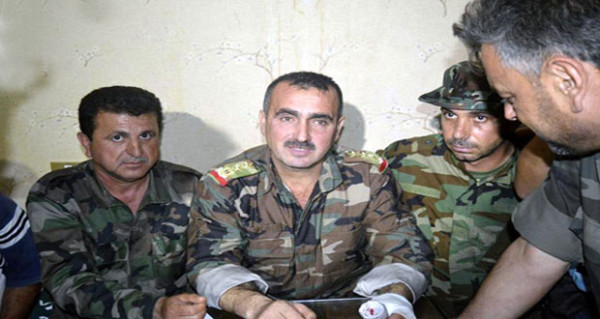 SANA also features a declaration from a soldier who supposedly escaped, “Our departure from the hospital is a beginning for another stage with our comrades in arms.”

A photo album claiming images of about 15 surviving soldiers has been posted. 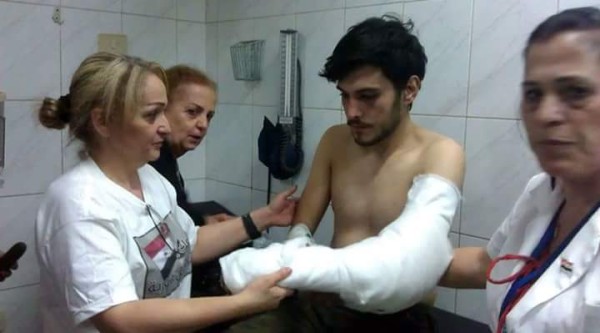 Rebels are countering with videos showing scores of slain Syrian troops, purportedly those who tried to escape.

INITIAL POST: Having lost the city of Palmyra to the Islamic State and a key military camp near Idlib to rebels this week, the Assad regime tried on Friday to turn yet another high-profile defeat into a “victory”.

After a month-long siege, more than 200 Syrian troops tried to flee the National Hospital in Jisr al-Shughour, the city in Idlib Province near the Turkish border captured by rebels on April 26. Syrian State media claimed the flight was a masterfully-planned escape, supported by air and artillery operations; however, rebel outlets said Assad’s soldiers had been “encouraged” to run by propaganda that a tunnel bomb was soon to be detonated.

Opposition fighters moved into the building, while other units hunted down the fleeing troops before they could reach regime lines about 2.5 km (1.5 miles) away. The rebels soon claimed the capture of at least 65 soldiers, with the killing or wounding of many others, and posted video of the dead. Pro-Assad outlets confirmed the deaths of three Generals and a Colonel.

However — as President Assad had staked his reputation two weeks ago on the rescue of the soldiers — the regime moved to claim a great victory. State media said the President had spoken by telephone with Colonel Mahmoud Sabha, the “commander” of the troops, telling him, “You held your ground and stood fast because you know neither defeat nor surrender.” A statement detailed a highly-classified special forces operation: “The men arrived to a Syrian army field hospital and the mission was a success.”

Regime outlets put out the story that between 65 and 80 soldiers had made it to safety, although only 14 names were posted.

Even the victory claims raised further doubts. The identification of Sabha as the commander indicated that all Generals — the number is still unknown — who were in the hospital had failed to escape. None of the 14 posted names had a rank, and another pro-Assad activist indicated that most of those who had escaped the rebels were “scouts” for the operations.

Rebels firing at Syrian troops as they fled: 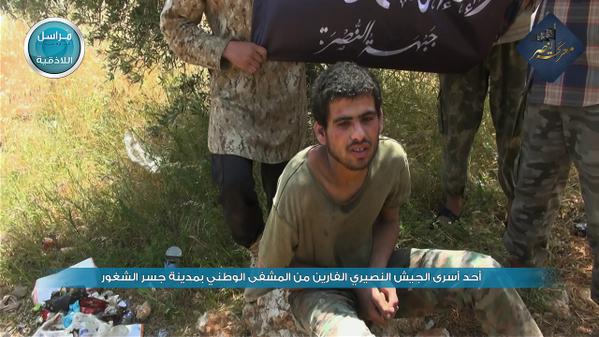 Meanwhile, the end of the siege completes the rebel takeover of Jisr al-Shughour, which lies on the highway between Aleppo and Latakia on the Mediterranean. Combined with the opposition’s victory in Idlib city in late March and the capture of the Mastoumeh and Qarmeed military camps, more than 95% of Idlib Province is held by the rebels. The prospect is now of rebel advances into Hama and Aleppo Provinces, pressing Assad in the regime-controlled city of Hama and the divided city of Aleppo.