Iran Daily, May 8: Unrest in Northwestern City After Death of Woman “Fleeing Rape by Security Officer” 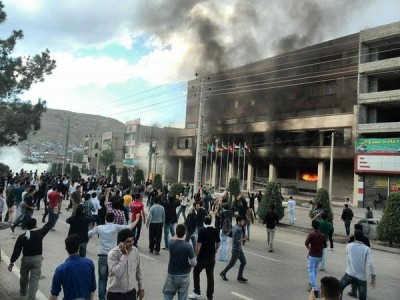 Unrest has broken out in Mahabad in Iranian Azerbaijan in northwest Iran, following the death of a woman who was reportedly fleeing an attempted rape by a security officer.

Demonstrators set a downtown hotel on fire on Thursday afternoon after a maid, Farinaz Khosrawani, was fatally injured when she jumped to avoid the attack. Witnesses said the police used tear gas to disperse crowds, injuring 18 people.

Thousands of residents turned out on the streets following a call by women’s rights activists to protest.

Kurdish media claimed the hotel’s owner had assisted the alleged attacker, promising to make his stay “as pleasant as possible” if the official gave the accommodation a favorable report.

The Mayor of Mahabad, Jafar Katani, confirmed that a man had tried to rape the maid. However, he said that the assailant, who had been arrested, was not a State official but an inspector instructed to raise the standard of the hotel.

Katani called for calm: “People have to wait for the test results, only then will we know the reason for Khosravani;s death.” 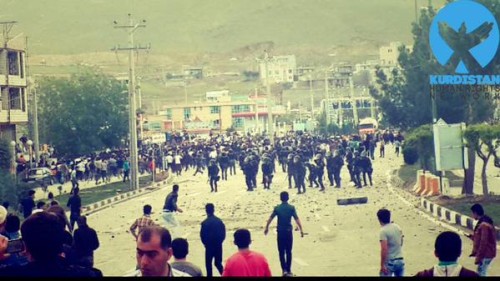 Mahabad has a recent history of unrest. A decade ago, thousands demonstrated after a Kurdish youth was shot dead by security forces, and several people were killed in the following weeks.

In Mahabad, a city in the Iranian province of West Azerbaijan, it had recently been major protests a decade ago. At that time, security forces shot dead a Kurdish youth, as a result of thousands of Kurds went to the regime on the street. In weeks of riots several people were killed. In 2010, 12 civilians were killed and at least 35 wounded by the bombing of a military parade.

Friday Prayer Leaders Warn Iranian Nuclear Negotiators: Do Not Be Intimidated by US

Following the Supreme Leader’s lead from Wednesday, today’s Prayer Leaders have warned Iran’s nuclear negotiators to be firm with the US in the discussions seeking a comprehensive agreement by June 30.

In Tehran, Ayatollah Ahmad Khatami said the negotiators should not accept talks under America’s “ghost threat”, the Supreme Leader’s phrase for the recent statement of US officials that all military options are “on the table”.

Like the Supreme Leader, Khatami did not withdraw support for the discussions, which resume in Vienna on Tuesday, but said the Islamic Republic will not negotiate if the US and its allies try to intimidate Tehran or force it into concessions.

He continued, “If you would like to once again try your luck, the Iranian nation will teach you quite a lesson to cause you never-ending regret.”

In Mashhad, Ayatollah Alamalhoda echoed, “We have to understand our enemy.”

Head of Revolutionary Guards: West’s Military Option “No More Than A Mockery”

During a pause in Iran’s nuclear talks with the 5+1 Powers, the head of the Revolutionary Guard has taken another swipe at the US and its allies by belittling their military strength.

General Mohammad Ali Jafari said on Thursday, “The military option which the Westerners are constantly talking about is no more than a mockery, and they do know that if the military option against the Islamic Republic of Iran could yield results, they would use it time and again.”

US officials, including Defense Secretary Ashton Carter, have recently repeated the Obama Administration’s line that military options are “on the table” if diplomacy with Iran breaks down.

On Wednesday, the Supreme Leader said the statements were a threat to nuclear talks, which adjourned in New York on Tuesday and resume drafting of a comprehensive agreement in Vienna next Tuesday.

See Iran Daily, May 6: Supreme Leader to US “How Dare You Threaten Us Militarily?”

Jafari said the futility of their militaries had led Western powers to pursue “soft war” to destabilize Iran. However, this would fail not only inside the Islamic Republic but also in the region, as “the Iranian revolution has set a role model for other people in the world to follow”.