Britain Special: Conservatives (and the SNP) Win An Election — But Now The Real Battles Begin 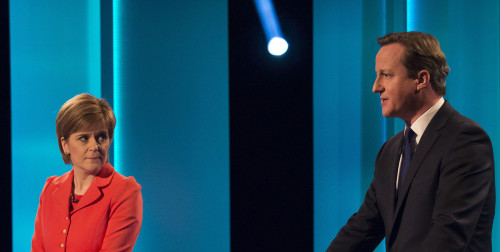 Written in partnership with the University of Birmingham as a Birmingham Perspective:

Britain’s 2015 General Election is likely to be historic — but not for the reason that most British and international media will cite this morning.

Their headline is likely to be that the Conservative Party of Prime Minister David Cameron has won an unexpected, slim Parliamentary majority after weeks of polls predicting another coalition Government, or even a minority Government with a likely second election by the end of 2015.

That’s true, but the bigger story is not of Conservative triumph — which came mainly by holding on while its traditional rivals of Labour and the Liberal Democrats — but of the rise of “insurgent” parties, especially the Scottish Nationalists. That rise, combined with tenuous Conservative majority, will bring an even greater challenge to the Tory economic and social policies, a backlash punishing immigrants and even foreigners who dare study in the United Kingdom, and probably a vote on Britain’s future in the European Union.

This election may even be the catalyst for the break-up of the United Kingdom.

HOLDING ON FOR VICTORY

David Cameron will claim today that this result is loud support for Conservative rule, following five years of a coalition with the Liberal Democrats.

He’s wrong. The Tories won primarily because they were left standing after the collapse of Labour in Scotland and the Liberal Democrats throughout the United Kingdom.

The Conservatives were able to cannibalize the Liberal Democrats, who may have fallen from 57 to 8 seats, far more effectively than Labour could accomplish. They also blocked swings to Labour in seats fought between the two parties, not only holding but winning marginals such as the constituency of the Shadow Chancellor, Ed Balls.

The reasons for those shifts will be sought long after the leaders of Labour and the Liberal Democrats, David Miliband and Nick Clegg, are pushed out the door. But after his euphoria and as he moves to defense of the thin majority, Cameron may struggle to show this as strength rather than the weakness of others.

THE BIGGEST WINNER OF THE NIGHT IS IN SCOTLAND

Any Conservative victory has been eclipsed by that of the Scottish National Party, which surged from 6 seats to claim 56 of Scotland’s 59 constituencies.

Most of Britain’s London-centred media will be looking towards a second referendum, following last autumn’s hard-fought ballot, for Scottish independence.

While that is part of the political landscape, it misses the significance of the SNP’s victory. Headed by Nicola Sturgeon, the most effective leader in the campaign, the SNP won support because of its forthright positions on education, the National Health Service, and taxation.

Put bluntly, the SNP was the only major party to put forth a “progressive” agenda, challenging austerity and spending cuts and tapping into fears about the future of Britain’s social services, as it also drew on resentment that Westminster is curbing the powers of Scotland’s devolved Parliament.

The Conservatives and Cameron face a vital decision. They either address the SNP not only over Scotland’s status but also over the direction of Britain’s economy and provision for its citizens, or they make a stand which could turn Scotland back to the prospect of independence.

HOW TO SOLVE UKIP, EUROPE, AND IMMIGRATION?

And then there’s the party that did not win seats but took a notable share of the vote: the UK Independence Party.

With only one MP — and the failure of its leader, Nigel Farage, to win his race — UKIP does not present the immediate numerical obstacle to the Conservatives which the SNP poses.

However, it will claim a political presence through numerous second-place finishes, another testament to the failure of Labour and the Liberal Democrats. It will build resentment against the Tories by saying that Britain’s “first-past-the-post” system to elect MPs, rather than one of proportional representation, is a crippling and unfair punishment.

Doing so, it will restate its demand for a referendum on Britain’s membership of the European Union, which the Conservative manifesto has promised. It will ratchet up the supposed threat of immigration to a United Kingdom.

A referendum on the EU is likely to end in favor of continued membership, given the economic suicide that departure promises; however, even staging the vote brings months of divisive politics as well as the prospect that it could end badly.

As for immigration, UKIP will not even need a vote to make its mark. The Conservatives, hoping to check the insurgency, will give way — not in a dramatic political gesture, but through mundane but significant bureaucratic measures — to restrict those who can enter Britain.

That will affect not only immigrants. It will hit groups like foreign doctors and nurses, upon whom the National Health Service increasingly relies. It will limit professionals who could bring expertise to British sectors from manufacturing to finance to academia. It will restrict overseas students, damaging Britain’s reputation as an international leader in higher education.

THE CLOSING LINE FOR BATTLE

After one Election night, we have a tenuous Conservative win. By the next Election night — perhaps in five years, probably sooner — we may not have a United Kingdom, be it inside or outside Europe.