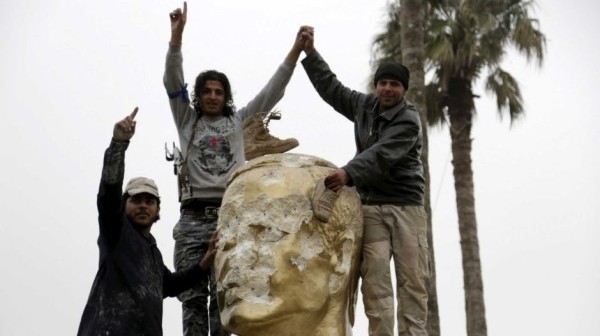 PHOTO: Rebels with a defaced statue of late President Hafez al-Assad during the capture of Idlib last month

Video and Full Translation: When Famous Colonel “The Tiger” Hassan Appealed to Damascus for Reinforcements?

After weeks of near-silence on rebel advances across Syria, including the capture of key towns and cities in the northwest and south, the Assad regime said on Tuesday that “malicious media outlets” are lying about the developments.

The Information Ministry said that “satellite channels, newspapers, magazines, and websites, along with Facebook and Twitter accounts, are carrying out a propaganda campaign timed with the clashes with terrorists taking place in the provinces of Idlib, Hasakah, and Daraa”.

The Ministry claims that “lies and rumors regarding the security, military, economic, and political situation” are being spread “to affect the morale of the Syrian civilians and soldiers alike”. It said the attempt was to show “a shift in the course of the battles between the Syrian Arab Army and terrorists, with some outlets employing fake images and exaggeration”.

In the past three months, the rebels have captured the provincial capital of Idlib in the northwest; taken territory across southern Syria, including the historic town of Busra al-Sham; repelled a major regime offensive north of Aleppo and then carried out high-profile operations, including underground bombs, in Aleppo city; checked another regime offensive south of Damascus; and held out an announced push by Hezbollah and Syrian forces near the Lebanese border.

Last week, a rebel coalition announced an offensive across southern Idlib and northern Hama Provinces. They have already taken the key town of Jisr al-Shughour near the Turkish border, moved into much of the al-Ghab Plain to the south, and threatened to cut off the Syrian military between southern Idlib and Latakia on the Mediterranean coast. On Monday, the coalition finally captured one of the two last Syrian military camps south of Idlib after a month-long campaign.

State media have not acknowledged any of these defeats for the Syrian military.

A map from “Archicivilians” of the state of rebel offensive across Idlib and Hama Provinces — green areas are held by the rebels, while the red is the under-threat regime corridor between southern Idlib and Latakia in western Syria: 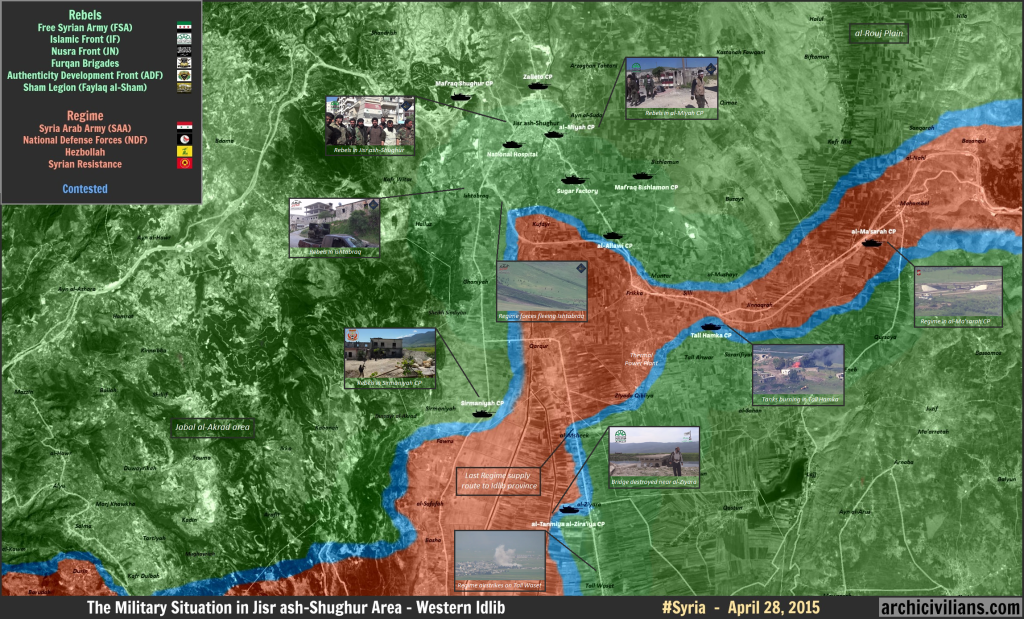 Citizen journalist Hadi al-Abdallah claims, from sources in Homs, that Syrian army units are clashing with pro-Assad militia in the city.

Abdallah claims that at least two people have been killed in the fighting.

The journalist says the militiamen have been accused of car bombings, theft of gold, and kidnappings for ransom. There are even claims of a plot to assassinate Homs Governor Talal al-Barazi.

The leading rebel faction Jaish al-Islam, based in East Ghouta near Damascus, claims that it has “graduated” 1,700 fighters in a mass ceremony: 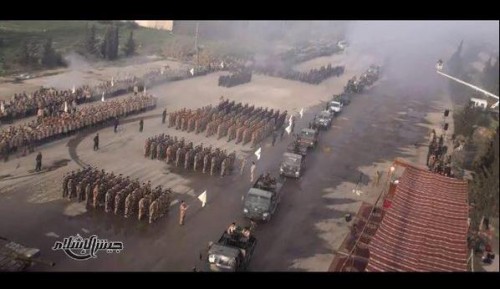 The ceremony — the largest of the 17 held so far by Jaish al-Islam — is a victory against the threats of regime forces, located a few miles away, who have long tried to break the faction’s positions in Damascus suburbs such as Douma. Meanwhile, it has been prominent in recent rebel offensives throughout Syria.

Graphic video confirms that the rebel faction Ansar al-Din executed a captured regime soldier when they took over Ishtabraq in Idlib Province this week.

The clip shows the man talking to a group of fighters, saying he is an Alawite from a unit which has been accused of abuses and killings of civilians. The fighters suddenly open fire with a volley of shots, killing the soldier immediately.

Pro-Assad outlets have been claiming a mass killing by Ansar al-Din in the village, captured on Monday. The only evidence at this point is audio, broadcast by a pro-regime radio station, claiming to be of families describing abductions and killings, and a prominent pro-Assad activist citing information from the “girl who used to babysit” him.

The Syrian Observatory for Human Rights is circulating the unconfirmed claim that Islamist factions are holding 100 people, including soldiers and their families, from Jisr al-Shughour and Ishtabraq.

Pro-rebel sources say that Syrian forces fled in panic under fire as Ishtabraq was captured. More casualties occurred in road accidents when the fleeing troops drove over each other.

Meanwhile, Syrian Civil Defense has posted an image of bodies in Jisr al-Shughour, with activists claiming they are civilians executed by Syrian forces as they withdrew from the town last weekend.