Iran Daily, April 3: After 12 Years, A Breakthrough in Nuclear Talks 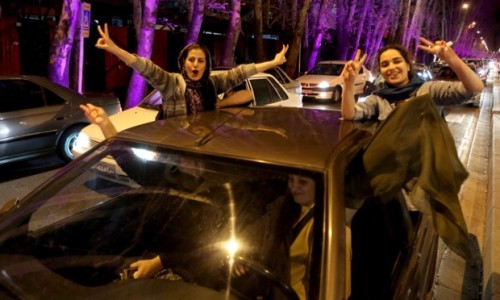 Iran Special: US Wins Big in Nuclear Framework — But Can Iran Win as Well?

UPDATE 1000 GMT: Friday prayers throughout Iran indicate the Supreme Leader’s endorsement of the nuclear framework, with congratulations extended to

Tehran Friday Prayer Leader: I congratulate Zarif on his success in Lausanne #irantalks

The cleric also put out some of the defiance that will cloak the Iranian concessions in the framework, “What Barack Obama said last night about not being able to stop Iran’s advancements is an honor for us.”

Fars News, the outlet of the Revolutionary Guards, also frames its grudging acceptance of the framework with the warning of Iranian strength, “Zarif: Iran to Reciprocate Any Possible Defiance of Final N. Deal by Powers”.

Fars also features the comment of Kayhan editor Hossein Shariatmadari deriding Zarif and the Iranian negotiators, “We gave them a fully saddled horse and in return we got the horse back with only a piece of torn tether.”

The hardline Raja News comes out in opposition to the framework, saying it is a capitulation that will shut down the Iranian nuclear program for 15 years.

UPDATE 0830 GMT: Video has been posted of Foreign Minister Mohammad Javad Zarif’s triumphant return to Iran, with people shouting in celebration as his car moves slowly through the crowd.

After more than 12 years of intermittent negotiations, Iran and the 5+1 Powers (US, Britain, France, Germany, Russia, and China) have agreed a framework for the Islamic Republic’s nuclear program.

The framework, announced on Thursday night in Switzerland, includes limits on Iran’s centrifuges, enriched uranium, and nuclear facilities; a system for inspections and supervisions; and a plan for the lifting of US-led and UN sanctions.

The two sides will now try to complete the details on implementation of the measures by a formal deadline of June 30.

Most of the key concessions in the framework appear to have come from Iran, facing economic crisis and more pressure without an agreement. The Iranians accepted a 50% reduction in their operating centrifuges for 10 years, and they will be restricted to their 40-year-old IR-1 models. They pledged dilution or shipment out of the country of almost all their uranium — not only the 20% enriched stock but also the 5% fuel. They have agreed to join the Additional Protocol of the Nuclear Non-Proliferation Treaty, bolstering an extensive system of inspections.

On sanctions, the Iranians have accepted a removal of US-led restrictions only after the International Atomic Energy Agency verifies that Iran has taken all of its key nuclear-related steps. They also retreated from demands that the removal of UN sanctions be a final, irreversible step — the framework has a provision for “snap-back” imposition of the sanctions if Iran is ever found in non-compliance with a deal.

President Obama hailed the arrangements as a “good deal” that “meets our core objectives”. Iranian Foreign Minister Mohammad Javad Zarif declared a “win-win deal” but tried to soften the concessions, particularly on sanctions, in comments retweeted by President Rouhani:

Iran/5+1 Statement: "US will cease the application of ALL nuclear-related secondary economic and financial sanctions." Is this gradual?

Iran/P5+1 Statement: "The EU will TERMINATE the implementation of ALL nuclear-related economic and financial sanctions". How about this?

Zarif maintained the position of victory through a firm line in comments to reporters:

Through resistance and steadfastness, the people of Iran conveyed that they will never bow to pressure. The people of Iran show resistance in the face of pressures. One more thing is that Iranian people proved, as stated by Leader of the Islamic Revolution (Ayatollah Seyyed Ali Khamenei), that they favor wisdom, negotiations, dialogue and constructive proposals.

Perhaps most importantly, the office of the Supreme Leader, who has to give his assent to any final deal, made no comment.

Despite the extensive limits on Iran in the framework, critics of any deal continued to snipe. Israeli Prime Minister Benjamin Netanyahu asserted, “A deal based on this framework would threaten the survival of Israel.” US Senator John McCain claimed there was no substance in the document and repeated the claim of anti-deal legislators that Congressional approval of any final agreement will be required:

Apparently there's no agreement on what's in #Iran nuclear agreement – congressional review is required now more than ever.

Skeptical US media also tried to pick holes in the unexpected range of measures in the statement, warning that “celebrations are premature” as “a handful of key issues left unresolved…could endanger the agreement’s survival“.

Saudi Arabia’s King Salman was more receptive, telling President Obama in a phone call, “The Custodian of the Two Holy Mosques expressed his hope that reaching a final binding deal would strengthen the stability and security of the region and the world.”

Meanwhile in Tehran, Iranians took to the streets to celebrate. One woman on the capital’s Vali Asr Avenue said, “Whatever the final result of the negotiations, we are winners. Now we will be able to live normally like the rest of the world.”

Another Tehrani expressed joy and relief:

This will bring hope to our life. It was as if someone had blocked my airways but I can now breathe. Everyone is happy, we’ve been waiting for this for too long.