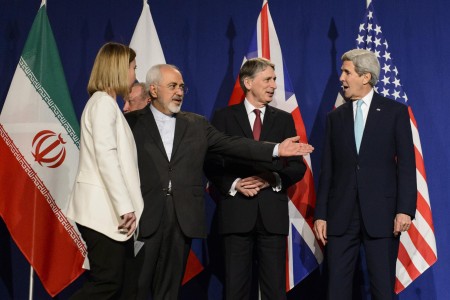 The key points of the nuclear framework announced on Thursday night by Iran and the 5+1 Powers, as claimed by the US in a “fact sheet” — we will have an analysis on Friday, “US Wins Big — But Can Iran Win as Well?”

*Iran reduces its operating centrifuges to 5,060 — about half its current stock — in the Natanz enrichment plant for 10 years.

*Iran operates only 40-year-old IR-1 first-generation centrifuges. Its IR-2 centrifuges, installed but never put on-line, will be put in storage and monitored by the International Atomic Energy Agency.

*Iran will ship almost all of its enriched uranium out of the country, reducing its current stockpile of about 10,000 kg to 300 kg of 3.67% uranium for 15 years.

*Iran’s second enrichment plant at Fordoo will be converted into a Physics Research Center. It will have about 1,000 centrifuges for research, but it will not have any enrichment, R&D associated with enrichment, or fissile material for 15 years.

*The IAEA will have regular access to all of Iran’s nuclear facilities, including Natanz and Fordoo.

*Inspectors will have access to the supply chain that supports Iran’s nuclear program, monitoring materials and/or components to prevent diversion to a secret program.

*Inspectors will have access to uranium mines and continuous surveillance at uranium mills, where Iran produces yellowcake, for 25 years.

*Iran has agreed to implement the Additional Protocol of the Nuclear Non-Proliferation Treaty.

*Iran will implement an agreed set of measures to address the IAEA’s concerns regarding the Possible Military Dimensions (PMD) of its program.

*Iran will redesign and rebuild its heavy-water research reactor in Arak, based on a design agreed by the 5+1 Powers, which will not produce weapons-grade plutonium.

*Iran will not build any additional heavy water reactors for 15 years.

*Iran will receive sanctions relief, if it verifiably abides by its commitments.

*The architecture of US nuclear-related sanctions on Iran will be retained for much of the duration of the deal and allow for snap-back in the event of significant non-performance.

*All past UN Security Council resolutions on the Iran nuclear issue will be lifted simultaneous with the completion by Iran of nuclear-related actions addressing all key concerns.

*US sanctions on Iran for terrorism, human rights abuses, and ballistic missiles will remain in place.