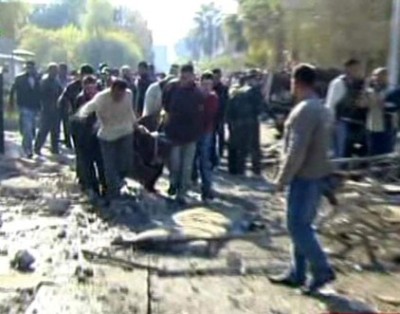 EA has learned, from sources close to the incident, that “many” medical staff and patients were killed on February 21 when a hospital in President Assad’s ancestral town in western Syria was bombed.

The hospital is in Qardaha in Latakia Province, where President Assad’s father and predecessor Hafez was born. The town has a large statue of Hafez al-Assad in its center, and a huge mausoleum with his grave and that of President Assad’s older brother Basil.

Unverified reports claimed on February 21 that the hospital was struck by a suicide bomber driving an ambulance, killing four people. However, sources close to the hospital say that a series of IEDs (improvised explosive devices) were attached to the building and detonated by remote control.

State TV reported the attack at the time, but gave no details of casualties. A faction called Tajamu’ Nusrat al-Mathlum claimed responsibility.

The assault shook the Assad regime. It contributed to the firing, hours later, of the head of Political Security, Rustom Ghazaleh.

Just after his dismissal, Ghazaleh was seriously injured. Sources vary as to whether he was hit in the shoulder by a gunshot or by shrapnel from an explosive in his hometown of Qarfa in Daraa Province in southern Syria.

A memorial service was held on Tuesday in Mashhad in Iran for seven Afghans killed fighting alongside President Assad’s forces in Syria.

Among the dead was the commander of the Afghan volunteer Fatemiyoun Brigade, Alireza Tavassoli, who was killed in Daraa Province in southern Syria on Saturday.

Iranian authorities have recruited Afghan refugees to fight in Syria, given them a reported $500 a month and residency

Rebels say numerous Iranian and Afghan fighters, as well as Hezbollah members, have been killed in recent Syrian offensives in the northwest and south of the country.

Video: Protest Against Jabhat al-Nusra in al-Laj in Idlib Province

A protest on Monday in al-Laj in Idlib Province in northwest Syria against the Islamist faction Jabhat al-Nusra:

Civilians throughout the province have complained of harsh rule by Jabhat al-Nusra members in areas controlled by the group, including detentions and beatings.

The protests have been reinforced in the past week by fighting between Jabhat al-Nusra and another rebel faction, Harakat Hazm.