Syria Daily, March 16: 83 Killed on Sunday as Regime Steps Up Bombardment of Douma 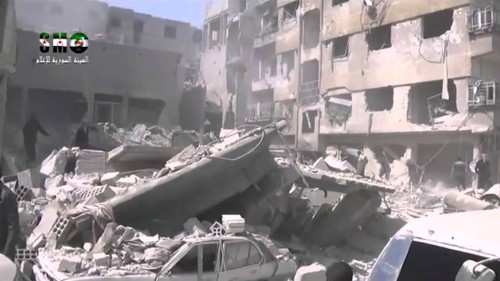 At least 83 people were killed across on Sunday across Syria, as the Assad regime stepped up its bombardment of Douma, the key suburb northeast of Damascus.

The Local Coordinating Committees reported that 55 of the deaths were in or near Damascus, amid the fourth straight day of intense bombing of Douma, the base of the leading rebel faction Jaish al-Islam.

One of the victims, a bridge in her wedding dress, is lifted from the rubble: 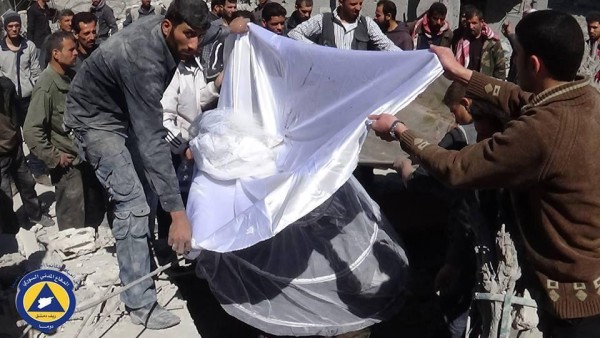 Sixteen people, including 10 women, were killed in the air raids before yesterday’s spike in the death toll.

Last month, about 250 people were slain and hundreds wounded as the regime tried to break opposition and “persuade” the remaining civilians to leave the area so it could proclaim a humanitarian victory over the rebellion. The effort was checked when Jaish al-Islam fired more than 100 rockets into Damascus at military targets and threatened to repeat the launches if bombing persisted.

The rebel faction repeated the warning days before the latest airstrikes; however, there has been no sign of the rockets so far.

Claimed footage of Alloush with Douma residents on Sunday amid the destruction:

Douma has been in opposition hands since October 2012. Its capture would deal a serious defeat to Jaish al-Islam, whose leader Zahran Alloush is the military commander of the Islamic Front bloc, and would assist the regime campaign to retake Jobar in northeast Damascus, which has held out against months of air attacks and ground offensives.

President Assad hosted Iranian Economy Minister Ali Tayyebnia on Monday, with general statements on cooperation but no word on the future of massive aid from Tehran to prop up the Syrian regime.

Assad referred to the pressure of “the blockade imposed on the Syrian people and destruction of the country’s infrastructure”, while hailing “the support provided by the friendly countries…boosting the steadfastness of the Syrian people”. 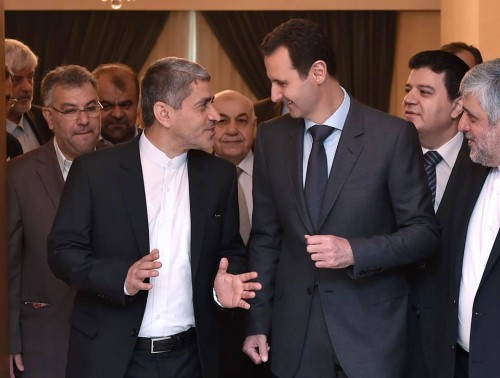 Syrian State media said Tayyebnia expressed “his country’s full readiness to transfer its experience in the fields of development, technology and engineering to Syria”. However, there was no reference to the future of a $3.6 billion line of credit from Iran, agreed in July 2013, which may be near expiration.

The credit has been essential for the Assad regime to provide food and energy, but Damascus has been under pressure even with the Iranian assistance.

Picture: Shells of Buses Used as Shelter in Aleppo

The shells of disused buses, stood on end, serve as a makeshift shelter in opposition-held Aleppo: 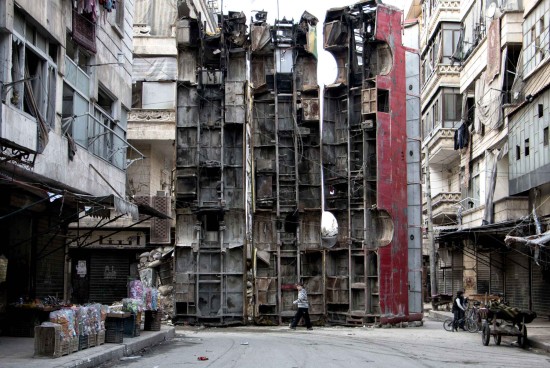 Osama Abu Zayd, a legal consultant to the Free Syrian Army, has dismissed US Secretary of State’s John Kerry statement calling for “political negotiations”, with President Assad at the table.

Kerry’s interview, broadcast on Sunday, has been mis-reported by mainstream media as an American acceptance of Assad’s continuing rule. However, Abu Zayd used a series of tweets to make clear that the opposition will never negotiate without a commitment to the removal of the President.

We were surprised by the remarks of the US Secretary of State that coincided with the fourth anniversary of the Syrian Revolution, taking into consideration more than 200,000 martyrs and thousands of detainees….

America is a sovereign state and can hold negotiations with whatever parties they desire. We aren’t concerned with the will of any country, or opposition body unless it is compatible with the interests of the Syrian people. We will defend ourselves against the Assad regime by all means and to the last drop of blood.

We refuse to succumb to any kind of pressure and we will go to negotiations only when we feel that these negotiations will lead to a real solution that would topple the head of the killing regime.

The legal advisor called for the supply of sophisticated weaponry to the Free Syrian Army “to create better conditions” for a resolution of the four-year crisis.

Abu Zayd also said Kerry was ignoring “the active Iranian military support for the Assad regime in the battles of Dara’a, Aleppo, and Ghouta countryside [near Damascus]”.