Iran Feature: Is the Supreme Leader Suffering from Terminal Cancer? 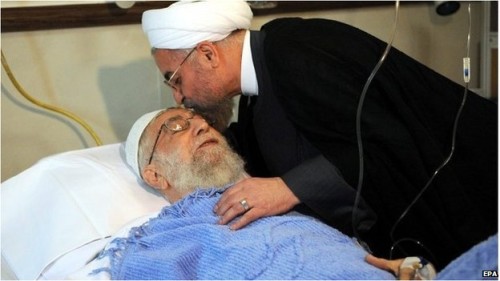 Without citing any sources, Le Figaro said that prostate cancer, which Ayatollah Khamenei has had for “many years”, had “spread to other parts of the body” and was now Stage 4.

Rumors have long circulated about the Supreme Leader’s ill health. In autumn 2009, soon after the protests over the disputed Presidential election, he disappeared from public view for a time, feeding claims of cancer. The stories were also being spread by contacts of US Embassies in the region.

The sources in Iran said this week that the rumors of terminal cancer are widespread in Tehran and other Iranian cities; however, they have no confirmation of the news.

The latest assertion may be linked to an imminent political decision with significance for the future of the Supreme Leader’s position and the Iranian regime.

Within the next two weeks, former President Hashemi Rafsanjani is likely to stand for the leadership of the Assembly of Experts, the body that chooses the Supreme Leader.

Last month, Rafsanjani repeated in an interview that he favored the replacement of the Supreme Leader with a council after Ayatollah Khamenei’s death. He claimed that the current Supreme Leader favored that plan just before he was appointed in 1989, but had been persuaded to take the position rather than pursuing the adoption of a council.

Rafsanjani’s statement was serious enough that it brought a rebuke from Ayatollah Movahedi Kermani — a Tehran Friday Prayer leader and a possible candidate to head the Assembly of Experts — that no one should challenge the position of the Supreme Leader.