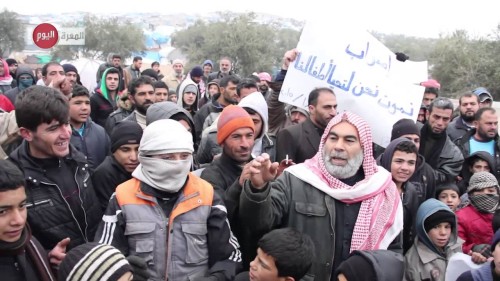 Displaced Syrians in camps near the Turkish border have protested and gone on hunger strike over poor living conditions.

Activists said thousands of residents began the strike on Monday, demanding improvement in the shelter and conditions and more support for food and medicine. The protests have been spurred by cold, heavy snow and rain flooding the sites and roads, and strong winds that blew away tents.

A protest in a camp near Atmeh today:

The protest is centred in a collection of 48 camps near Atmeh in Idlib Province in northwest Syria. Insurgents and Turkish troops have evacuated some displaced to the Turkish side of the border, but many are still caught in the conditions.

The UN now estimates that there are 7.6 million internally displaced Syrians, as well as 3.8 million refugees. The country’s pre-war population was about 22 million.

Trying to recover from his defeat in November by the Islamist faction Jabhat al-Nusra, the leader of the Syrian Revolutionary Front has insisted that he will continue his fight.

Jamal Maarouf’s forces were pushed out of northwest Syria after clashes with Jabhat al-Nusra. Maarouf claims that the “extremists” are trying to vanquish “moderate” groups. Jabhat al-Nusra and some activists and local residents accuse Maarouf and some of his forces of corruption and war profiteering.

Since the defeat, Maarouf — promoted by the US Government and media last year as a “moderate” leader of the insurgency — has used Western outlets to warn of the threat of Jabhat al-Nusra.

His latest statement insists that the SRF will not deviate from the attempt to overthrow the Assad regime.

He denied that he has sought asylum in a European country: “I have entered Syria many times…..Everyone here knows me by real name and face, not like [Islamic State leader Abu Bakr al-] Baghdadi or [Jabhat al-Nusra leader Abu Mohammad] al-Joulani.” However, he said that he would stay out of Syria for the moment as “he wanted people to compare situation after his departure with what [happened] when he was in the area”.

Maarouf denied that any corruption in the SRF led to its defeat or that it had killed civilians or the leader of rival factions.

Iranian media put out the template line that Ahmadi was “defending the Seyyeda Zeinab Shrine in Damascus”. In fact, he died while commanding Syrian forces during an insurgent offensive against two key regime villages north of Aleppo. 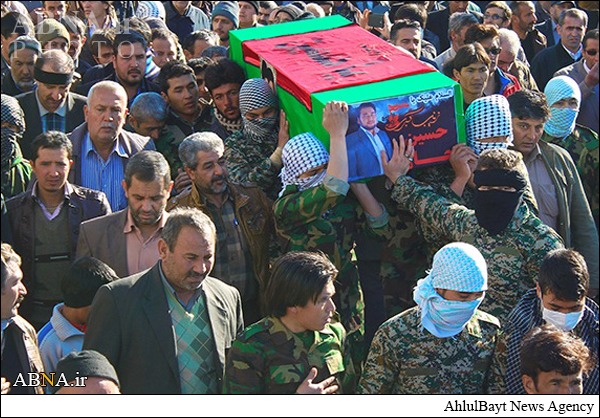 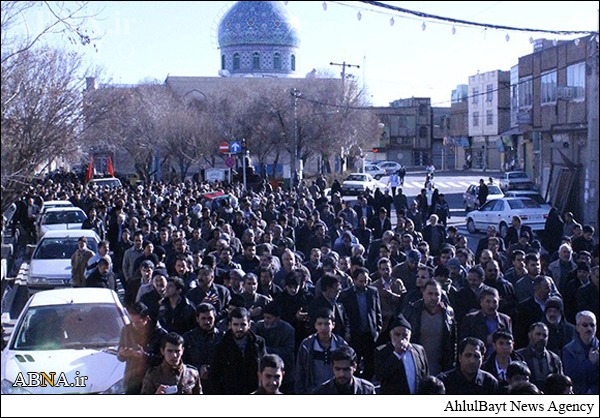 Insurgents have claimed a further advance near the besieged regime airbase at Abu al-Duhur, south of Aleppo, taking the town of Tel Salmo.

#JAN released pictures for their fighters in the outskirts of #AbuAdhuhur Airbase after they took #TallSalmu village. pic.twitter.com/igC4l9wy8O

On Tuesday, the insurgents said that they have cut off drinking to the base, seizing territory to the southeast.

The offensive includes Jabhat al-Nusra, the Islamic Front, and Free Syrian Army units. It has picked strength since the insurgency’s takeover of the Wadi ad-Deif base in Idlib Province last month.

State media continues to proclaim regime victories in the area: “A military source said that the army targeted terrorists’ hideouts and concentrations in the area of Hallouz, Tal Salmo, Talab, and al-Houti in Idlib countryside and killed and injured scores of terrorists.”