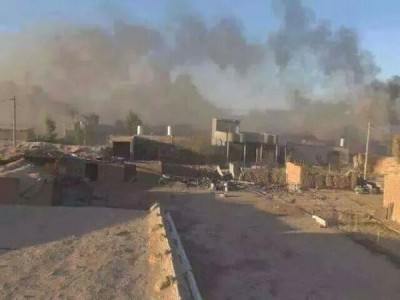 PHOTO: Smoke rises over parts of Hasakah in eastern Syria after regime shelling

UPDATE 2330 GMT: The Kurdish militia YPG have issued a statement saying that “severe clashes” with regime forces continue in the east of Hasakah and near the National Hospital in the city center. The YPG claims Kurdish civilian areas are being attacked by tanks and heavy weapons.

The YPG asserts that “dozens of Syrian regime forces” have been killed, while saying that two of its militia and four local policemen have died.

UPDATE 1730 GMT: Regime forces have been trying to reclaim territory inside Hasakah, including shelling of the neighborhood of Salhiya.

Pro-regime activists claims that Syrian troops and militia have retaken a main roundabout and the fire station on the frontline of the fighting with Kurdish militia:

Meanwhile, Kurdish activists say they will defend their areas against regime attacks:

#Kurdistan: women in the Salhiya neighborhood of #Hasakah pick up arms to defend their homes from the #Assad regime pic.twitter.com/w4Exu6zDYD

Fighting has broken out in Hasakah, one of the largest cities in eastern Syria, between Kurdish militia and Syrian forces.

A de facto non-aggression arrangement between the two sides broke down this weekend when negotiations collapsed over Kurdish journalists and municipal workers who have been detained. Syrian soldiers and militia took control of buildings in a demilitarized area.

When the Kurdish side arrested 30 pro-regime militia — before or after the Syrian military’s move into the demilitarized zone is unclear — Assad forces attacked checkpoints and shelled Kurdish neighborhoods in Hasakah. There were also reports from Kurdish outlets of shelling of the fire station in Hasakah and a Kurdish police station in Mifî village.

Claims circulated that the Syrian Air force hit a convoy of the Kurdish militia YPG moving to Hasakah from the city of Qamishli. In response the YPG began surrounding the regime-held airport in Qamishli.

The number of casualties is unknown, although reports have circulated of civilians being killed by the shelling and of two Syrian troops slain in the fighting.

The Kurdish YPG militia and Syrian forces have fought periodically during the 46-month conflict, especially in 2012 and 2013, but the two sides had effectively agreed to share control in Hasakah.

The city is part of the area which Syrian Kurds hope will long become an autonomous region, or even independent. Last year, Syrian Kurdish groups declared three cantons in northern Syria.

Jabhat al-Nusra is claiming the downing of a Syrian cargo plane near the besieged Abu al-Duhur airbase, south of Aleppo:

Further photos, including graphic images of casualties among the aircrew, have been posted on a JustPaste page.

The Islamist faction tightened the siege of the base this week with the capture of a village just to the southeast, cutting off the supply of drinking water. It is not clear whether the cargo plane was leaving the base or trying to bring supplies and reinforcements into it.

Local activists Hadi Abdullah said he was beaten by the fighters at the offices of Radio Fresh. He and other activists said Jabhat al-Nusra officials later apologized and promised they would punish those who raided the station.

Kafranbel has been an iconic center of the Syrian opposition in the 47-month conflict, known for its banners during Friday protests: 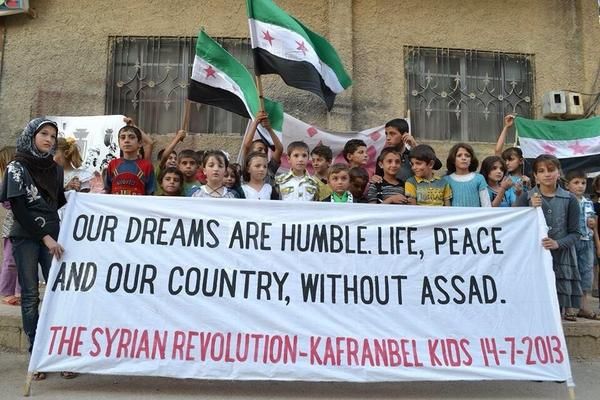 Al Jazeera English reported that 70,000 Syrian refugees living in camps near the Lebanese town of Arsal cannot leave without special permission from the Lebanese Army.

Amid the snows of this winter, there are worries about shelter, food, and medicine.

There has been periodic fighting in Arsal since members of the Islamic State and Jabhat al-Nusra briefly seized parts of the town last August. Pushing back the insurgents, the Lebanese military also hit the camps with shells, setting tents ablaze and killing scores of refugees.