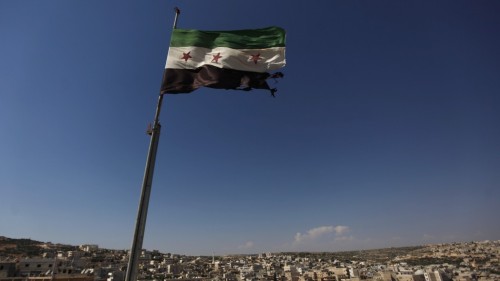 Ibtaa is near the Brigade 82 base, which was taken by insurgents last weekend:

Regime warplanes have been bombing throughout the province today:

UPDATE 1845 GMT: Having cleared the area north of the base of the 60th Engineer Battalion — captured on Monday — up to the next town, insurgents have turned east and are now fighting regime forces on the outskirts of the town of Izraa.

UPDATE 1300 GMT: The next objective for the insurgents — the town of Izraa on the main highway between Damascus and the Jordanian border:

Izraa, a Canaanite city mentioned in the Bible, has a population of about 20,000. Most residents are Christians.

UPDATE 1200 GMT: Insurgents have taken another regime base and surrounding villages in Daraa Province in southern Syria.

The opposition fighters, who announced a renewed offensive in Daraa last week, claimed the 60th Engineering Battalion’s base as well as the areas of al-Suhayliah, al-Dali, Tal al-Dali, and Hajiz al-Kaziya this morning (see map).

Even as President Assad has told a US magazine, “Even today we don’t have a problem militarily”, insurgents are heralding a series of victories this weekend across Syria.

The Free Syrian Army, the Islamic Front, and the Islamist faction Jabhat al-Nusra were all involved in the operations. They include:

*the capture of a regime base south of Damascus, threatening to cut a main supply line and raising the prospect of a challenge closer to the capital;
*the takeover of a hill north of Aleppo, pushing back long-running regime attempts to cut off insurgents in Syria’s largest city;
*rocket fire against military installations in Damascus;
*support of Kurdish forces in their expulsion of the Islamic State from Kobane, near the Turkish border.

The latest successes come on top of a steady insurgent advance across southern and the capture of some of the last major regime positions in Idlib Province in the northwest. They also follow Israel’s missile strike last week that killed senior Hezbollah and Iranian commanders assisting the Assad regime.

1. THE CAPTURE OF THE BRIGADE 82 BASE, SOUTH OF DAMASCUS

After months of attacks and fighting for a key line from Damascus to southern Syria and the Jordanian border, insurgents moved into the Brigade 82 base this weekend.

The Free Syrian Army, the Southern Front, and Jabhat al-Nusra all announced the victory.

Raw footage of the fighting:

The leader of the insurgency’s Umari Brigade marching through the base:

The base is near the key town of Sheikh Maskin, which insurgents held this winter despite sustained regime attacks. Its takeover opens up the possibility of an insurgent advance on a ring of Syrian military positions south of the capital.

THE TAKEOVER OF AL-BREIJ HILL, NORTH OF ALEPPO

In a blow to regime attempts to cut off the opposition-held area of Aleppo, insurgents took al-Breij hill and its sawmills over the weekend:

The hill is between the key town of Handarat, on the main route into east Aleppo, and the Sheikh Najjar industrial area held by the regime since last spring.

Jaish al-Islam, a leading faction in the Islamic Front, carried out its promise to launch rockets on military positions inside Damascus on Sunday. Reports said more than 50 rockets were fired.

The faction said on Friday that it would attack in response to regime bombing of civilian areas of insurgent-held East Ghouta near the capital. It warned civilians to avoid checkpoint and military installations and to observe a curfew.

Regime forces responded with mortar fire, especially from their position on Mount Qasioun.

State media claimed that three civilians were killed and more than 30 wounded by “rockets and mortars”.

A Jaish al-Islam announcement of an attack on the al-Dumair base and officers complex in Qutaifah, 40 km (25 miles) east of Damascus:

A Jaish al-Islam PR video of “more than 100 rockets” fired on the Syrian military:

4. ASSISTING THE KURDISH VICTORY OVER ISLAMIC STATE IN KOBANE

Kurdish commanders said this weekend that they have expelled the Islamic State from all but four streets in Kobane, the Kurdish center in northern Syria near the Turkish border.

The jihadists have been attacking the city since September, at one point holding more than 40%. However, the Kurdish forces have been pushing back and took a key hill outside Kobane last week.

Free Syrian Army units assisted the fight-back with attacks on the Islamic State in a pocket of territory, including the National Hospital, that it held in western Kobane.

Kurdish forces have completed the expulsion of the Islamic State from Kobane, near the Turkish border, after four months of attacks by the jihadists.

The Kurdish Democratic Party (PYD) and supporters marked the victory on Twitter:

The YPG militia raised the Kurdish flag over Tel Arab-Pinar, the eastern-most hill in Kobane, on Monday.

Kurdish commanders said over the weekend that the Islamic State had been pushed back into four streets in eastern Kobane.

At one point the jihadists held more than 40% of the city.

Clashes Between Turkish Forces and Insurgents at Bab al-Hawa Crossing

The insurgent-controlled Bab al-Hawa crossing on the border with Turkey has been temporarily closed, following clashes between Turkish soldiers and insurgents.

The confrontation started when a Turkish soldier strip-searched the wife of a Jaish al-Mujahideen fighter. Casualties are reported on both sides.

As the regime tries to check insurgent advances and to break resistance near Damascus, the civilian toll from airstrikes continues its recent climb. The Local Coordination Committees report 76 deaths on Sunday, including 30 in Damascus and its suburbs, 23 in Daraa Province, and 16 in Aleppo Province.