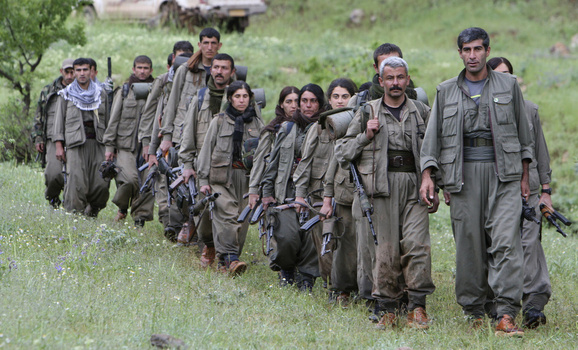 With negotiations stalled between the Turkish Government and the Kurdistan Workers Party (PKK), a top Kurdish official has warned of renewed violence.

Cemil Bayik, the President of the Kurdistan Communities Union, said, “If attacks against the Kurdish people continue, the PKK will again step in.”

Bayik said the PKK has requested an international mediator, for example, the US, to help restart peace negotiations that began in late 2012.

The official said the example of Kurdish autonomous enclaves in Iraq set a precedent: “After this, [autonomy in] Turkey will come onto the agenda, and Kurds need to be granted an [autonomous] status. But Turkey has been doing its best to stop Kurds achieving autonomy in Syria.”

Senior PKK officials have threatened to escalate their operations against Turkish security forces, after Ankara prevented Turkish Kurds from entering the Syrian Kurdish enclave of Kobane to defend it against the attacks of the Islamic State.

The settlement process is ongoing and will continue under all circumstances. We are waiting for the next phase of negotiations [in the process]. This deadlock needs to be rapidly overcome.

In contrast to Bayik’s proposal for an international mediator, Onder indicated that the HDP would prefer to conduct the peace process without any foreign intervention.

Meanwhile, the retired police chief of Bingol in eastern Turkey, Ercan Tastekin, warned that the PKK is trying to establish itself in cities, after violence amid protests last month.

At least 38 people were killed during the demonstrations challenging Ankara’s refusal to support Syrian Kurds in Kobane.