Syria Daily, Nov 13: Insurgent Leader “US Bombed Us To Abort the Revolution” 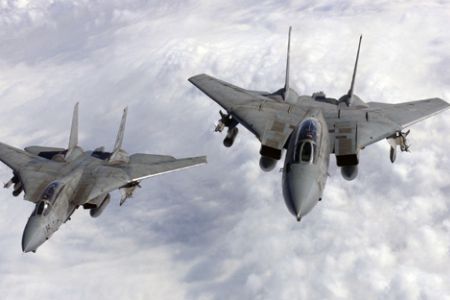 Analysis: Obama Calls for Review of US Strategy — and Heads for a Dead End

A leader of Ahrar al-Sham, one of the largest factions in Syria’s insurgency, has accused the US of bombing its headquarters in an attempt to “abort the Revolution”.

The Islamist faction Ahrar al-Sham was formed from groups in northwest Syria in 2011. It is part of the Islamic Front, the largest insurgent bloc. Despite the deaths of much of its senior leadership in an explosion in September, it remains an important force in the opposition.

Earlier this month, the US carried out a second wave of attacks on Jabhat al-Nusra which — unlike Ahrar al-Sham — has recognized the guidance of Al Qa’eda and is listed as a “terrorist organization” by Washington. During those attacks, American warplane hit Ahrar al-Sham’s headquarters near the Bab al-Hawa crossing on the Turkish border.

Mohammed Talal Bazerbashi, a founder of Ahrar al-Sham, said in an interview posted on Wednesday:

Two people were martyred. We consider this an unjustifiable and inexplicably hostile act, and we see it as an attempt to abort the revolution of our steadfast people while ignoring the true criminal, which is the Assad regime….

Consider the way the bombing took place, the complete destruction of the headquarters, and the way the rockets struck one after the other. These are all signs that point to the possibility of this being the [US-led] coalition’s work.

Bazerbashi, also known as Abu Abderrahman al-Souri, condemns the US intervention as “a transgression against the will of the people and an attempt to impose an American vision on the Syrian people”. He asserts:

Our enemy is Bashar al-Assad and his criminal regime. And anyone who supports this regime or who struggles to preserve its heavy burden upon the Syrians, instead of standing with them as they to seek liberate themselves from oppression and dictatorship, he is the enemy of our people.

A funeral procession in Tartous in western Syria for regime soldiers killed by the Islamic State in this month’s fight for the al-Shaer gas field in the center of the country: 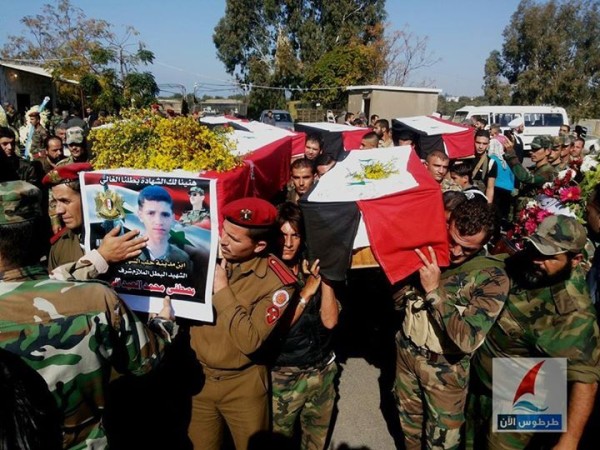 Unconfirmed reports say that about 70 soldiers were buried and that up to 150 Syrian troops were killed when the Islamic State briefly occupied the gas field, one of Syria’s largest, at the end of October.
Islamic State fighters took control of the Shar gas fields November 3, killing between 100 and 150 regime soldiers and capturing two tanks and stores of heavy weaponry before the regime recaptured the fields November 6.

The Shar fields are considered among the largest gas fields in Syria. They took on greater strategic importance to the regime—already struggling to meet energy needs in areas under its control—following IS’s takeover of the majority of the oil fields in Syria’s oil-rich eastern Deir e-Zor province in July.

Residents return to Nawa, south of Damascus near the main highway to the Jordanian border, after insurgents took control of the town:

The insurgent victory last week both checked the Syrian military in southern Syria and opened up the possibility of an insurgent campaign to cut off the capital from the south.

A “police source” said four others were injured near Mhardeh.