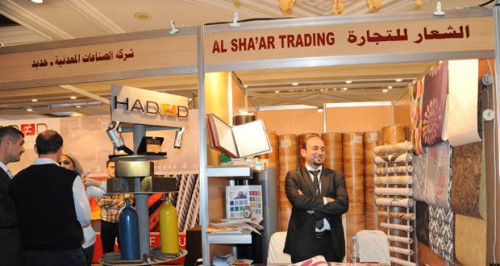 With much of Syria damaged by a 44-month conflict and almost half of its population displaced, the Assad regime has held its first “Exposition for Reconstruction”.

State news agency SANA explains that “The Syrians Build Syria”, organized by the Syrian International Marketing Agency, opened with the participation of 40 local companies in a Damascus hotel on Monday.

Public Works Minister Hussein Arnous declared, “There are local skills, expertise, and capitals that can carry out reconstruction with the help of companies from friendly countries.”

Muwafaq Tayyara, the director of SIMA, saw the fair as part of the regime’s strategy for victory over the insurgency, including “reconciliation” through local ceasefires, as it could “help lay the foundations of the coming reconstruction stage”.

The fair will last three days “in the fields of building and construction, real-estate, architecture, energy, technical consultations, infrastructure, mechanics, banking, transport, and insurance, in addition to showcasing equipment and technology related to reconstruction”.

Millions of Syrians are at risk of water shortages as regime forces attack a Damascus suburb with a major spring, and insurgents cut the water supply in retaliation.

The Syrian army attacked Ein al-Fijah, about 15 km (10 miles) northwest of Damascus, last Friday. “Rebels cut off drinking water to some neighborhoods in Damascus…and reduced pumping in other areas”, according to Hadi al-Manjid of the pro-opposition Orient News correspondent in Deir al-Asafir, told Syria Direct Monday.

The main spring provides drinking water to Damascus, including the well-off districts of Mezzeh and Malki which are home to many regime officials, and insurgent-controlled suburbs.

Video from the area: